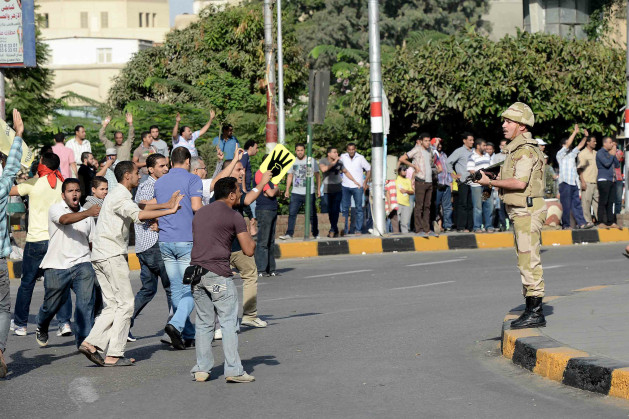 A solider trying to stop a protest by Muslim Brotherhood supporters in Cairo. Credit: Hisham Allam/IPS.

CAIRO, Nov 7 2013 (IPS) - Demonstrations have been at the heart of historic upheavals in Egypt since January 2011. But a newly proposed law that seeks to regulate protests could imperil one of the biggest gains of the Arab Spring revolution here: freedom of expression.

The protest law, approved by the military-backed government Oct. 9 in the backdrop of violent protests, entails fines of up to 42,000 dollars plus imprisonment for offenders. It now awaits the assent of interim President Adly Mansour.

Its supporters say that passing a law to regulate demonstrations was necessary to prevent the country from sliding into daily chaos.

“When the demonstrators are Sisi’s supporters, the protests are legal and when they are his opponents, they are a crime."

But human rights groups, Islamist parties and other opponents of the military-backed dispensation call it a huge setback for hard-won public freedoms.

“This law will arouse the anger of many revolutionary and worker groups that make their voices heard through peaceful demonstrations,” said Dr. Khaled Alam El Din, former advisor to Mohammad Morsi, Egypt’s first democratically elected president who was ousted in a military coup Jul. 3.

Morsi’s supporters see the draft law as an attempt by the Commander of the Armed Forces, Abdel-Fattah El-Sisi, to silence all voices in Egypt that condemn the coup.

“Sisi wants to pass this law to restrict freedom of expression and suppress his opponents,” El Din told IPS. “The Egyptian political elite and private media are completely tight-lipped. No one dare criticise these dictatorial policies.

“Such an oppressive law will eventually explode in the face of all those involved in passing it. If this situation continues, it will be the final nail in the coffin for the 2011 revolution, one of the biggest gains of which was freedom of expression.”

Some point out the irony of such a law in Egypt.

“Have they (those in the government) forgotten that they too came to power through demonstrations?” asked Amr Bakly, a rights activist.

It was mass protests that led to the overthrow of president Hosni Mubarak, who had been in power for nearly 30 years, in 2011. The coup against Morsi, a face of the Muslim Brotherhood that played a key role in the revolution, also came after widespread demonstrations.

“When the demonstrators are Sisi’s supporters, the protests are legal and when they are his opponents, they are a crime? This is a shame,” Bakly told IPS.

Calling it an “anti-protest law”, 17 national human rights NGOs, in a joint statement, said it is “a permission to kill” demonstrators and opponents of the military regime.

Comprising 21 articles, the proposed law requires Interior Ministry permission five days before any demonstration, and gives senior police officials the right to cancel, postpone or relocate demonstrations as well as to ban sit-ins.

According to it, demonstrators will be prohibited from gathering in certain areas, overshooting the permitted duration of the protest, exposing the public to danger, blocking roads, or causing any disturbance to traffic.

The draft law also makes it mandatory for demonstrators to maintain a minimum distance of 50 metres between the protest site and vital installations.

“(If this becomes law) people can be imprisoned and charged with treason if they take the matter to international courts,” Bakly said.

The draft law faces harsh criticism from some within the government, including Deputy Prime Minister Ziad Bahaa El Din.

Human rights activists see it as a revival of the law which Morsi’s government had tried to bring in unsuccessfully.

“Sisi’s law is worse than Morsi’s, and both were looking to empower themselves. The military seeks to set up a police state whereas the Brotherhood had been seeking a religious dictatorship,” Bakly told IPS.

Some politicians and writers, however, say the protest law will help regulate demonstrations and provide stability and security.

Since the Egyptian army deposed Morsi, thousands of his supporters have protested across the country. Many have been killed and injured. The latest flare-up occurred on Oct. 6 when 60 people were killed in clashes between supporters of the Muslim Brotherhood and the security forces.

“Opponents of the law want the country to be lost in chaos,” said Soliman Gouda, a well-known columnist. “The state must control outlaws and criminals who are disturbing public life through demonstrations.

“The Brotherhood’s demonstrations have resulted in Egyptians being denied the grace of democracy, especially after pro-Morsi protestors resorted to riots, violence and attacks on public and private enterprise,” Gouda, former editor in chief of Al-Wafd newspaper told IPS.

“Establishing rules for organising demonstrations does not mean restricting freedoms; this interpretation is completely misleading.”

Fatah, who was arrested in 2008 for two weeks, told IPS: “The law will not affect public freedoms if it is formulated in accordance with international conventions and under the supervision of a specialised committee of elected parliament members.

“But if it shackles the hands of people and stops them from expressing their opinions, no doubt it will end the process of freedoms in Egypt forever.”