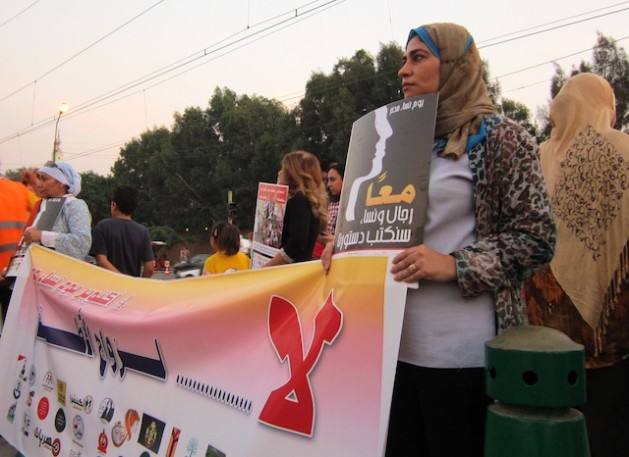 CAIRO, Oct 25 2012 (IPS) - During the uprising that toppled Egyptian dictator Hosni Mubarak women stood shoulder to shoulder with men in Cairo’s Tahrir Square, pressing the revolution’s demands for freedom, justice and dignity. But those who hoped the revolution would make them equal partners in Egypt’s future claim they may be worse off now than under Mubarak’s authoritarian rule.

“After the revolution, most of Egyptian society – and especially the Islamists – began attacking women’s rights,” says Azza Kamel, a prominent women’s rights activist. “They started to claw back rights that women had fought for and gained before the revolution, and are trying to change divorce and custody laws, push FGM (female genital mutilation), and reduce the age of marriage from 18 to nine years old.”

Kamel says women have been almost entirely excluded from leadership and decision-making positions since Mubarak’s ouster. The Committee of Wise Men, an advisory panel formed during the uprising, included just one woman among its 30 members. There have been no women appointed as governors, no women allowed in the authoritative State Council, and weak female representation in all post-Mubarak governments.

“We expected more,” Kamel laments. “There can be no democracy without equality, yet women are being excluded at every step.”

Women were granted the right to vote in 1956, but have historically been underrepresented in Egyptian political life. The country’s first free and fair parliamentary elections resulted in further setbacks. Women won just eight of the 508 seats in the now dissolved lower house of parliament, down from over 60 in the 2010 parliamentary elections when a quota was in place.

Political parties established since Mubarak’s ouster in February 2011 welcomed women as members, but appeared unwilling to gamble on them as candidates when it came time for elections. Electoral laws required all parties to field at least one female parliamentary candidate, but even liberal parties placed the women far down their candidate lists, weakening their chance of success.

“All of the political parties are using women for political leverage,” Kamel told IPS. “This has always been the case in Egypt.”

Many women saw the writing on the wall when President Mohamed Morsi reneged on his grandstand promise to appoint a female vice-president. The former Muslim Brotherhood leader has so far surrounded himself with an almost exclusively male corps of advisors, while the only two women in his 35-member cabinet are holdovers from the previous government.

But more worrying, says Kamel, is that the Muslim male-dominated constituent assembly tasked with drafting a new constitution for Egypt is in a position to enshrine discriminatory limitations on women in the national charter. Not only are women almost entirely excluded from the constitution writing process, the assembly is stacked with Islamist figures who activists claim are attempting to impose their conservative religious values on all Egyptian society.

Many of the constituent assembly’s liberal and secular members resigned in objection to what one described as “a set will to produce a constitution that would be the cornerstone of a religious state, which will preserve the principles of the fallen regime and ignore the pillars of the Egyptian uprising of freedom, dignity and social justice.”

One particular point of contention is the wording of Article 68 in the draft constitution, which states that women are equal to men in political, economic, and social life provided that equality does not contradict the provisions of Sharia (Islamic law). Rights groups have opposed the article’s ambiguous religious framing.

Nehad Abu Komsan, director of the Egyptian Centre for Women’s Rights (ECWR), explains that Sharia has in many instances been used to reinforce negative social attitudes towards women and impose restrictions on their freedom. Linking women’s rights to undefined provisions of Islamic law “opens the door to radical interpretations that can be used against women.”

“Sharia can be interpreted in many different ways,” says Abu Komsan. “Saudi Arabia considers Sharia as a reference (in its constitution) and prohibits women from driving a car, while Pakistan considers it a reference and had a woman leading the country.”

Although Egypt’s Islamist-led government has not completely ignored women, its policy changes have focused on paving the way towards a more conservative, patriarchal society. A recent ministerial decree allowed female flight attendants of state-owned EgyptAir to wear hijab (Islamic veil) for the first time, while new rules have extended the option to female television presenters.

“This is good, as wearing the veil is a personal right,” says domestic worker Umm Gamal, who is veiled herself. “But what we really need is to see more effort toward protecting the right of women to full participation in society. We should be 50 percent (in all leadership positions), not just a quota or novelty.”