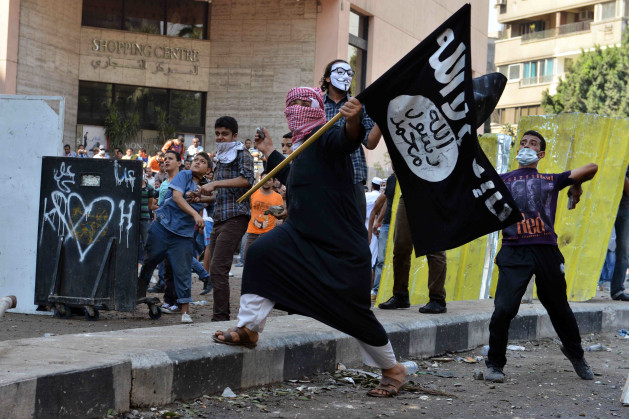 The Muslim Brotherhood has its own army of the young that will not easily be defeated. Credit: Hisham Allam/IPS.

BERKELEY, California, Sep 29 2013 (IPS) - Gory social media images that fueled the global Jihadist influx into Syria 18 months ago are back. But this time the outpouring is coming from Egypt.

Pictures on Facebook and Twitter show dozens of bodies wrapped in white burial sheets lying in rows in morgues, hospitals and even mosque hallways. Others show charred bodies with the victims’ brains visible from sniper shots to the head. Most of the posts urge one thing: justice.

"There's a valid fear that some of them may turn to violence after they have despaired that democracy could ever be a means towards meaningful change.” -- Sami Al-Dalaal

“Our self-control now is not out of fear. It’s out of respect for human blood and for the safety of our country,” said one post on an Islamist Facebook page. “If we are pushed too hard and our back is to the wall, we’ll defend ourselves.”

Three months after a Jul. 3 military coup that removed Egypt’s first elected government, hundreds of anti-coup activists have been killed, thousands injured and many more, mostly Islamists, thrown behind bars without charge or trial. The achievements of the country’s brief two-and-a-half years of freedom have been all but erased.

Amnesty International estimates that at least 1,089 people were killed in just four days – the period between Aug. 14 and 18 during the military operation to disperse anti-coup protestors at Rabaa square and Al-Nahda square in Cairo.

Weeks later, the military crackdown is still raging, with casualty numbers reportedly rising almost by the day, prompting calls for self-defence among the country’s targeted Islamists.

Al-Qaeda’s ideology of violence as the only path to change, which was discredited by the mostly peaceful changes of the Arab Spring in Egypt, has now received a new lease on life as a possible and viable option after all, according to several observers of Islamic political movements.

“We followed Western democracy prescriptions to the letter, but the minute a Muslim man comes to office, the world looks away. Nobody really respects democracy,” said one Islamist’s Facebook page.

The urge to resist the bloody crackdown has been most pronounced among young people. In private discussions, many of them, especially from the Muslim Brotherhood, the country’s largest Islamist organisation, express frustration with their leaders for preaching gradual rather than “revolutionary” change.

Some activists described the top policy-making body of the Muslim Brotherhood, the Group’s Shura Council, as “dervishes”, an Arabic word connoting being detached from reality.

“The Iranian revolution model might not be so bad after all,” said one activist who asked not to be identified.

The current military crackdown is so ruthless, sweeping and indiscriminate that it has become a personal daily story for many young people, especially the Islamists. There’s hardly anyone who hasn’t had a brother, father or sister killed, arrested or tortured since the coup, the activist said.

If the young decide to take up arms, it will be on a massive scale. Senior Muslim Brotherhood leader Salah Sultan, before his arrest earlier this week, estimated the group’s active membership to be between 800,000 and a million, not including their families and sympathisers.

Pressure on Islamists towards self-defence comes from unlikely outside corners as well.

The militant Somali Shabab group, which was at the receiving end of preaching from the Muslim Brotherhood that violence was counter-productive, got a chance for payback.

In August, the Somali militant group issued a statement taunting the Brotherhood and urging them to condemn democracy. The call was spurred by the scenes of carnage against defenceless anti-coup protestors in Cairo.

“You are leading Muslims to extermination by your insistence on democracy,” the Shabab said.

The pressure on the Brotherhood’s aging leadership has been so intense since the coup that Essam Erian, parliamentary majority leader before the coup, had to issue several audio messages urging a continuation of “peaceful protests”.

On Sep. 25, the Muslim Brotherhood issued a statement insisting on “peaceful resistance”.

“We all should resist the coup and resist oppression peacefully and without any violence and in a civilised manner,” the group said. “The coup leaders and the oppressors want to create waves of violence that they can use as a cover for their murderous police practices that they excel at.”

Elder Islamists justify their pacifist position on the grounds that there are religious admonitions against bloodletting. From a political standpoint, taking on the U.S.-backed and armed military and their pro-government militias will drag both sides into a civil war that would only strengthen U.S. and Israeli hegemony, they argue. Impoverished and violence-torn Somalia is hardly a model, they say.

“Democracy is still the main option for most Islamists now,” Sami Al-Dalaal, an expert on Islamic movements in the Middle East, told IPS. “Yet there’s a valid fear that some of them may turn to violence after they have despaired that democracy could ever be a means towards meaningful change.”

“There’s a precedent to that. When the military thwarted democracy in Algeria after Islamist democratic wins, they found no option but to start an armed revolution,” he said.

Dalaal was referring to a bloody civil war two decades ago in Algeria that started after army generals launched a coup and denied the Islamists the chance to take power in elections. Some 100,000 people died in the violence that ensued. The Syrian pro-democracy protests also started peacefully until Bashar al-Assad reacted violently and bloody pictures went viral on social media, starting another civil war.

In Egypt, with the military showing no sign of letting up on use of excessive force, it might be only a matter of time before at least some young Egyptians decide to do what their elders have refused to do: defend themselves.