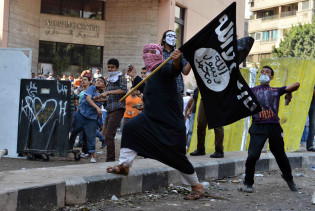 By Emad Mekay
So here I am, an Arab journalist in Silicon Valley, where four out of every four people I meet believe Facebook invented the Arab Spring. Three more weeks here and I may start to hallucinate that Mark Zuckerberg was a Cairo-slums native named Hassouna El-Fatatri, who rotted in a Mubarak prison for advocating personal privacy rights.

By Emad Mekay
Egypt, routinely the cradle for new Arab and Islamic ideologies, is now witnessing the birth of yet another line of thought - Islamic Liberalism. The term is touted now as a panacea for the eight-month impasse that has locked Islamists and their secularist rivals in bitter bickering over how this Arab nation should be governed after the fall of former dictator Hosni Mubarak earlier this year.

By Emad Mekay
Egypt’s most organised political group, the Muslim Brotherhood, is tapping crowds as a new financing method for its nascent TV station and media outlets to be able to compete with well-oiled challengers in corporate and government- run media.

By Emad Mekay
The World Bank, which has often pressed borrowing nations to adopt more robust financial transparency regulations, has refused to disclose the financial records of one of its senior officials despite allegations of corruption, abuse of authority and mismanagement of public funds while he served as a minister under the now toppled Hosni Mubarak regime in Egypt.

By Emad Mekay
Egypt's transitional military rulers reiterated Monday their pledge to hand over power to a civilian elected government and denied they are seeking to carve out a patriarchal role in the country's future political life.

By Emad Mekay
Egypt has cancelled plans to borrow 3 billion dollars from the International Monetary Fund because of conditions that violated the country’s national sovereignty and a public outcry that warned against terms that were blamed for impoverishing many Egyptians.

By Emad Mekay
Egyptian officials are warning that the country, just emerging from a popular uprising that ousted the regime of former President Hosni Mubarak, could be facing a major economic crisis with lagging international aid and foreign investment.

Egypt Hunts Down the Right to Love

By Emad Mekay
Abeer Fakhry, a young Christian woman, had only wanted to live with a man who would love and respect her, and not with her abusive husband. But within months of trying to escape her marriage, and her faith, Abeer finds herself chased by her family, by the Orthodox Christian Church, by the fundamentalist Islamic Salafi Group and, lately, by Egypt’s top army generals.

By Emad Mekay
Egypt is stepping up its wheat production in a bid to stem the country’s rising dependence on foreign imports that escalated during the 30-year rule of former President Hosni Mubarak, who was ousted in February.

By Emad Mekay
Anger at Egypt’s privatisation programme, involving the transfer of billions of dollars worth of public assets to private hands, aided the Egyptian revolution that elbowed the Western-backed Hosni Mubarak out of office in February, a top army general said.

By Emad Mekay
Egyptian authorities have opened dozens of criminal investigations into hundreds of millions of dollars worth of public land contracts that were awarded illegally to real estate developers associated with former President Hosni Mubarak without proper procedures at below market rates.

By Emad Mekay
The revolution contagion sweeping across the Arab countries has spread to Syria leading to rare protests challenging the grip of the ruling Baath Party on the country. The regime was quick to describe the turmoil as a foreign-inspired plot aimed at punishing the country for its support of groups opposed to U.S. and Israeli policies in the region.

By Emad Mekay
The much-feared secret police and intelligence service that protected the regime of former Egyptian president Hosni Mubarak by arresting, torturing, and even killing opponents has started a wave of burning documents and evidence that could incriminate them, as calls escalate for abolishing the force altogether and bringing its officers to justice.

By Emad Mekay
The brutal response by Libyan leader Muammar Al-Gaddafi against pro- democracy protestors in the country indicates his determination not to leave office without a bloody battle, but his moves follow the path that eventually led to ouster of two neighbouring dictators.

By Emad Mekay
Libyan leader Muammar Al-Gaddafi has unleashed the bloodiest crackdown so far against pro-democracy protestors seeking his ouster, killing dozens of people in only four days of protests.

Egypt Takes a Step Back From IMF Ways

By Emad Mekay
Egypt could soon be looking for a new economic model – one that will be different from the traditional system that has been promoted for years by international financial institutions such as the World Bank, the IMF, and the U.S. Agency for International Development (USAID), under the reign of ousted president Hosni Mubarak.

By Emad Mekay
The movement for change sweeping across the Middle East has now rocked Libya. Thousands of people have taken to the streets across many cities to demand an end to the 41-year autocratic rule of maverick leader Muammar Al- Gaddafi.

EGYPT: Labour Anger Does Not End With Mubarak

By Emad Mekay
Before his ouster on Friday, toppled Egyptian President Hosni Mubarak had made one of the biggest mistakes of his reign; not learning from the lessons of hundreds of small labour and professional strikes that littered the country since 2005. These were the actual precursors to the Jan. 25 Revolution that end his 30-year autocratic rule.
Next Page »
ADVERTISEMENT ADVERTISEMENT