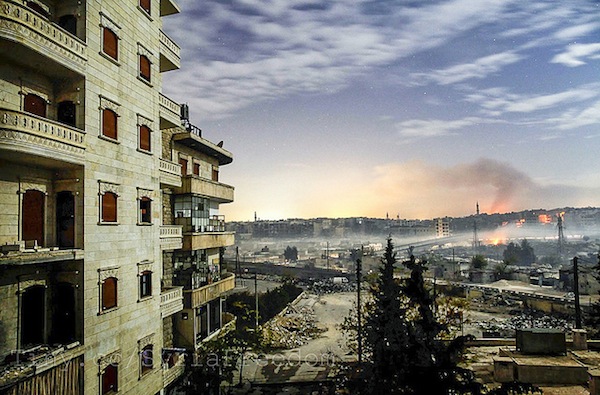 Smoke rises from districts in Aleppo, Syria, in December 2012. Credit: Freedom House/CC by 2.0

LOS ALTOS, California, Jun 16 2013 (IPS) - Saudi Arabian religious scholars are leading an increasingly vocal chorus of Islamic preachers who are urging Muslims and Arabs to support Syrian rebels against what they say are atrocities at the hands of Iran-backed Shiite forces of Syrian President Bashar al-Assad.

On Friday, the imam of the Grand Mosque in Mecca, Sheikh Saudi Al-Shoreym, issued a rare appeal to Muslims to provide help “by all means” to Syrian rebels and civilians trapped in the Syria conflict.

Popular Saudi Sheikh Mohammed Al-Erify used his guest sermon in a central mosque in Cairo, Egypt to appeal to thousands of worshippers to back groups fighting the Assad regime and urged his audience to enlist in jihad.

On Thursday, dozens of Islamic religious scholars, mostly from the Gulf, gathered in Cairo to study plans to call for an international appeal for jihad in Syria.

On Jun. 4, Al-Arabiya, a Saudi-financed television channel that is usually liberal, hosted conservative leader Sheikh Youssef Qaradawi, who is based in Doha, Qatar, to urge support for jihad against Hezbollah forces who are fighting alongside Assad’s forces in Syria.

The spike in religious appeals come weeks after the Iran-backed Shiite militias of Hezbollah buffed up its intervention in Syria and forced rebel forces out of the strategically important city of Al-Qusair.

Rebels had held Al-Qusair for months. The city’s fall marked a shift in the balance of power since rebels took up arms in December 2011 and expelled government troops from several cities.

Syrian government-controlled media are reporting that Assad’s forces are advancing towards the rebel stronghold of Homs, while the Iranian news agency Fars said last week that the Syrian army is gaining the upper hand in different parts of Syria.

Calls for jihad by Sunni scholars against Assad, who as an Alawite is a member of a minority branch of Shiite Islam, come as the United States signalled its willingness on Thursday to send arms to rebels in Syria, saying crossed a “red line” by using chemical weapons against his own people.

Over the past several weeks, Arab media have been dominated by eyewitness testimonies on the ground of an influx of Iran-inspired Shiite fighters form Iraq, Lebanon and Iran into Syria to buttress the Assad regime, reports that highlight the increasing sectarian tension underlying the conflict.

Sunni Muslim scholars blame Iran and Hezbollah for turning the conflict between the Assad dictatorship and his people into a sectarian war.

The rebellion initially started as peaceful pro-democracy protests in the city of Dera’a, in the early months of the Arab Spring that saw the fall of several other dictators. The protests quickly deteriorated into a war that has cost the lives of close to 93,000 people, according to the United Nations.

Shoreym’s Friday sermon was broadcast live on several pan-Arab television channels. The Saudi preacher is widely respected in many Sunni Muslim countries and his sermons and Quran recitals often heard in public places as well as in households.

In his emotional sermon, Shoreym broke into tears as he recalled the plight of civilians, women and children in Syria.

“Women lost their husbands, the children made [into] refugees and their homes turned into rubble by the forces of aggression and tyranny,” he said. “This makes all of us obligated to lend a hand to help.”

In the past Shoreym has rarely commented on politics, in keeping with the Saudi government’s line to keep Islamic holy sites in Mecca and Madina away from politics as much as possible.

His sermon marked a notable departure from that policy, indicating the seriousness of the situation in Syria.

In Cairo, Al-Erify’s one-hour sermon focused on the need to join jihad. “Modern history has never seen such massacres as those that have been committed by that regime over the past 40 years,” he said.

Al-Erify, a religious preacher with best-selling books and popular TV shows, warned that if the Iran-led Shiite alliance succeeds in Syria they will go after “Muslim children in other countries” and “slaughter them like they did in Syria”.

Erify, Shoreym and Qaradawi’s appeals are the latest in a string of religious edicts, or fatwas, urging people to resist Assad forces in Syria.

On Thursday, dozens of Sunni Islamic scholars, mostly from the Gulf, gathered in Cairo to declare an “urgent appeal for jihad” in Syria and to rally public support for fighters there.

“That conference will have an impact on the ground for sure,” said Gamal Sultan, editor of Al-Mesryoon newspaper in Cairo. “The world imagined that they can sell the Syrian people cheaply to the tyranny of Assad. Religious leaders are out to prove that notion wrong.”

The conference attendees, including Ahmed Al Tayeb, grand sheikh of Al-Azhar, the bastion of Sunni Islam and the seat of its most prestigious religious studies mosque in Egypt, watched a documentary showing Hezbollah and Syrian forces committing atrocities against civilians in conflict areas.

A statement on the website of the International Union of Muslim Scholars, the pan-Islamic non-governmental organisation that ran the conference, said the meeting was designed to “show the real face of Iran, Assad regime and Hezbollah”.

Some of the attendees of the conference later on Friday met with Egyptian President Mohammed Morsi to try to garner his support for the jihad drive. The following day before thousands of supporters and religious leaders in a Cairo stadium, Morsi announced a number of steps against the Syrian regime, including cutting all relations with Damascus.

Social media that were instrumental in launching the Arab Spring are now being used as a vibrant platform both to showcase the Syrian regime’s abuses and to call for jihad against Assad.

Earlier this week, a crude video on Youtube showed young people trying to rescue a young Syrian woman lying in the middle of the road, half-naked and injured after reportedly being raped by pro-Assad forces. One by one, the youths are shot by Assad’s forces as they try to help, and the woman is not believed to have survived.

Facebook pages share gory scenes of children, their throats slit, and masses of bodies, including children, lying under rubble. “While you are sitting flipping through your Facebook, children are dying in Syria,” said one post.