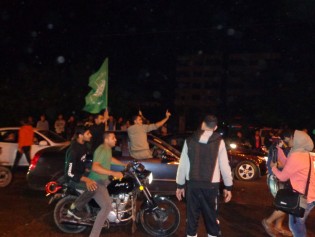 OP-ED: Saudis Should Welcome a U.S. Move Toward Iran

By Thomas W. Lippman
Shortly after President Obama’s startling telephone conversation with Iran’s new president, Hassan Rouhani, a Saudi Arabian journalist wrote that “The phone call between Obama and Rouhani shocked the Gulf states, Jordan, Turkey, Israel, and other countries.” No matter which president initiated the call, he wrote, “What is important to know is what stands behind the conversation and how deep the ties are between America and Iran.”

By Pierre Klochendler
Israel is being drawn into Syria's quagmire as it threatens to act further on transfers of "game-changing" weapons to hostile protagonists involved in Syria's civil war, be they Lebanese Shiite militia Hezbollah, Jihadist Sunni rebels, or loyalist forces of President Bashar al Assad.

Bulgarian Charge of Hezbollah Bombing Was an “Assumption”

By Gareth Porter
Bulgarian Interior Minister Tsvetan Tsvetanov’s dramatic announcement Tuesday on the Bulgarian investigation of the July 2012 terror bombing of an Israeli tourist bus was initially reported by Western news media as suggesting clear evidence of Hezbollah’s responsibility for the killings.

Israel Pins Bombing on Hezbollah to Get EU Terror Ruling