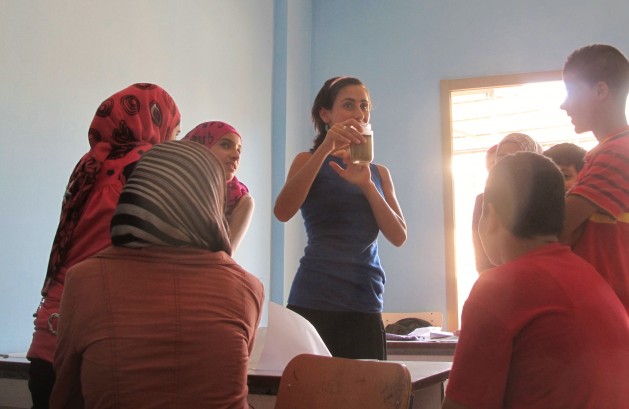 BEIRUT, Aug 1 2014 (IPS) - The Shatila Palestinian camp has no library, nor does adjacent Sabra or Ain El-Hilweh in the south. And, after recent statements by Lebanon’s foreign minister, some fear that the thousands of Syrian refugee children within them will soon have even slimmer chances of learning to read and write.

The United Nations stated earlier last month that Syrian refugees would total over one-third of Lebanon’s population by the end of 2014, and that at least 300,000 refugee children were not enrolled in school.

In early July, Foreign Minister Gebran Bassil said that no assistance should be given to Syrian refugees as “all this aid – be it food, shelter or health care – encourages Syrian refugees to stay in Lebanon, while what we want is to encourage their speedy exit.”

“The overcrowded breezeblock camps are filled with school-age children from across the [Lebanese-Syrian] border, suffering from psychosocial disorders, nutritional problems and limited possibilities for enrolling in Lebanese educational institutes

During his time as energy minister in the previous government, Bassil had said that Syrians should be seen as a “threat to the safety, economy and identity of the country.”

Tangled electrical wires droop dangerously low and posters of Syrian president Bashar Al-Assad are prominent alongside those of Palestinian ‘resistance’ leaders and ‘martyrs’ in the Lebanese capital’s camps, where refugees are said to have initially been welcomed.

Lebanon’s security forces do not enter the 12 officially registered Palestinian camps in the country despite withdrawal from a 1969 agreement granting the Palestinian Liberation Organization (PLO) control over them.

Several Syrians told IPS they feel more comfortable there than they would in areas controlled by Hezbollah, which is fighting alongside the Syrian regime and whose political wing is part of the government.

With 10,000-20,000 having arrived since the conflict began, refugees from Syria now outnumber the original inhabitants of Beirut’s Shatila camp, set up in 1949 to shelter stateless Palestinians.

The overcrowded breezeblock camps are filled with school-age children from across the border, suffering from psychosocial disorders, nutritional problems and limited possibilities for enrolling in Lebanese educational institutes.

There than the capacity of the public school system capacity, the most obvious hurdle for refugee children, says Fadi Hallisso, co-founder and general manager of the Syrian-run NGO Basmeh & Zeitooneh which works in the camp, is that Syrian public schools teach in Arabic while their Lebanese counterparts use either French or English.

Destitute or missing parents leading to the need to work or beg to survive, transport costs and war-induced trauma are other factors at play, and the problem is compounded by nutritional deficiencies.

A UNICEF study found earlier this year that severe acute malnutrition had doubled in certain parts of the country between 2012 and 2013. It noted that almost 2,000 children under the age of five were at risk of dying if they did not receive immediate treatment, while even milder states of malnutrition stunt children’s physical and mental growth.

Basmeh & Zeitooneh has set up a school in Shatila for about 300 students using the Lebanese curriculum taught by Syrians and Palestinians, who are paid between 400 and 700 dollars a month, according to Hallisso, “which no Lebanese teacher would be willing to work for.”

The facilities have been newly renovated and are in a building with a Médecins Sans Frontières (MSF) clinic and dispensary on the second floor.

The organisation is trying to get funding for a small library where the children can come, read, consult reference works, use computers and find a space open to them with generator-powered electricity.

Maria Minkara, who works with Hallisso, told IPS that it would be open to both Palestinian and Syrian schoolchildren and that not a single library exists in the entire area housing tens of thousands of inhabitants.

Many of the children, she noted, live in dark, unhealthy environments, cut off from the power grid with no physical space in which to study. A walk through the crowded camps makes this obvious.

The Joint Christian Committee for Social Service in Lebanon, another organisation working with refugees, recently succeeded in obtaining permission for about 120 Syrian refugee children from its school in the Ain El-Hilweh camp near Sidon to return to Damascus for their 9th grade and Baccalaureate exams, Executive Director Sylvia Haddad told IPS. Over 83 percent of them passed, she said.

Haddad admitted that several students’ families had refused to allow their children to go back to Syria out of fear of the regime, but said that “’they are regretting that decision very much now.”

Stressing that all politics and religion were kept out of the instruction of refugee children, Haddad said that questions on the curriculum being used by the group were referred to Abu Hassan, a Palestinian inhabitant of the camp who in the manner of militia fighters in the region uses an alias preceded by ‘Abu’ (‘father of’).

Abu Hassan said he had fought in the Palestinian ‘resistance’ in the past but declined to say with which faction, and denied that any pro-regime rhetoric was contained in the textbooks.

Abu Hassan was allowed to accompany the students to Damascus and back, but recent changes in Lebanese law make it harder for Palestinians fleeing Syria to enter Lebanon. Amnesty International published a report last month denouncing the restrictions, which require ‘pre-authorisation’ from the government or a residency permit.

Regulations regarding Syrian refugees also changed at the beginning of June, limiting entry to those coming from areas near the Lebanese border where fighting is under way and stipulating that refugees who cross back into Syria forfeit the right to return.