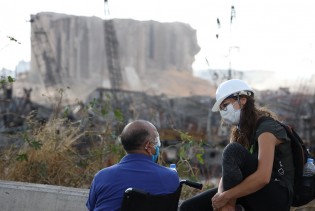 By Oriol Andrés Gallart
In front of Osman Bin Affan Mosque, in a central but narrow street of Beirut, several tank trucks are being filled with large amounts of water. The mosque has its own well, which allows it to pump water directly from the aquifers that cross the Lebanese underground. Once filled, the trucks will start going through the city to supply hundreds of homes and shops.
Next Page »
ADVERTISEMENT ADVERTISEMENT