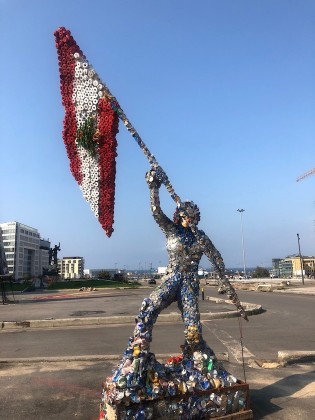 By Mona Alami
Every day Lebanon is being plunged further into a state of general insecurity, as chaos from the war in Syria seeps across the border.

By Mona Alami
Though most Lebanese take great pride in their national education system, deep sectarian rifts in public schools have made it impossible to ignore the political and religious fragmentation of society or its long-term impacts on youth.

By Mona Alami
The Arab Spring brought a host of new actors to the political stage. In Jordan, it pushed the Salafists to the fore, where some of the group’s more radical elements are now calling for holy war in neighbouring Syria.

By Mona Alami
The Arab Spring sent scores of sick and injured Libyans, fleeing their war- torn country, straight to Jordan, where the influx of patients is putting a lot of pressure on Jordanian hospitals and disrupting the lives of Libyan and Jordanian patients alike.

By Mona Alami
On a warm Friday afternoon, police cars blocked the roads around the Al Husseini mosque, where hundreds of men were kneeling for the noon prayers. At the end of the service, the crowds rose and marched in a compact protest behind a car bearing a banner for the Islamic Action Front (IAF), the Jordanian branch of the Muslim Brotherhood.

By Mona Alami
A few kilometres separate the two Lebanese villages of Ersal and Qaa from the Syrian border, both of which have been unwillingly drawn into the violence of the Syrian uprising. Unrest has been brewing in the region for weeks and recently it was on the receiving end of intermittent gunfire from the Syrian army. The situation remains tense despite the fragile new ceasefire.

Syrian Crisis Spills Over Into Lebanon

By Mona Alami
Chants erupt from the second floor of a decrepit building in Tripoli in the Sunni stronghold of Bab el-Tebbaneh. Young voices loudly sing "Yalla Erhal Ya Bashar," or "Come on, leave, Bashar," directed at the Syrian president, Bashar al- Assad. It has become the anthem of the Syrian revolution.

LEBANON: Could a New Civil Law Unify a Divided Society?

By Mona Alami
Odette Klysinska, a Catholic French native, sits in her living room in an affluent neighbourhood in Beirut, clutching her will in one hand, shocked to learn that it is no longer legally valid in the country she now calls home.

By Mona Alami
As the Syrian uprising enters its tenth month, the country’s economy is suffering. Since last March, the Syrian government has been cracking down on pro-democracy protests, and the once peaceful uprising has morphed into a full-blown armed rebellion in areas such as Homs, Hama and Jabal al-Zawiya.
Next Page »
ADVERTISEMENT ADVERTISEMENT