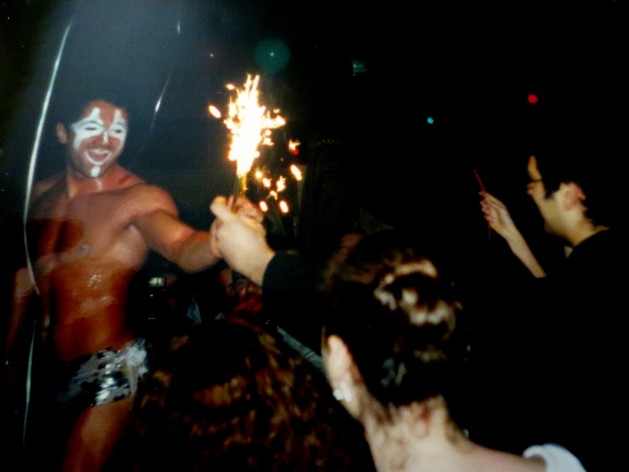 BEIRUT, Aug 24 2014 (IPS) - In a country where civil liberties remain the prerogative of the powerful and wealthy, the Lebanese gay scene is to be treaded carefully.

The recent arrest of 27 members of the lesbian, gay, bisexual and transgender (LGBT) community shows that those not so lucky – those belonging to the more vulnerable tranches of society – are always at risk of experiencing the darker side of Lebanon.

On August 9, a raid targeted Hamam Agha, a popular public bath in the hipster Hamra area in the capital Beirut. Of the 27 men arrested, “there are still 14 non-Lebanese in detention, in spite of the fact that the judge has ruled they should be released,” says Ahmad Saleh, an activist from Helem, a Beirut-based NGO, advocating LGBT rights at parliamentary level.

While the struggle to change the law continues in Lebanon, the country has scored points in terms of the advocacy of legal rights. In January 2014, Judge Naji El Dahdah of the Jdeideh Court in Beirut dismissed a claim against a transgender woman accused of having a same-sex relationship with a man.

The judge stressed that a person’s gender should not be based on their personal status registry document, but on their outward physical appearance and self-perception.

The Lebanese Psychiatric Society issued a statement in early 2013 saying that: “the assumption that homosexuality is a result of disturbances in the family dynamic or unbalanced psychological development is based on wrong information.”

And in 2009, Judge Mounir Suleiman of the Batroun Court decided that consensual relations could not be deemed unnatural.

In addition to advances made on the legal front, the Lebanese public has become more aware of gay rights thanks to changes in mentalities and the promotion of creative works focusing on gay issues.

The media and the art scene have been challenging social norms. Wajdi and Majdi, two gay figures from a comedy TV show called La Youmal, have popularised the image of the LGBT community in Lebanon. Popular TV host Paula Yacoubian has also defended gay rights in Lebanon in a tweet. Mashrou’ Leila, a famous Lebanese rock band, has discussed homosexuality in Lebanon in its songs and last year a Lebanese movie called Out Loud featured five young Lebanese engaged in a group marriage. The movie was nonetheless banned in Lebanon by the censors.

“Youth are becoming increasingly aware of gay issues,” says activist Ghassan Makarem.  Compared with other countries in the region, Lebanese have far more liberal views than their counterparts as shown in a 2013 Pew Research Centre study. Some 18 percent of the Lebanese population believe that homosexuality should be accepted in society, compared with Egypt, Jordan and Tunisia where over 94 percent of the population view homosexuality as deviant.

However, Makarem adds, “despite recent positives, being gay can still mean being the subject of discrimination, from a legal standpoint, especially for those without the right connections or wealth.”