BEIRUT, Jun 3 2012 (IPS) - Though most Lebanese take great pride in their national education system, deep sectarian rifts in public schools have made it impossible to ignore the political and religious fragmentation of society or its long-term impacts on youth. 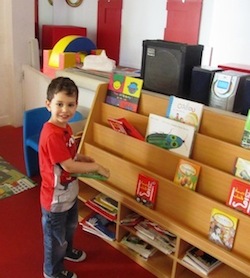 Sectarian rifts have seeped into most public schools in Lebanon. Credit: Mona Alami/IPS

“I do not want to send my daughter to an Islamic school, where she will be forced to wear a veil when she is (just) nine years old. I don’t want that type of lifestyle for her. I would rather scrape every penny I have to send her to a secular school, where she will have the opportunity to mingle with members of other communities,” Dallal, a Shiite resident of south Lebanon, told IPS.

Dallal’s dilemma is not uncommon in Lebanon, where the government officially recognises 18 different sects. Many other mothers living in areas dominated by one of the country’s many religious communities feel the same tension when it comes to their children’s education.

“There is also (segregation) between schools in the north and south, and east and west,” Mona Fayad, professor of psychology at the Lebanese University, told IPS.

Since the end of the 15-year civil war in 1990, different religious groups took root throughout rural areas, dividing society into pockets based on religious affiliation. The only exception is the capital, Beirut, where the historic presence of diverse cultural identities has fostered a higher level of tolerance.

Before 1975 most schools had a diverse student population but during the war, and the exodus of various religious groups, uniformity became the norm in rural public schools. For example, in some Shiite villages in the south, it is not uncommon for students to reach high school without encountering any members of the Sunni community.

Conversely, in Akkar, a bastion of Sunni Islam, Shiites are seen as alien entities and students from the two communities seldom mingle with each other.

“It is not (only) the education system that is at the root of the problem, but the segregation of communities at the school level,” Ali Demashkieh, founder of the NGO Teach For Lebanon, told IPS.

In an attempt to overcome religious hatred generated by years of rivalry among the various Lebanese communities, the 1989 Taif Accord included a special section proclaiming education should be uniform across the country in order to promote national unity. The Accord also called for the creation of a common history textbook for the whole country.

In 1992, a group of educators presented a curriculum they considered suitable for Lebanese of all backgrounds. “The book was published but its distribution to schools was suspended following political disagreements over its content,” Antoine Messara, one of several experts who worked on revamping the education system at the time, told IPS.

Now, over two decades after the end of the civil war, the state still allows Lebanese schools the freedom to use their own history textbooks. Experts like Demashkieh, are concerned that “too much leeway (sometimes) leads to very personal interpretations of history in certain schools”.

Consequently, some institutions are promoting a biased understanding of national history according to their religious affiliation, or the political views of the principal, experts say.

The recent controversy around attempts to scrap the words ‘Cedar Revolution’ from a national middle school history curriculum illustrates the issue. A ministerial committed decided to refer to the revolution, made famous by the one-million strong protests that forced the Syrian army out of Lebanon on Apr. 26 2005, as ‘a wave of demonstrations’, eliciting anger from the country’s politicians who took part in the rallies.

As a result of such disharmony over what constitutes ‘history’, many Lebanese children turn to their family for answers their teachers cannot provide, which worsens the situation.

“Much (historical) knowledge is transmitted through conduits – parents and other family members – and not through schools,” said Messara.

Schools are now also becoming more politicised along religious lines, which is evident in Hezbollah-run institutions, according to researcher Catherine Le Thomas.

“Hezbollah Islamic schools blur the sharp division that is sometimes made between ‘civil society’ and ‘partisan society’. (With) Hezbollah, or a major portion of the Shiite community, this distinction seems to have dissolved. Instead, we observe the establishment of a true ‘resistance society’, supporting the fight against Israel on the outside and promoting the party’s ideals and projects on the inside,” she wrote recently.

Further exacerbating the problem is the fact that Lebanese public schools demand fees for registration and books. In impoverished rural areas, many view religious schools as a more affordable alternative.

“It makes a huge difference for parents if they don’t have to worry about buying books or providing lunch for their children. Also, people who do not send their children to religious schools are perceived as outcasts in small rural societies,” stressed Demashkieh.

He added that many other problems plague the education sector. A 2007 study, for example, showed that primary education completion rates in Lebanon are lower than those in Jordan and Syria, with only 51 percent of students finishing the programme.

Fayad maintains that the education system could act as a powerful tool for fostering national cohesion if public schools integrate to allow students the social interaction necessary to build relationships with peers of other faiths and political backgrounds.

“Religious communities in Lebanon feel they are alone in their painful interpretation of the war,” she concluded. “But all of the 18 communities, with no exception, have felt the same pain.”