Emma Bonino is a leading member of the Radical Party, former European Commissioner and a former Italian Foreign Minister.

ROME, Dec 31 2015 (IPS) - The appalling crisis ravaging the Middle East and striking terror around the world is a clear challenge to the West, but responses are uncoordinated. This is due on the one hand to divergent analyses of the situation, and on the other to conflicting interests. 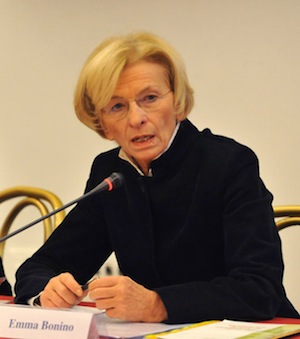 The roots of the conflict lie primarily in the Sunni branch of orthodox Islam, and within this the fundamentalist Wahhabi sect embraced by Saudi Arabia and the Gulf monarchies generally. Both the Islamic State (Daesh) and, earlier, Al Qaeda, arose out of Wahhabism.

The West has historic alliances with the Gulf area, but apparently nothing has been learned from the 3,000 deaths caused by the attack on the Twin Towers in New York. Turkey plays by its own rules, while Russia does not hesitate to resort to any means to recover its position on the global stage, and is only now showing concern about the so-called foreign combatants that Turkey is allowing into Syria. In truth, there is very little common ground.

Consequently, all reactions are inadequate, including the bombing of territory occupied by the Islamic State – whether motivated by emotion or based on reason with an eye to the next elections – by countries like France or the United Kingdom, which wants to demonstrate in this way to the rest of Europe that it is an indispensable part of the EU. Bombings take place, only to be followed by public recognition that aerial strikes are insufficient because there are no more targets to be hit from the sky without guidance from troops on the ground.

The fact is that while the impossibility of achieving victory by air attacks alone is repeated like a mantra, the bombings continue. At the same time, every Arab medium complains daily that these are acts of war waged, once again, by the West against the Arab world.

Doubtless for this reason, the British government has not only increased its military budget but also given the BBC more funding for Arabic language services. The battle in hand is above all a cultural one; arguments are needed over the medium and long term, in addition to attempts at overcoming the contradictions.

The first step is to admit that there is no magical solution; only partial and complex solutions exist. The first measure must be to oblige Sunni Muslims, the Gulf monarchies and the Muslim Brotherhood – the sources of funds and material support for Islamic State combatants – to assume responsibility for their roles. Secondly, we in Europe must take serious measures to address our own shortcomings, by reinforcing our security.

In the meantime, we lurch from one emergency to another, managing only to agree on improvised, temporary measures. For instance, now we have forgotten all about the immigrants, as if they had ceased to exist. Vision is lacking, not only for the long term but even for the medium term.

Now European governments are focused on Syria, leaving aside the conflicts in Libya and Yemen, and are not giving needed help to our Mediterranean neighbours threatened by serious crises: Tunisia, Morocco and Jordan. Lately, oil facilities in the Islamic State are being bombed and the tanker trucks used for black market oil exports are being attacked. As is well known, during the first Gulf War bombing of oil wells brought about an ecological disaster and history is repeating itself in the territories occupied by the Islamic State. Meanwhile the attacks on ground transport are blocking supplies of provisions to Syria, where food is already scarce.

For its part, Italy has done well in choosing not to participate in military interventions that risk being counterproductive and that no one believes are effective, as shown by other scenarios from Afghanistan to the Lebanon. But this does not exempt Italy from making greater efforts toward a common European intelligence service and a broader and more efficacious immigration policy.

In a nutshell: the European Union should formulate and apply its own foreign policy in line with its own interests and reality, and dispense with the policies of the United States, Russia, or other powers.