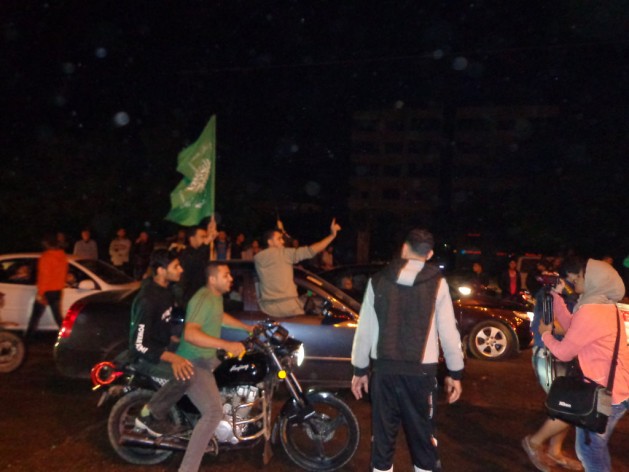 RAMALLAH, West Bank, Jun 16 2015 (IPS) - Israel’s deadly game of divide and conquer against its enemies could be coming home to roost with a vengeance, especially as the Islamic State (ISIS) grows in strength in neighbouring countries and moves closer to Israel’s borders.

Desperate to maintain the calm in Gaza, Israel has been conducting intermittent, off-the-record indirect talks with Hamas through U.N., European and Qatar intermediaries despite vowing to never negotiate with Hamas which it describes as a “terror organisation”.

Israel helped promote the establishment of Hamas in the late 1980s in a bid to thwart the popularity of the Palestinian Authority-affiliated Palestine Liberation Organisation (PLO) which was then also regarded as a “terrorist organisation” and the most powerful and popular Palestinian political movement.

But Israel’s indirect support of ISIS-affiliated Syrian opposition groups could be an even bigger gamble.

“Despite ISIS ultimately being a threat to Israel, it currently fits in with Israel’s strategy of weakening the military capabilities of Iran and Syria, both enemies of ISIS, the same way a previously powerful Iraqi military had threatened Israel”

As the Omar Brigades calculated, the Israel Defence Forces (IDF) responded by attacking Hamas military targets in the coastal territory because they hold the Gaza leadership responsible for any attacks on Israel.

“Israelis, we learn, are essentially being used as pawns in a deadly game of chicken between Hamas and these Salafist rivals,” said Alison Kaplan Sommer, a columnist with the Israeli daily Haaretz.

“The Salafists refuse to abide by the informal truce that has kept the tense quiet between Hamas and Israel since the Gaza war – and Hamas is not religious and fundamentalist enough for their taste.

“Firing rockets into Israel serves a dual purpose for them. It makes a statement that they are true jihadists, unlike the Hamas sell-outs who abide by truces – and it also happens to be an excellent way for them to indirectly strike back at their Hamas oppressors. Why, after all, go to the trouble of attacking Hamas when you can so easily get Israel to do it for you?”

U.N. observers in the Golan Heights have released reports detailing cooperation between Israel and Syrian opposition figures including regular contacts between IDF soldiers and Syrian rebels.

Israel is also regularly admitting wounded Syrian opposition fighters to Israeli hospitals and it is not based on humanitarian considerations.

Israel finally responded by saying the wounded were civilians reaching the border by their own accords but later conceded it was coordinating with armed opposition groups.

“Israel initially had maintained that it was treating only civilians. However, reports claimed that members of Israel’s Druze minority protested the hospitalisation of wounded Syrian fighters from the al-Qaeda-linked al-Nusra Front in Israel,” reported the Global Research Centre for Research on Globalisation.

The Syrian ambassador to the United Nations also complained of widespread cooperation between Israel and Syrian rebels, not only for treatment of the wounded but also other aid.

U.N. observers remarked in a report distributed last year that they identified IDF soldiers on the Israeli side handing over two boxes to armed Syrian opposition members on the Syrian side.

Despite ISIS ultimately being a threat to Israel, it currently fits in with Israel’s strategy of weakening the military capabilities of Iran and Syria, both enemies of ISIS, the same way a previously powerful Iraqi military had threatened Israel.

When the United States began operations against ISIS, a senior Israeli high command seemed reluctant to give any support and called the move a mistake.

It was easier to deal with terrorism in its early stages [ISIS] than to face an Iranian threat and the Hezbollah, he said. “I believe the West intervened too early and not necessarily in the right direction,” he told Haaretz anonymously.

“Israel is pursuing a policy that in the long term will ultimately be self-defeating. In a bid to divide Syria, Israel is supporting ISIS but this will backfire in that ISIS is growing in strength and destroying societies in its path and it will eventually turn its sights on Israel,” Professor Samir Awad from Birzeit University, near Ramallah, told IPS.

It is possible that ISIS could topple future regimes that Israel is hoping for support from, including Syrian rebels who hinted at a peace with Israel once Syrian President Bashar Assad is toppled.

Jacky Hugi, the Arab affairs analyst for Israeli army radio Galie-Zahal who confirmed on the Al Monitor website that Israel was taking the Syrian rebels side in the fighting, had a warning.

“We should stop with the illusions – the day ‘after Assad’ won’t bring about a secular liberal ruling alternative. The extremist organisations are the most dominant factions in Syria nowadays,” said Hugi. “Any void left in Syria will be seized by them, not the moderate rebels.”

“Israel believes that there is no current threat from the rebels as they are too busy with the Syrian war,” Berti told IPS. “However, if we extend the time frame, then the situation could change when Syrian rebels may want to attack Israel from the northern borders.”