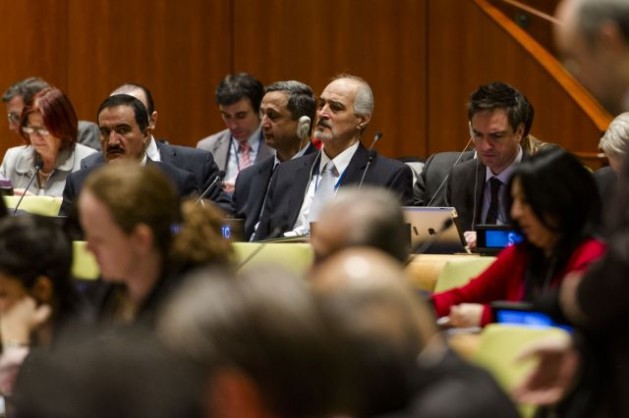 Bashar Ja'afari (centre), Permanent Representative of the Syrian Arab Republic to the U.N., listening during a Feb. 25 briefing on the humanitarian situation in Syria. Credit: UN Photo/Mark Garten

UNITED NATIONS, Feb 25 2014 (IPS) - An inflow of Russian-made weapons. Political and military support from Iran and the Lebanese militant group Hezbollah. Sharp dissension among fractious rebel groups. And the unyielding loyalty of the armed forces.

These are four primary reasons why Syrian President Bashar al-Assad has succeeded in tenaciously holding onto power while battling a mostly Western-inspired insurgency since March 2011, according to Middle Eastern diplomats and military analysts.

"Send money to refugees, decry the violence, and do nothing but kowtow to the Russians on Syria. This is not a policy." -- Paul Sullivan

“The United States and the Western powers have been virtually out-manoeuvred by Assad,” reckons one Arab diplomat, speaking on condition of anonymity.

The Geneva peace talks ended in abject failure last week and unless there is a dramatic change on the ground, Assad will continue to survive, he predicted.

Dr. Paul Sullivan, professor of economics at the National Defence University (NDU) and adjunct professor of Security Studies at Georgetown University, told IPS Assad will go only when his military and intelligence turn on him.

This is where the time-bomb for Assad is ticking, said Sullivan, who is also adjunct senior fellow, Future Global Resource Threats, at the Federation of American Scientists.

He said that weapons, money and help are coming from Iran, Hezbollah and even across the border from Iraq, to the Assad regime. 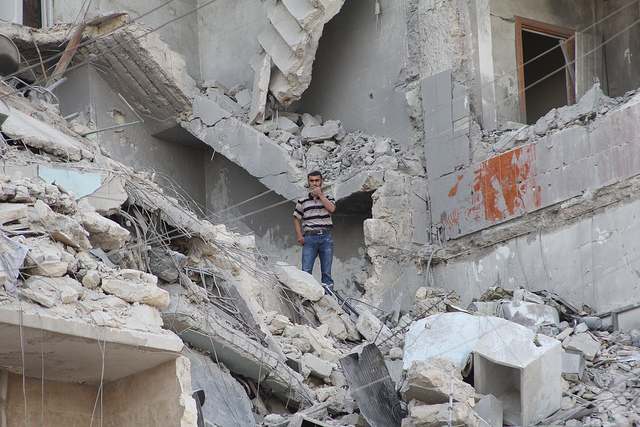 Russian arms exports to Syria are a lot less now than prior to the conflict.

“The opposition movements are split, argumentative and mostly dysfunctional in their attempts to oust Assad,” said Sullivan. “This is more to Assad’s advantage than the arms imports. The opposition are their own worst enemies.”

He said Assad does not need a divide-and-conquer strategy. “The opposition is doing that for him,” he said.

The wide-ranging opposition groups – including the Supreme Military Council, the Free Syrian Army and its splinter group the Syrian Revolutionary Front, the Nusra Front, the Syrian National Coalition, the Islamic Front, and the Islamic State of Iraq and al-Sham – are mostly in disarray.

After Assad’s father, Hafez al Assad, took power in 1971, Syria was linked to the then Soviet Union by a Treaty of Friendship and Cooperation.

William D. Hartung, director of the Arms and Security Project at the Centre for International Policy (CIP), told IPS cutting off the flow of arms from Russia could reduce the savagery of Assad’s war effort, saving lives in the process. For that reason alone, it is worth pushing for, he said.

“But given Assad’s accumulated arsenal and dogged determination to cling to power, it may or may not significantly shorten the war,” Hartung added.

Both the United States and the United Nations have sharply criticised the Assad regime for its air attacks on civilians, and specifically, the use of “barrel bombs” in civilian neighbourhoods. 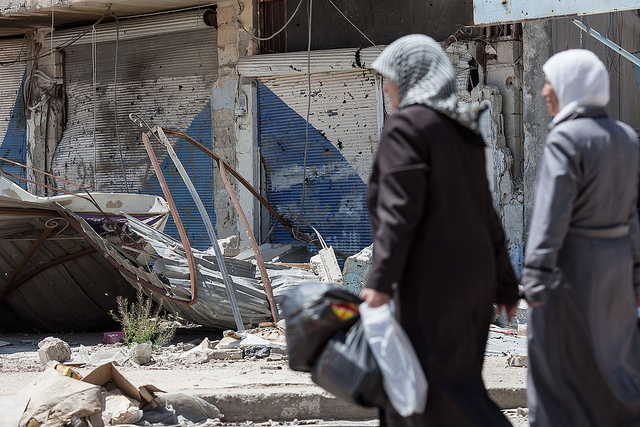 Secretary-General Ban Ki-moon said early this month he was “deeply concerned” about the continued armed escalation, “most deplorably the ongoing aerial attacks and the use of barrel bombs to brutal, devastating effect in populated areas.”

But Russian Ambassador Vitaly Churkin has a different perspective on the attacks: “Everybody’s speaking about barrel bombs, dropped in cities. Sounds pretty horrific.”

He was quoted as saying last week that if civilians are suffering to the scale which is being described, “that of course is a very dramatic thing.”

“But we have to be clear on something: this is not something that’s per se prohibited by international law,” he added, virtually justifying the use of barrel bombs by the Syrians.

Pieter Wezeman, senior researcher in the Arms Transfers Programme at the Stockholm International Peace Research Institute (SIPRI), told IPS, “As far as I know, the barrel bombs are improvised local production. Not something I would expect Russia to deliver.”

Wezeman said all information indicates Russia has been in the past five years, and still is, the main supplier of arms to the Syrian regime.

He pointed out Russia has opposed a U.N. arms embargo on Syria, and Russian officials have regularly stated about the continued supplies of arms to Syria.

“It is however unclear what Russia has been delivering the past year and why Syria has chosen to use improvised bombs and not standard ones purchased from Russia or may be Iran,” he added.

Sullivan described Syria as “a ruined country”. If Assad falls, he told IPS, there is likely to be no united and organised opposition ready to take his place.

“This could lead to great chaos and more conflict in the country,” he noted.

Syria is, sadly, trapped in the worst of all conflict cycles – when there is no way out, given the way the leaders of the relevant parties act and act with each other, Sullivan said.

He said the United States, the European Union and others have approached this situation in “an invertebrate nature”.

Russia has out-manoeuvred the West in so many ways, but those leaders are so clueless they do not even see it, he said.

“Send money to refugees, decry the violence, and do nothing but kowtow to the Russians on Syria. This is not a policy. It is an embarrassment,” Sullivan declared.