CAIRO, May 13 2011 (IPS) - Egypt is stepping up its wheat production in a bid to stem the country’s rising dependence on foreign imports that escalated during the 30-year rule of former President Hosni Mubarak, who was ousted in February. 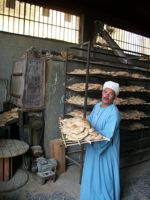 Egyptian officials say the Jan. 25 Revolution brought a new political will that would make it easier for the country to develop local solutions for food crises while resisting outside pressures to buy foreign food imports.

“We could easily end dependence on foreign imports of wheat that make the ‘baladi’ bread,” said Abdelsalam Gomaa, an advisor to the government. “The problem will remain the extra wheat flour needed for other products such as pasta and sweets. We’ll continue to import 6 to 7 million tonnes if we do not grow more land with wheat.”

Mubarak, who maintained power by force and rigged elections, had often offered access to the Egyptian market of 85 million consumers in return for political backing from Western countries – many of which are food and agricultural products exporters.

The country’s move to grow what it needs locally could ease pressure on the domestic budget, create a surplus in the international market, and reduce food prices for other more impoverished global consumers, agriculture experts here say.

The new strategy is centred on offering prices competitive with international rates to lure Egyptian farmers to shift back to growing more wheat, which is essential for making bread, a staple for most people here.

The government said it is buying wheat for 350 Egyptian pounds (59 dollars) per erdab (150 kilogrammes), up from only 270 pounds (47 dollars) last year under Mubarak – a rate so low that farmers had complained that they could not afford new seeds or spend on technologies to compete in the market. Wheat acreage dropped by 5 percent.

According to the ministry of agriculture, under the new pricing system wheat acreage will jump to 3.6 million acres from 2.9 million last year.

The government promised to remove red tape that discouraged the creation of new agricultural companies that grow grains, especially wheat.

Immediately after that announcement, a group of Egyptian expatriates in the Gulf, Europe and the U.S. announced that they would start a new company that would offer shares directly to the public to raise 3 billion Egyptian pounds. The money will be used to grow 500,000 acres of wheat next year.

Egypt has turned to the neighbouring African nation of Sudan for extra arable land, and Sudan has offered one million acres for wheat growing by Egyptian farmers and companies.

For the first time, Egyptian farmers said Tuesday that they have organised to create their own unions, a step they say will help them communicate better with the local authorities rather than leaving the government susceptible to foreign pressures.

The head of the new union Abderhaman Mohamed Shokry told reporters here that his union has plans to help the country reach wheat self-sufficiency by lobbying to change policies of the previous regime that benefited international companies at the expense of local farmers.

But despite the new atmosphere and the road to greater wheat production is likely filled with many obstacles, experts say.

Bakery owners complain that even if Egypt reaches self-sufficiency in wheat production, there will be other problems with delivery, market mechanisms, and lack of government oversight.

Haj Mahmoud, owner of a bakery in 6 October city, 35 kilometres southwest of Cairo, said that subsidised wheat flour ends up being sold on the black market for profit.

A 50-kilogramme sack of subsidised flour bought for 10 pounds is re-sold to confectionery bakeries in upscale areas for 140 pounds. Confectionery and sweets shops sell to the middle classes and the rich, Mahmoud told IPS.

“Many bread bakeries are unscrupulous. They want huge and fast profit so they sell their portions of flour to those who pay instead of making it bread for the poor as the government requires them to,” Mahmoud said. Mahmoud’s bakery goes through 40 sacks of flour each day to make bread.

“Government officials who monitor the distribution of bread flour are poorly paid and can easily be convinced to look the other way,” Mahmoud said, rubbing his thumb and pointer finger together to indicate the possibility of bribes.

Foreign exporters who fear they may lose one of their biggest and most profitable markets will present other obstacles to Egypt’s march toward wheat independence.

USAID has often submitted research that promotes the idea of freeing up wheat land for cash crops. Washington also deploys important promotional tools such as export credit guarantees that facilitate U.S. wheat sales to Egypt. The result has been that Egypt imports at least 10 million tonnes of wheat every year, according to the Food and Agriculture Organization of the U.N. (FAO).

The U.S. Department of Agriculture says that Egypt imported 3.7 million tonnes from the U.S. alone in 2010/2011. That figure is expected to rise in the short-term even with Egypt’s attempts to free itself from foreign wheat.