WASHINGTON, Aug 26 2013 (IPS) - Almost 1,000 Egyptians have died, according to official count, since Aug. 14 when Egypt’s armed forces began cracking down on Muslim Brotherhood-led protests against the military ouster of President Mohamed Morsi. That number well exceeds the 846 people officials say died during the 18 days of protests that ended Hosni Mubarak’s 30-year rule in January 2011. 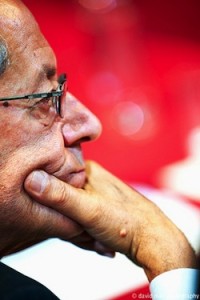 The democratically elected Morsi, a leading member of the Muslim Brotherhood, has not been seen in public since Jul. 3. But Mubarak has been released from prison into house arrest while he faces retrial.

Egyptian media have for the most part adopted the language of the army in framing the unrest – Muslim brotherhood members are alleged “terrorists” who are trying to destroy the country.

While the United States, which the Egyptian media claims conspired with the Brotherhood, has cancelled military exercises with Egypt while calling for both sides to halt violence, it has so far resisted calls to halt military aid to its strategically positioned ally.

Still, the rapid turn of events in Egypt, from a revolution to perhaps a “counterrevolution“, has left U.S. President Barack Obama in a quandary.

In an interview with IPS, Emile Nakhleh, a Middle East expert and former director of the Central Intelligence Agency’s (CIA) Islamic Strategic Analysis Programme, explained why repression would not prevent the Muslim Brotherhood from continuing to be a rooted cultural and political force. Continued repression could also push the Brotherhood’s younger members to embrace violence as a political tool, he said.

The United States should pursue its own interests in Egypt, which “do not necessarily equate with dictatorial repressive regimes,” Nakhleh told IPS. “In the long run, democratically elected governments will be more stable than these autocratic regimes.”

"The United States has got to create a clear balance between national security and our democratic values."

Q: Should U.S. aid to Egypt be stopped?

A: Aid should be cut off. We supported the removal of Mubarak, so we can’t support the resurrection of a military dictatorship. The cut-off by itself is not enough. It should be accompanied by a high-level conversation about Egypt’s future in accordance with the ideas of Egypt’s January 2011 revolution.

In Bahrain, we should make it very clear to [ruling family] Al-Khalifa that repression and exclusion of the Shia majority cannot continue.

A: Don’t forget that most of Egypt’s military aid is spent in this country for weapons systems. But that’s not the main reason for the aid. U.S. military aid to Egypt has been a tool of American national interests, which are to maintain the peace treaty with Israel, give us priority over the Suez Canal and flights over Egypt, etc, and help us with the war on terror, especially since 9/11.

There’s a side interest, too: Egypt’s role with the Palestinians and Hamas and the push for negotiations. The main interlocutor with Hamas over the years has been Egyptian intelligence folks like Omar Suleiman.

Q: So the United States stops the aid. Then what?

A: It’s a two-way street. Consider our national interest, but it’s also in Egypt’s interest to maintain the peace treaty. Even Morsi wasn’t going to touch it. And when there was terrorism in the Sinai, he worked with the Israelis in fighting it.

President Obama’s speech in Cairo in 2009 was important because, at least rhetorically, it reflected the belief that the Islamic world is diverse and there is a distinction between the mainstream majority and the radical minority. We need to engage mainstream Muslims.

He believed in that and has been interested in engaging mainstream parties that have been elected through peaceful and fair processes. That’s why he accepted to work with the Muslim Brotherhood and the Freedom and Justice Party after they were elected freely and fairly.

Q: There was an article in the New York Times on Jul. 10 suggesting that Morsi’s ouster was actually planned early on. What’s your take?

A: Morsi appointed [Abdul Fattah] al-Sisi himself, and al-Sisi turned against him. Elements of the old regime and the so-called Egyptian liberals, who never accepted the election results, plotted from day one to undo Morsi. That’s not to say that Morsi did not make mistakes. He reneged on most of his promises. He promised to include women and Egyptian minorities in the country’s decision-making processes, and he did not.

But the old guard and the military never forgave Morsi for finally removing Field Marshal Mohamed Hussein Tantawi. So even after Morsi’s hard work, he [Morsi] brought in al-Sisi. Al-Sisi pretended that he supported Morsi, but in fact he didn’t. There’s an “unholy alliance” between the military, the old regime and Egypt’s so-called liberals against Morsi. It’s also a fact that the revolution removed Mubarak but it did not dismantle the regime.

So after Morsi came to power, the ministries and their bureaucrats began to torpedo his programme. There were lines in Cairo after the flow of oil was restricted, and somehow they disappeared shortly after Morsi was toppled. Then al-Sisi called on people to come out into the streets to give him a “mandate” to act in the national interest and remove Morsi. In January 2011, people went into the streets to remove Mubarak, and in 2013, by al-Sisi’s request, they removed Morsi.

Very soon they are going to discover that this is a military dictatorship, and they’re going to go into the streets again.

Q: What do Saudi Arabia’s explicit calls to back up the Egyptian military financially in battling the Muslim Brotherhood say about U.S.-Saudi relations?

A: The Saudis are terrified of the Muslim Brotherhood as a reform movement. Now Saudi Arabia is also playing a dangerous game. A coalition of Arab autocrats is trying to stifle democracy because they do not like these revolutionary movements and are terrified of seeing them in their own countries.

That’s why the Saudis sent troops to Bahrain to control the Shia uprising, they said. When no one bought this argument, they said they were battling terrorism. And they say they are trying to kill it in Egypt, which is the main Arab country. If it’s killed there, they will feel more comfortable in their rule.

But this is not about the Muslim Brotherhood in Egypt or the Shia in Bahrain. It’s about reform movements and opposition to repressive regimes in those countries.

Q: What options does Obama have at this point?

A: The president had to face a new reality with the Arab Spring. He decided to go with the pro-democracy movements and that’s why he supported removing the dictators in Tunisia, Libya and Egypt. He has been a bit silent on Bahrain, even though the American ambassador has spoken out.

I think the United States has got to create a clear balance between national security and our democratic values, and it has to communicate such a balance to the American people and to peoples in the region clearly and unequivocally.

We should still pursue our own interests, but they do not necessarily equate with dictatorial repressive regimes. In the long run, democratically elected governments, no matter how messy, will be more stable than these autocratic regimes.