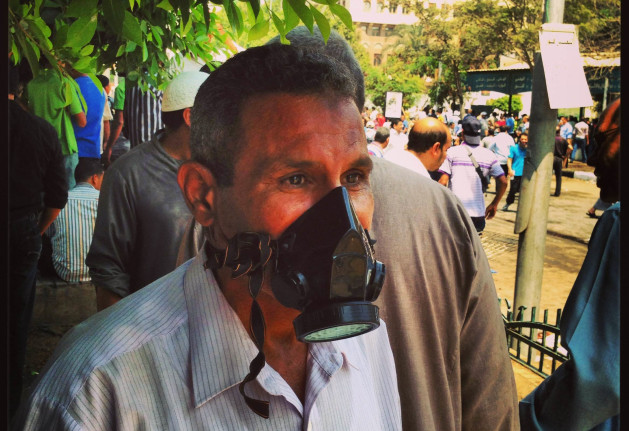 Saeed wears a gas mask outside a mosque in Cairo in anticipation of a police gas attack. Credit: Sam Kimball/IPS.

CAIRO, Aug 26 2013 (IPS) - With the sun inching closer to the horizon on Friday afternoon in the Mohandiseen neighbourhood of Cairo, the call to prayer from Mostafa Mahmood mosque goes out over a street empty of all but a few soldiers lingering beside their tanks.

Just last week the square and streets around Mostafa Mahmood were the sight of an impromptu sit-in by supporters of ousted president Mohamed Morsi and his Muslim Brotherhood organisation. The sit-in hastily formed after their violent eviction from two major camps at the hands of the Egyptian military that same day, which left at least 600 dead and thousands wounded.

Since then several hundred Muslim Brotherhood leaders around Egypt have been arrested on charges ranging from vandalism to inciting violence. Yet a call by the Brotherhood to take to the streets on the ‘Friday of martyrs’ (Aug. 23) to protest the military’s violence brought only scattered protests of a few hundred in Cairo and a few governorates.

Last week’s killings and the round-up of the Islamist organisation’s leadership since hasn’t wiped out the Brotherhood, but has dealt it a serious blow and left its political future uncertain.

Standing beside the battered and dusty fence of the Assad Bin Al Furat mosque in Cairo, frequently used as a gathering point for Muslim Brotherhood marches over the last several weeks, middle-aged truck driver Amr Faraghani Numeri and several older men paint a bleak picture of the Muslim Brotherhood in national affairs.

“Considering the 30 years of peaceful protest carried out under Mubarak, the Brotherhood will return to that - they have no other choice.”

“The future of the Ikhwan (Brotherhood) is over, done,” Numeri said. He was quick to add, “This doesn’t mean that Islam is over. The Muslim Brotherhood do not represent Muslims. They do not have a political or an organisational future because the people do not want them.”

Numeri and swaths of Egyptian society who share his views represent a new kind of challenge for the Muslim Brotherhood. According to Adel Abdel Ghafar, a scholar at the Centre for Arab & Islamic Studies at the Australian National University, “The Muslim Brotherhood is facing a grave trial. It is a period of serious adversity to be overcome.”

Never before in the Muslim Brotherhood’s 85-year history had it attained such public political influence, only to see it quickly snatched away, says Abdel Ghafar.

Isaam Shahid, a former member of the shura council in the Muslim Brotherhood’s Freedom and Justice Party (FJP), seemed unfazed at first by the hole the Brotherhood has found itself in. “Despite the unrest that has happened, I am optimistic that this situation will not continue for long,” he said self-assuredly.

Shahid said that the recent threats to ban the Muslim Brotherhood and send it right back to where it began before the 2011 revolution opened up space for them to participate above ground, were hollow: “There was talk by the legal scholars working to amend the constitution that was approved in 2012 that, based on a clause that prohibits the foundation of parties based on religious identities, the FJP would be banned. But this isn’t going to happen. The FJP is a party for all Egyptians.”

“I don’t think the military regime will now allow the Muslim Brotherhood in government,” he said.  But, he added, the organisation will continue to push to participate in public life. “Considering the 30 years of peaceful protest carried out under Mubarak, the Brotherhood will return to that – they have no other choice.”

Yet when pressed regarding the political future of the Muslim Brotherhood in the face of the military-backed government’s overpowering hostility, Shahid didn’t seem so optimistic.

“The forces of the coup have overtaken democracy and created ‘tankocracy’, so I doubt that they will allow The Freedom and Justice Party to participate in the coming elections,” he said. “They [the military-backed government] will soon hold elections that are on their face democratic but on the inside are full of cheating. But who talks about elections in this kind of situation anyway?”

Mohamed Elmasry, assistant professor of journalism and mass communication at the American University in Cairo, said that “The Brotherhood is a deep organisation, with hundreds of thousands of committed members. They have been part and parcel of Egyptian society for more than 80 years. If they are banned and forced underground, they will adjust.”

Giving a nod to much of the organisation’s history from after the Second World War until Mubarak’s overthrow, he added, “They have, after all, operated underground for most of their existence, and functioned as a religious and social service organisation.”

Because of their grassroots base, Elmasry thinks the game is not up for the Muslim Brotherhood. “I think they will fight to get back into politics, and, should Egypt’s political system once again offer the chance at free and fair political competition, I would not be surprised if the Brotherhood is able to achieve significant electoral success.”

“The Muslim Brotherhood will always be part of the political process,” Abdel Ghafar said. “However, the recent disappearance of the leadership will push the rest of the membership underground. The system has just closed up. Now they are waiting for the opportunity to re-enter.”