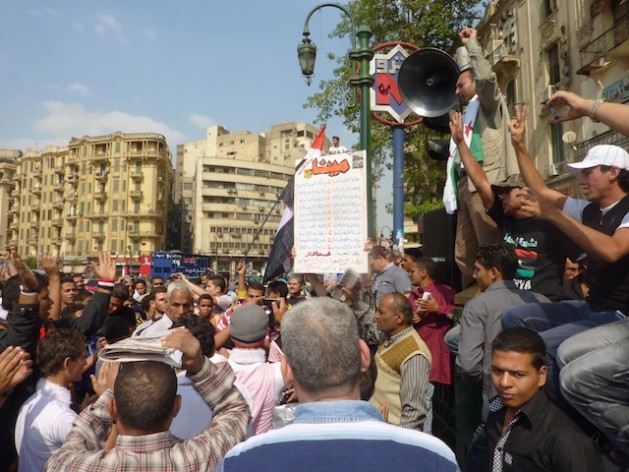 CAIRO, Sep 20 2012 (IPS) - Many of Egypt’s Coptic Christians met the recent assumption of the presidency by the Muslim Brotherhood’s Mohamed Morsi with trepidation, even panic – some even made plans to leave the country. Almost three month’s into Morsi’s term, these fears, say some experts, appear largely unfounded.

“Copts were mortified when Morsi won. It was as if the sky had fallen,” Youssef Sidhoum, editor-in-chief of Coptic weekly Al-Watan and expert in Coptic affairs, told IPS. “But such fears appear be to be overblown. Since assuming the presidency, Morsi hasn’t done anything – at least until now – to justify such alarmism.”

The largest concentration of Christians in the Middle East, Egypt’s Coptic community is thought to account for about ten percent of the country’s population, which currently stands at some 91 million. The rest of the Egyptian population is almost entirely Sunni Muslim.

In an effort to reach out to Egypt’s wary Christian minority, Morsi, shortly after assuming the presidency, met with representatives from all of Egypt’s churches. Speaking to Coptic, Catholic and Evangelical leaders, he stressed his intention to serve as a “president to all Egyptians” – in what has become a common refrain – regardless of religion or political orientation.

Such moves, however, have been greeted with scepticism on the part of some Copts, who question the new president’s sincerity.

“I don’t trust them,” Joseph, a 47-year-old Coptic resident of Cairo, said of the Brotherhood, preferring not to give his last name. “Morsi’s nice words to the Christian community are only cosmetic. We know that the Brotherhood wants to Islamise the country and Egyptian society.

Sidhoum, however, sees such attitudes as unnecessarily alarmist.

“We’ve now had a Muslim Brotherhood presidency for three months, and up until this point we’ve been given no reason to fear for our community’s well-being,” said Sidhoum. “We ought to give Morsi a chance; see what he does before drawing conclusions.”

In line with promises made before June’s presidential runoff (in which Morsi defeated Mubarak-era premier Ahmed Shafiq by a slim margin), Egypt’s first civilian president has not issued any decrees affecting Egyptian social norms, such as dress codes, alcohol sales, or so-called ‘morality’ policing.

Early this month, the presidency expressed its annoyance when the Netherlands formally began accepting applications for political asylum from Egyptian Coptic Christians based on claims of alleged ‘religious persecution’.

“It is not acceptable under any circumstances for any foreign parties to intervene in this matter (Muslim-Christian relations in Egypt),” presidential spokesman Yasser Ali declared at a press conference on Sep. 9. “This is an entirely Egyptian affair in which we will not accept any outside interference.”

The spokesman added: “The position of the presidency is clear on this issue – all Egyptians have the same rights and responsibilities vis-à-vis the state. The presidency does not draw any distinctions between Egyptians, Muslim or Christian.”

Yet despite these sentiments, many Coptic Christians point to the sporadic eruptions of sectarian violence that have followed last year’s revolution as proof of their worsening situation.

Last October, during Egypt’s military-administered ‘interim phase,’ dozens of unarmed protesters – most of them Christians – were killed during clashes with security forces in Cairo’s Maspero district. The incident sparked days of angry Coptic demonstrations, in which charges of state-sponsored religious persecution were frequently aired.

More recently, in early August, crowds of angry Muslims in the city of Dahshur south of Cairo destroyed several Coptic-owned shops and homes after a young Muslim man was killed by a Coptic neighbour in a personal quarrel. Calm was eventually restored, however, following the convention of a traditional ‘reconciliation council’ through which the damaged parties were satisfactorily compensated.

Facing the first such flare-up of his presidency, Morsi dismissed the episode’s “sectarian nature”, insisting that what had happened in Dahshur had been an “isolated incident” not reflective of Muslim-Christian relations in Egypt.

Sidhoum, for his part, is critical of the traditional mechanisms employed to defuse such sectarian explosions, which, under the Mubarak regime, had become an increasingly frequent phenomenon.

“Incidents like these always end with reconciliation councils and compensation for the Christian victims, but the perpetrators are never penalised,” he said.

Reconciliation councils are the traditional method by which local disputes between clans or families are resolved, especially in rural or desert regions. Family heads and community leaders – along with local clergymen if the dispute has a sectarian dimension – usually take part in such councils, through which a mutually acceptable agreement is negotiated, generally involving compensation to the more injured party.

Such councils are conducted outside the purview of the state, which, in such cases, has been historically inclined to let local tradition take its course.

But according to Sidhoum, this antiquated method of conflict resolution does little to deter such sectarian venting, since it allows the perpetrators of sectarian crimes to go unpunished.

“If the law were applied to whoever participated in sectarian aggression, be they Muslim or Christian, it would serve to re-establish the standing of the state and guarantee coexistence,” he said. “It would go a long way towards ending the phenomenon of sectarianism once and for all.”

“The Mubarak regime used to actively promote division between Muslims and Christians for its own political interests,” Thabet told IPS. “It allowed sectarian problems to persist by failing to execute the law and bring perpetrators to justice. Had it done so, such incidents would have been much less common.”

Both men also agree that the issue will ultimately depend on the country’s new constitution, currently being drafted by Egypt’s majority-Islamist Constituent Assembly.

“The problems traditionally faced by Egypt’s Christians will be resolved when there’s a constitution that ensures Egypt’s democratic and civil nature,” said Sidhoum. “Such a charter would lead to the passage of laws that don’t draw distinctions between citizens based on race or belief.”

“If the new constitution genuinely guarantees equality for all Egyptians, the political orientation of the president – Brotherhood, Salafist, or whatever – will become irrelevant,” Thabet concurred.

Egypt’s Constituent Assembly is expected to unveil a draft constitution within the next two months, after which the proposed charter will be put before a nationwide referendum for public approval.