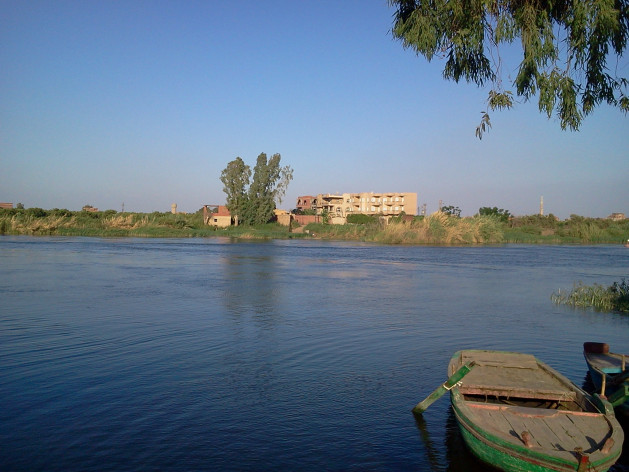 CAIRO, Jun 23 2013 (IPS) - Ethiopia’s diversion of part of the Blue Nile late last month has both rocked Cairo’s relations with Addis Ababa and provided fodder for Egypt’s ongoing war of attrition between its Islamist government and secular opposition.

“In Egypt’s current state of polarisation, the crisis is being exploited by both sides,” Ayman Shabaana of the Cairo-based Institute for Africa Studies told IPS. “Both government and opposition are using the critical issue of Nile security to bolster their popularity by beating war drums and making jingoistic statements.

“Meanwhile, no concrete steps are being taken to resolve the issue.”

Ethiopia began diverting the course of the Blue Nile, the primary source of Egypt’s Nile water, on May 28 in another step towards construction of its massive 4.2-billion dollar hydroelectric Grand Renaissance Dam project. When complete, the dam will be capable of producing 6,000 megawatts of electricity, making it Africa’s largest hydroelectric power plant.

"Morsi is simply using the Nile water crisis to combat his declining popularity and mounting public discontent with his administration."

Egypt, fearing the dam’s potentially adverse impact on its traditional share of Nile water, reacted to the move with indignation and outrage. Local headlines trumpeted the “imminent threat” posed by the dam to Egypt’s water security.

Egyptian President Mohamed Morsi, along with political figures from across the spectrum, rushed to express their readiness to defend the country’s access to Nile water.

Speaking before an all-Islamist audience at a Jun. 11 conference devoted specifically to the Ethiopia dam crisis, Morsi – who hails from Egypt’s Muslim Brotherhood – called for a diplomatic resolution, but warned that “all options” remained open in terms of a response.

“We are not calling for war, but we will never allow our water security…to come under threat,” he declared.

Morsi went on to call for “national reconciliation,” urging Egypt’s rival political camps – the ruling Islamists and secular opposition – to forget their differences in order to counter looming threats to the Nile.

Morsi’s appeal for national unity came shortly before planned mass demonstrations on Jun. 30 marking the end of his first year in office to demand that he step down to make way for snap presidential polls.

The planned protests are being spearheaded by Egypt’s Tamarod (‘Mutiny’) campaign, an anti-Morsi signature drive calling for a “withdrawal of confidence” from the president. While the group’s claims have not been independently verified, organisers say they have already collected 15 million citizens’ signatures in support of their demands.

The planned demonstrations, having been endorsed by almost all non-Islamist parties and political movements – including Egypt’s main opposition umbrella group, the National Salvation Front (NSF) – are expected to draw hundreds of thousands.

Anti-Morsi activists have been quick to accuse the presidency of exploiting the Ethiopia dam row to divert attention from its political failures and dilute popular enthusiasm for the upcoming protests.

“Morsi and his people are worried,” Tamarod campaign organiser Mohamed Abdel-Aziz told the state media in mid-June. “They fear the popular support for the campaign and our ability to mobilise on 30 June to bring down the president.”

Morsi, added Abdel-Aziz, “is simply using the Nile water crisis to combat his declining popularity and mounting public discontent with his administration.”

While Shabaana agreed that Morsi has tried to use the dam issue to drum up badly needed support, he also accused the opposition of exploiting the crisis to heap unfair criticism on the embattled presidency.

“The opposition, too, is taking advantage of the situation by simply attacking Morsi and the Muslim Brotherhood – who they hold responsible for the crisis – without offering any positive recommendations of their own,” Shabaana said.

He called on both sides to “cooperate on finding and implementing solutions rather than simply trading accusations and blame.”

Tarek Fahmi, political science professor at Cairo University, also said anti-Morsi political forces were using the crisis, which he described as a “national security issue”, to ratchet up pressure on the beleaguered presidency “without offering any constructive solutions.

“Instead of simply attacking Morsi’s perceived failures, the opposition could support popular diplomacy, civil society and Egyptian business interests in stepping up cooperation with Ethiopia,” Fahmi told IPS. “These are all positive steps that can be taken independent of the president or his administration.”

While Morsi and the Muslim Brotherhood remain under enormous political pressure, they are by no means isolated. On Friday (Jun. 21) hundreds of thousands of Morsi supporters staged rallies in Cairo’s Nasr City district to ‘Say No to Violence’ – which many fear will erupt on Jun. 30, and express support for the president’s “democratic legitimacy”.

Morsi narrowly defeated Ahmed Shafiq, ousted president Hosni Mubarak’s last prime minister, in Egypt’s first post-revolution presidential election a year ago. The polls, which were subject to judicial and international oversight, were widely regarded as having been free and transparent.

In a Saturday (Jun. 22) interview with the state press, Morsi reiterated his intention to complete his full term in office despite the upcoming rallies to demand his ouster.

“I will stay to ensure that power is handed over (in 2016 presidential elections) in line with the constitution and law…in keeping with democratic practice,” he said.

Meanwhile, Egypt, Sudan and Ethiopia are now reportedly hearing recommendations from a tripartite technical committee tasked with assessing the dam’s impact on downstream states. Nevertheless, many warn that the issue could – if not quickly addressed on a political level – have serious long-term implications for Egypt’s water security.

“Ethiopia’s move was unprecedented. Never before has an upstream state unilaterally built a dam without downstream approval,” said Shabaana. “If other upstream countries follow suit, Egypt will have a serious water emergency on its hands.”

He added: “And Egypt’s reaction to the crisis so far has been marked by confusion, hysteria and infighting – all of which hardly inspire confidence.”