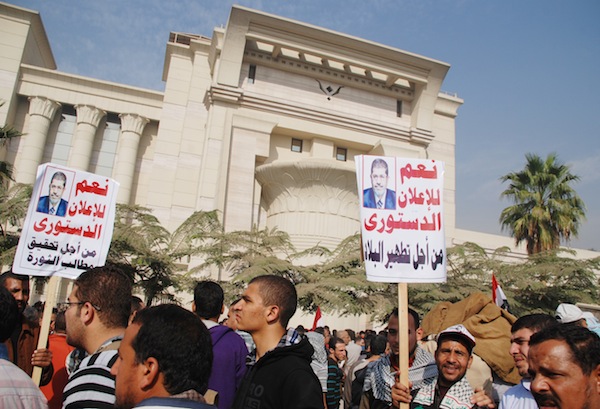 The most contentious article of the draft judicial authority law being debated by the Shura Council (the upper house of Egypt’s parliament, currently endowed with legislative powers) is one reducing the official retirement age for judges from 70 years to 60.

If passed, the law, tabled by the moderate-Islamist Wasat Party and endorsed by the Muslim Brotherhood, would effectively force thousands of Egyptian judges into retirement.

Opponents of the draft, which include the majority of judges and much of Egypt’s secular opposition, decry the legislation as a naked power grab by the Brotherhood – the group from which Morsi hails – aimed at stocking Egyptian courts with elements loyal to the group.

Prominent leftist opposition figure Hamdeen Sabbahi, who lost to Morsi in Egypt’s first-ever free presidential election almost one year ago, recently declared that the law’s passage would lead to a “massacre” of the nation’s judges.

“There is a clear intention by the Muslim Brotherhood to dominate Egypt’s judicial institutions, thus making it almost impossible to provide judicial oversight of future elections,” Sabbahi said last month while taking part in a protest outside the Shura Council’s Cairo headquarters.

"There is a clear intention by the Muslim Brotherhood to dominate Egypt's judicial institutions."
-- Hamdeen Sabbahi

He asserted that parliament’s upper house, which holds legislative power until the election of a new lower house (the date for which remains in legal limbo), “does not have the right to legislate since it was elected by only seven percent of the voting public”.

“This draft legislation, which would effectively see the forced retirement of some 8,000 serving judges, constitutes an attempt by the Brotherhood and its allies to take over the judiciary,” Nassar told IPS.

He claimed that the Brotherhood intended “to appoint their own judges so they will be able to rig upcoming parliamentary elections in their favour”.

Meanwhile, supporters of the draft legislation – including the presidency, the Muslim Brotherhood and the latter’s Freedom and Justice Party (FJP) – strenuously deny the allegations, saying the law simply aims to purge the judiciary of elements loyal to the ousted Mubarak regime.

Walid Shirabi, spokesmen for the “Judges for Egypt” movement (comprised of judges and judicial officials who support the Brotherhood and the presidency), described the opposition’s claims that the law had been tailored to fill judicial institutions with pro-Brotherhood judges as “illogical”.

“According to the constitution, Egypt’s Supreme Judicial Council (SJC) is responsible for the appointment of judges [who must then be approved by the president],” Shirabi told IPS. “And the SJC does not contain a single Muslim Brotherhood member.”

Shirabi refuted claims that the abrupt retirement of thousands of judges would adversely affect the functioning of Egypt’s judiciary, already bogged down with literally millions of outstanding legal cases across the country’s expansive court system.

“Rather, it will expedite the judiciary’s work by seeing the appointment of fresh cadres of judges,” he said.

“Egypt’s recently-approved constitution gives the Shura Council the right to legislate until the election of a new lower house,” he said. “Any assertions otherwise are aimed at maintaining the corruption of the Mubarak regime, which raised the judges’ retirement age from 60 to 70 with the express purpose of keeping pro-regime judges in service.”

The following day, Egypt’s then-ruling Supreme Military Council ordered the dissolution of the newly-elected People’s Assembly (parliament’s lower house), half the seats of which had been won by the Brotherhood’s FJP while another quarter had gone to other Islamist parties.

Although many of the Brotherhood’s political rivals had applauded the dissolution of the Islamist-dominated parliament, legal experts questioned the legitimacy of the HCC ruling on which the move had been based.

“Only one third of the seats in parliament – those reserved for independents – were constitutionally questionable,” Atef al-Banna, constitutional law professor at Cairo University, told IPS at the time. “But the HCC failed to provide a legal rationale for its call to dissolve the entire assembly.”

Speaking in April, Pakinam al-Sharqawi, Morsi’s aide for political affairs, charged the judiciary with unfairly interfering in Egyptian domestic politics “since the dissolution of the People’s Assembly last year” – a move she described as “dangerous and unprecedented”.

“Never before has a court been allowed to effectively dissolve a sitting parliament that had been democratically elected by 30 million citizens,” she asserted.

The past year has seen several more clashes in the on-going confrontation between judiciary and presidency, including an unsuccessful attempt by the latter to reinstate the dissolved People’s Assembly, a successful attempt to appoint a new prosecutor-general, and an executive decree temporarily shielding presidential decisions from judicial oversight.

In the meantime, Shirabi contends, a number of leading judicial officials have “continued to interfere in other branches of government by overturning executive orders, working for the dissolution of democratically elected bodies, and otherwise hindering the functioning of the state”.

As it now stands, the Brotherhood’s FJP, which enjoys a considerable majority in the Shura Council, appears intent on seeing the draft law passed, while spokesmen for the judiciary demand that any debate of the bill be postponed until the election of a new lower house.

Last week, to the fury of many judges and opposition figures, the FJP-led Shura Council referred the draft law to its legislative affairs committee for discussion. It remains unclear, however, when – or if – the council will put it to a vote.

Meanwhile, the Egyptian Judges Club, an unofficial association of judicial officials known for their antipathy towards Morsi, has threatened to suspend all courtroom activity nationwide in the event that the bill becomes law.