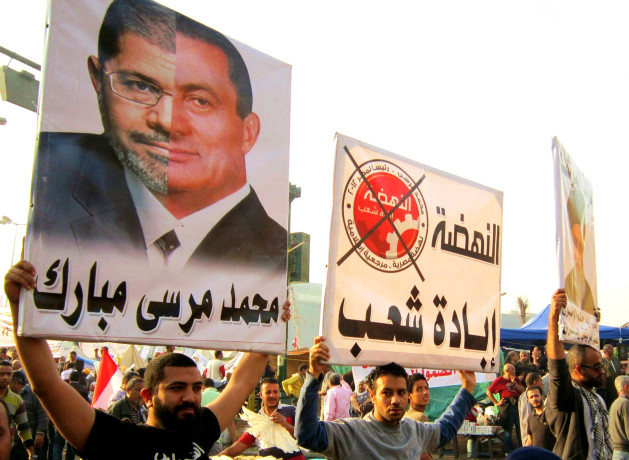 Like Mubarak, like Morsi: the majority of Egyptians disapprove of President Morsi's performance, a new poll shows. Credit: Cam McGrath/IPS.

CAIRO, Jun 21 2013 (IPS) - Egyptians are deeply divided and the majority are dissatisfied with the performance of Islamist President Mohamed Morsi, but also have little confidence in the main opposition figures or their future, a new poll has found.

Washington-based Zogby Research Services surveyed over 5,000 adult Egyptians in April and May to assess the public’s confidence in state institutions, satisfaction with Morsi’s government, and hopes for the future. Pollsters sought a representative cross-section of Egyptian society, but did not ask respondents about their political affiliation or voting intention.

“What our findings reveal is a deeply divided society fractured not along demographic lines, but on the basis of ideology and religion,” the survey team reported.

They noted that the country’s two main Islamic parties – the Muslim Brotherhood’s Freedom and Justice Party (FJP) and the ultra-conservative Nour Party – appeared to have the support of nearly 30 percent of those polled.

Major opposition groups, including the National Salvation Front (NSF) and the April 6 Youth Movement, collectively had the support of about 35 percent of respondents. Almost 40 percent of those surveyed were categorised as a “disaffected plurality,” appearing to have no confidence in either the government or any political opposition party.

“These three groups define the deep divide that manifests itself of most issues,” the survey team said.

More than 90 percent of those who identified with Islamic parties claimed they are better off today than they were five years ago, while over 80 percent of those associated with opposition movements and the “disaffected plurality” said they are worse off.

Minority Christians, who make up about 10 percent of Egypt’s population, were three times less likely than Muslims to view their situation as improved, with 81 percent saying they felt worse off now. Nine in ten are convinced the ruling Muslim Brotherhood is attempting to “Islamise” the state.

The new poll reveals a marked decline in the optimism of 2011, when Egyptians buoyed by the overthrow of Mubarak’s autocratic regime expressed unprecedented confidence in their future. Overall just 46 percent of those surveyed – mainly those who identified with Islamic parties – said they expected their situation to improve in the next five years.

The survey team said the numbers “demonstrate a precipitous decline in optimism,” which had reached a high of 85 percent in June 2011 after the change of government.

Two-and-a-half years since Mubarak was toppled, and a year since President Morsi was sworn into office on a razor-thin margin, Egypt is facing a “crisis in leadership,” they noted.

A year ago, 57 percent of Egyptians surveyed said Morsi’s victory was either “a positive development” or “the result of a democratic election and the results need to be respected.” Today, that support has dropped to just 28 percent – almost all of it coming from his own party.

The poll shows Morsi’s street credibility is just four points above Mubarak’s, and indicates that the overwhelming majority of Egyptians are dissatisfied with the president’s policies and performance. Only about a quarter of those polled, mainly supporters of Islamic parties, indicated they were “satisfied” with the Morsi government’s performance on the economy, security, welfare and human rights.

The level of discontent is worrying. Disparate opposition groups are calling for mass protests on Jun. 30, the first anniversary of Morsi taking office. Observers fear that the demonstrations could enflame the country’s deeply polarised politics and lead to further unrest and violence.

When asked about alternatives to Morsi’s rule, however, respondents showed little confidence in the country’s main opposition leaders, including former presidential candidates. The only living public figure deemed credible by more than a third of respondents was Bassem Youssef, a TV satirist recently charged with insulting the president.

Egyptians showed universal confidence in the army, which scored about a 94 percent confidence level across every demographic group. About 60 percent of those who associated with opposition movements or the “disaffected plurality” said they favoured a temporary return to military rule, while almost all Islamists opposed it.

The gap was even greater in response to a question about whether the constitution, which was forged by an Islamist-dominated panel and passed in a controversial referendum, should be scrapped. The majority of Egyptians favour the idea, while 93 percent of respondents who identify with the ruling FJP oppose it.

The poll found that the only proposed solution to Egypt’s problems with overwhelming approval from all was a “real national dialogue.”