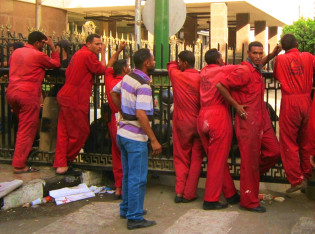 By Cam McGrath
When Mohamed Mursi was sworn in as president in June there were concerns that the first democratically elected president in Egyptian history would be subservient to the military council that had ruled the country since dictator Hosni Mubarak was toppled in early 2011.

By Cam McGrath
Ahmed Hassanein works in a modern factory in an industrial enclave west of Cairo. He wears a neatly pressed uniform and operates precision calibrated machinery on a line that produces components for foreign-brand passenger vehicles.

By Cam McGrath
During the uprising that ended Hosni Mubarak’s 29-year rule, Egyptian protesters stormed state security headquarters in Cairo. Inside they discovered a trove of documents – including surveillance reports on activists, transcripts of telephone conversations, and intercepted emails – that revealed the meticulous records the state kept on the activities of its citizens.

By Cam McGrath
The independent trade unions that have sprung up across Egypt over the last 17 months face an uncertain future, caught between Islamists and the military and operating under labour laws that have not changed since Hosni Mubarak was in power.

By Mel Frykberg
If the life sentences for former Egyptian president Hosni Mubarak and one of his key allies were meant to placate Egyptians, they have had the opposite effect.
ADVERTISEMENT ADVERTISEMENT