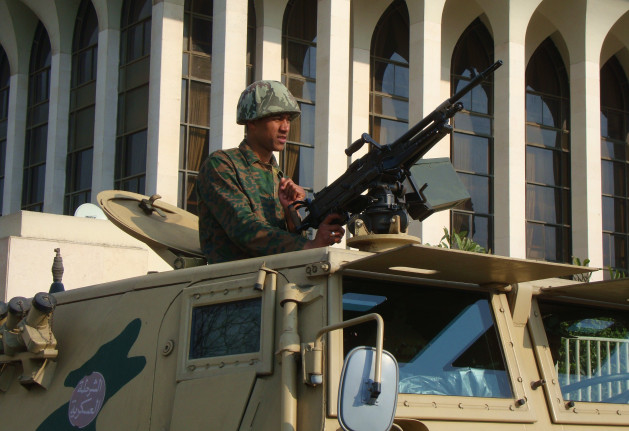 CAIRO, Aug 22 2013 (IPS) - Egyptian military leader General Abdel-Fattah El-Sisi said ousting the country’s first elected president was necessary “to preserve democracy” and resolve the political deadlock that had dangerously polarised the country. But six weeks after the coup he led, the notion that toppling Islamist president Mohamed Morsi would restore stability to Egypt has proven false.

Instead, the confrontations between the army and supporters of the ousted president have led to violent chaos and given the military a free hand to restrict freedoms and rebuild the apparatus of Hosni Mubarak’s authoritarian regime. A court ordered the release of Mubarak himself on bail.

“The biggest threat facing Egypt remains the return of the police state. More specifically, the threat concerns not only the reconstitution of a police state, which never really left since Hosni Mubarak’s ouster, but also the return of the implicit, if not overt, acceptance of the repressive practices of the coercive apparatus,” said political analyst Wael Eskander writing in the independent Jadaliyya ezine.

At least 1,000 Egyptians have been killed and thousands injured since the army stormed pro-Morsi demonstrations in Cairo on Aug. 14 using live ammunition. Another 160 protesters, mostly members of the Muslim Brotherhood that forms the core of Morsi’s support, were killed in clashes with security forces in July.

“A Muslim Brotherhood driven underground, a leading military figure, an assertive police force, and submissive liberal bloc is perhaps the most apt description of pre-2011 Egypt.”

The post-coup casualty figure has exceeded that of the 18-day uprising that toppled former president Mubarak in 2011. By all accounts, the military operation to clear public squares of largely peaceful and unarmed protesters calling for Morsi’s reinstatement has been far more brutal.

Rights group Amnesty International described the crackdown as “utter carnage”, blasting Egypt’s military-backed government for its excessive use of force.

The level of violence is shocking but not surprising, says rights lawyer Negad El-Borai, who recalls the heavy-handed tactics the military used to intimidate opposition activists during the 17 months it ruled Egypt between Mubarak’s fall and Morsi’s election.

“The last time the army was in power anyone who spoke out against them was beaten, humiliated or killed,” El-Borai told IPS. “That’s just how these guys operate.”

Despite the military’s poor track record in domestic politics, many liberal and leftist Egyptians supported the army’s Jul. 3 coup, seeing military intervention as preferable to rule under the Muslim Brotherhood. Their virulent anti-Brotherhood sentiment in effect provided a mandate to remove Morsi and use force against the Islamic group’s members.

It has also “distracted them” from the striking return to the days before the 2011 uprising, say analysts.

Having ousted Morsi and suspended Egypt’s flimsy constitution, the military has used the façade of a civilian interim government to rebuild the institutions that propped up Mubarak’s corrupt and repressive regime.

The old guard is slipping back into place. Egypt’s cabinet has been stripped of Islamists and stacked with Mubarak-era figures, including former ranking members of Mubarak’s now-dissolved National Democratic Party. More than half of the 18 provincial governors appointed last week are former army or police generals – some with chequered records of conduct during the 2011 revolution.

The “militarisation of the state,” as one opposition party spokesman described it, has been carried out under the cover of a pernicious propaganda campaign aimed at vilifying Morsi’s supporters. The ruling junta and its media allies have whipped up hysteria against the Brotherhood, painting the group’s members as paid dupes and terrorists using the sort of patriotic rhetoric typically reserved for arch-enemy Israel.

Eskander argues that a “war on terror” is the perfect legitimising tool for a government without democratic credentials that is seeking to violently suppress its political opponents. The terrorism threat has allowed Egypt’s security services to regain “their traditional role as an arbiter of these conflicts, as well as their licence to employ abusive, repressive tactics.”

Since Morsi’s ouster, authorities have rounded up hundreds of Brotherhood leaders and supporters on charges of inciting violence and terrorism. The government has also hinted that it would ban the 85-year-old Islamic group – a move that could drive it underground, where it spent most of the past 60 years.

Security solutions “will only reinforce the Brotherhood’s rigidity… [and] further empower the coercive apparatus,” warns Eskander. “As extremist groups are pushed into hiding, the security leaders will find excuses to employ intrusive surveillance measures, interrogate, torture, and abuse, all with zero transparency and accountability.”

There are signs this is already happening. In short order, Egyptian security officials have restored Mubarak-era emergency laws, imposed a curfew, and issued a standing order to use live ammunition.

The interior ministry has also formally reinstated a number of state security departments dismantled following the country’s 2011 uprising. Among these are the notorious police units that were responsible for the investigation, forced disappearance and torture of thousands of Islamists and political dissidents during Mubarak’s rule.

“If this picture sounds familiar, it is,” he wrote. “A Muslim Brotherhood driven underground, a leading military figure, an assertive police force, and submissive liberal bloc is perhaps the most apt description of pre-2011 Egypt.”