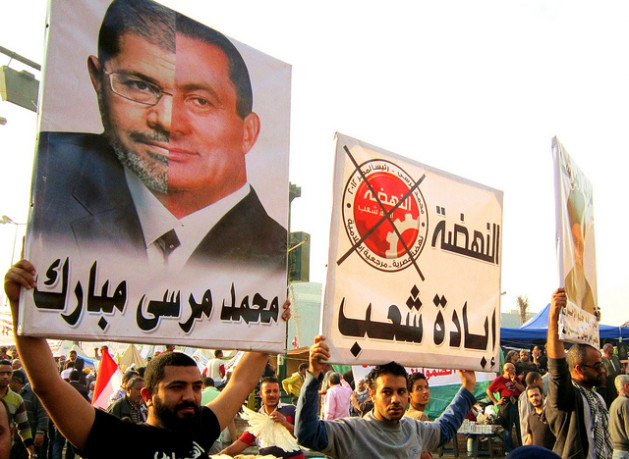 Like Mubarak, like Morsi: the majority of Egyptians disapprove of President Morsi's performance, a new poll shows. Credit: Cam McGrath/IPS

Speaking at a press conference in Tanzania Monday, Obama appealed for all parties to “remain peaceful” and “show restraint” – messages that were echoed repeatedly by U.S. officials during the day, particularly after the Egyptian military issued a threat that it was prepared to intervene Wednesday if no settlement emerged by then.

"I don’t think the Americans have been on the side of the Muslim Brotherhood or the military; whoever can consolidate rule is who they will back." -- Joshua Stacher of Kent State University

“(W)e’re going to continue to work with all parties inside of Egypt to try to channel this through legal, legitimate processes,” Obama said during a joint appearance with Tanzania’s president, Jakay Kikwete.

“But I do think that if the situation is going to resolve itself for the benefit of Egypt over the long term, then all the parties there have to step back from maximalist positions,” he noted. “Democracies don’t work when everybody says it’s the other person’s fault, and I want 100 percent of what I want.”

The speed with which events have taken place appears to surprised officials here. They include the turnout of millions of people in the anti-government protests that took place Sunday across Egypt and the military’s thinly veiled threat Monday to “announce a road map for the future and the steps overseeing its implementation…” in 48 hours if Morsi failed “to meet the demands of the people”.

And while the administration appealed for compromise, it was careful to avoid taking sides at a critical moment in the fate of the Arab world’s most populous and potentially influential nation, according to a number of independent analysts.

“The U.S. needs to avoid any appearance of interfering in Egypt’s domestic politics right now,” said Thomas Caruthers, a democracy expert at the Carnegie Endowment for International Peace (CEIP) here. “The opposition, in particular, has been frustrated with the U.S. for months, feeling it’s on the side of the Muslim Brotherhood.”

His assessment was echoed by Paul Pillar, a CIA veteran who served as the National Intelligence Officer for the Near East from 2000 to 2005. “Any U.S. actions that could be perceived as interference in Egyptian politics would only result in antagonising one or another element in Egypt,” he told IPS in email exchange.

“The United States should be prepared to work together, in the interest of good Egyptian-U.S. relations, with whoever is in charge in Cairo whenever the dust settles,” he added.

Thus far, however, it seemed as if Obama’s efforts to appear neutral while appealing for compromise have not borne fruit. Both Morsi and the Brotherhood issued defiant statements Monday, although the president, who was elected one year ago in what were regarded as Egypt’s first free and fair elections, reportedly met with key generals late Monday.

“I think there will be a lot anxiety here about how the next 48 hours unfold,” said Stephen McInerney, the head of the Project on Middle East Democracy (POMED). “People in the administration are very much hoping a coup can be avoided, and I would expect them to be encouraging Morsi to take the steps necessary to avoid one.”

“There could be very serious consequences if there is a military coup since it would be against an elected government, and there’s language in the (foreign aid) bill that bans the provision of assistance – military or economic – to (regimes) in which the military is used to overthrow elected governments,” he told IPS.

“It wouldn’t be surprising if (a coup) led to large-scale civil violence in Egypt,” McInerney added. “You could even see something like Algeria in the 1990s. The fact that things are happening so quickly limits a lot of options for the administration and may deny it from having the kind of influence it would like.”

Faced with the military’s threat, analysts here said it appeared that Morsi and the Brotherhood faced several choices: to resign or call early elections; negotiate a power-sharing agreement with the mainly secular opposition, specifically the National Salvation Front (NSF), which has been led by the former head of the International Atomic Energy Agency (IAEA) and former Arab League Secretary-General Amr Moussa; or forcing a showdown – and the attendant risks of violence – with both the military and opposition forces.

But events have been moving so quickly, according to Caruthers, it’s not clear that negotiating an accord with the NSF would be sufficient to calm the situation. “His best bet is to reach out to those people in the (NSF) and try to strike a deal with them, but I don’t know whether they can deliver the street.”

The massive demonstrations on Sunday were organised by Tamarod, a grassroots, civil-society movement of which the NSF was only one – albeit important – part. On Monday, Tamarod issued its own ultimatum calling on Morsi to resign by Tuesday afternoon or face a campaign of “complete civil disobedience”.

Monday’s coup threat by the military has effectively “terminated” Morsi’s presidency, according to Joshua Stacher, an Egypt expert at Kent State University in Ohio. He told IPS that ultimately Washington will choose “whatever political force can exercise authority in the country, maintain the state, and keep U.S. security interests afloat in the region.

“If it’s the military, so be it; if it’s an elected government, so be it – they don’t distinguish. I don’t think the Americans have been on the side of the Muslim Brotherhood or the military; whoever can consolidate rule is who they will back.

“At this point, [Washington’s] motives and ambitions are far too suspect by the population, so distance is probably the best course of action,” he said.

“If anything, they should call for the military to stay out of any transition and ensure that it would be civilian-led,” he told IPS. “Their main interest is calming the popular mobilisation and getting people off the streets. And they prefer the process to be electionised, because the more elections, the better the chances of neutralising popular mobilisation.”

Robert Springborg, an Egypt specialist at the U.S. Naval Postgraduate School, partially agreed with that analysis.

He complained that what Washington has done since the arrival of the “Arab Spring” was to show, through U.S. backing for both the military and then the Muslim Brotherhood and its failure to support the secularist opposition, that “we are more interested in American security concerns than in democracy in Egypt.”

That policy, he told IPS, has “now run up against the disenchanted Egypt where very significant numbers of people don’t want the Muslim Brotherhood in power.

“We entered the political balance putting our weight on the side of the military and the Brotherhood; we should now remove our weight from that balance and have an outcome that has all three political forces reach an agreement in which the interests of all three are protected through democracy, …and none of the three would be able to dominate the political system.”