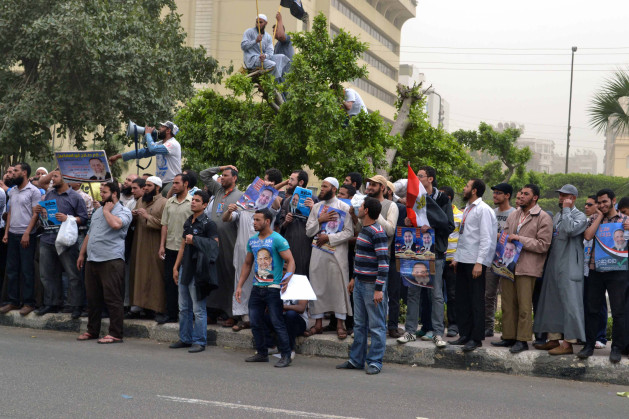 CAIRO, Jun 30 2013 (IPS) - Egyptian President Mohammed Morsi faces massive demonstrations, but he faces also his own government on many fronts.

Morsi seems to have run into one confrontation after another with the judiciary. This has emerged as one of the most prominent public indications that the new government in Egypt is weak on governance.

Under pressure from his supporters he tried at first to avoid taking the constitutional oath before the Supreme Court. He failed in that attempt, and managed to alienate both his supporters and the judiciary.

Later, Egypt‘s highest court – whose judges were appointed by former president Hosni Mubarak – dissolved the Islamist-dominated parliament and ruled that the army-backed candidate Ahmad Shafiq could contest the presidential election, in what was widely seen as a double blow for the Muslim Brotherhood.

Morsi passed a decree later that prohibited any authority from revoking presidential decisions, and granted himself extensive powers allegedly to protect the revolution. Judges called for a nationwide strike against him.

Morsi decided to dismiss the prosecutor general – against the Egyptian constitution that fortifies this position from impeachment. Supporters of the president and the Muslim Brotherhood blockaded the Supreme Constitutional Court where judges had been due to discuss the legality of the decree. The court went on indefinite strike in protest over such “pressure”.

Abdullah Fathy from the judges union, a powerful but unofficial body that represents judges across the country, told IPS that Morsi and his group have been mismanaging a number of state institutions, and failed to understand the nature of their work, and of the judiciary particularly. Morsi’s men pretended that corruption had seeped into all institutions of the former regime; disregarding the fact that the judiciary remains an independent authority regardless of successive regimes, Fathy said.

Morsi has also been battling the armed forces. The killing of 16 soldiers on the Israeli border a year ago resulted in the dismissal of Field Marshal Mohamed Husshien Tantawi, the head of Egypt’s Higher Military Council and Lieutenant General Samy Anan, Chief of Staff of the Egyptian Armed Forces. The humiliating dismissal aroused the anger of officers and soldiers.

The strongly Islamist Hamas which rules Gaza was implicated in the crime. The President vowed to take revenge and reveal the identity of the criminals. A year later now, no action has been taken.

On May 16 this year, four port security officers, two state security officers and a soldier were kidnapped in Sinai. The president preferred not to launch a military operation against the kidnappers, which would have cost him the sympathy of hardline Islamist supporters, analysts say.

Last week Dr. Mohamed al-Beltagy of the Freedom and Justice Party (FJP), the political wing of the Muslim Brotherhood, described the Egyptian army as “the socialists who lost the 1967 war and Sinai.” The silence of the president over such insults aroused another wave of anger within the army.

“The Muslim Brotherhood are working on taking control over many institutions of the state to fulfill their thirst of power, pretending to have a plan, while they do not,” Alaa Abdel Moneim, member of The National Salvation Front, an alliance of 34 Egyptian political parties formed to defeat President Mohammed Morsi‘s  constitutional declaration, and a former member of the dissolved parliament told IPS. “They did not study the consequences of their actions and so this has led to public anger and heated calls for demonstrations on Jun 30.”

Abdel Moneim is confident of the people’s victory in the end. The planned demonstrations, he said, are a civil movement that has been organised outside of the realm of political parties.

To add to the judiciary and the armed forces, a third enemy Morsi is fighting is the national intelligence, leaders from his party say. Abu Al-Ela Mady, the head of the Al-Wast party, alleged last March that Morsi told him that the Egyptian intelligence controls about 300,000 thugs working against him (Morsi).

A fourth front facing Morsi is the independent media. Morsi has alleged that the independent media get funds from foreign countries to work against the security of the state. On Mar. 24, his Islamist allies seized the national production city for more than a month, preventing media teams from getting to work. Morsi refused to condemn such actions.

In his speech earlier this week to mark a year of his presidency, he attacked the media and the owners of independent media platforms. He said they will face imprisonment if they do not stop criticising him. The president is fighting a lot of his own people.