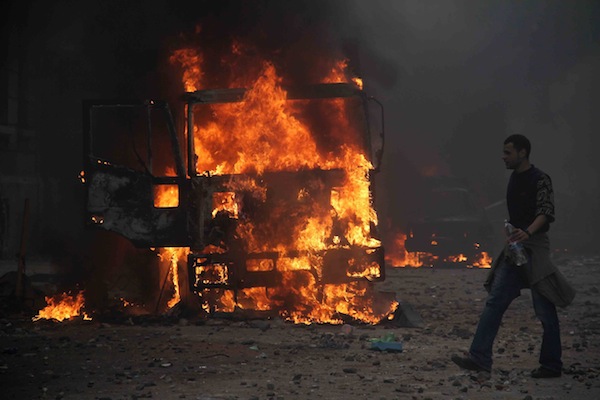 The aftermath of clashes between police and anti-coup demonstrators during the dispersal of the Rabaa Al-Adaweya sit-in on Aug. 14 in Cairo. Credit: Amro Diab/IPS

WASHINGTON, Oct 10 2013 (IPS) - The administration of President Barack Obama announced Wednesday it was freezing hundreds of millions of dollars in aid to the Egyptian military pending “credible progress” toward a return to democratic rule.

The State Department said Washington was suspending deliveries of big-ticket weaponry, including tanks, warplanes and attack helicopters, that make up much of the 1.3 billion dollars in military aid it provides Egypt annually.

Officials also said Washington would not provide the Egyptian government with 260 million dollars in cash to use as it sees fit, as it has in the past. Instead, it plans to work with the military-backed regime to bolster programmes in health, education, democracy promotion and private-sector development.

"The military isn't going to change their fundamental strategy over a few tanks and planes."
-- Robert Springborg

But officials who briefed reporters after the announcement insisted that the administration had still not determined whether the Jul. 3 ouster of President Mohammed Morsi constituted a “coup”, which under U.S. law would require the complete cutting of military assistance. They stressed that the latest steps were not intended to be “punitive” or to diminish “Egypt’s ability to be a strong security partner of the United States.”

One official characterised the telephone conversation in which Pentagon chief Chuck Hagel informed the regime’s strongman, Defence Minister Gen. Abdel-Fattah al-Sisi, of the freeze as “very friendly” and said that the fact that the two men had spoken 20 times over the last several months “underscores the importance of the U.S.-Egypt relationship.”

The State Department said Washington would continue to provide military training in the United States for Egyptian officers and spare parts for major weapons systems already in Cairo’s possession.

In what some critics called a major loophole, the State Department said the United States will also continue providing aid used for border security and counter-terrorism and for “ensur[ing] security in the Sinai,” the scene of growing anti-government violence since the July coup.

Too little, too late

Most Egypt experts here welcomed the State Department’s Wednesday announcement but complained that it may be a case of “too little too late.”

Al-Sisi appeared unaffected by the cuts and, in fact, emboldened by 12 billion dollars in aid from Saudi Arabia, the United Arab Emirates and Kuwait, as well as a pledge by Saudi King Abdullah to compensate for aid withheld by Washington. By most accounts, the regime’s repression, including arrests of virtually all of the Brotherhood’s national leaders and thousands of its members, has intensified.

On Wednesday, hours before the State Department announcement, the regime officially dissolved the Brotherhood, while the Court of Appeals in Cairo announced that Morsi, Egypt’s first democratically elected president, will be tried on Nov. 4 on charges of inciting violence.

“This sort of step should have been taken more forthrightly earlier on,” Emile Nakhleh, a former director of the CIA’s Political Islam Strategic Analysis office, told IPS in reference to the military cuts. “This is better than nothing at all, but we haven’t really conveyed a clear message.”

Khaled Elgindy, an Egypt expert at the Brookings Institution, complained that Wednesday’s announcement was “sort of a half-measure that doesn’t appear to be part of a broader, overarching American vision for Egypt, or the region.”

“It’s very important to send a message when it comes to democratic and human rights standards, but I don’t think we’ve done that effectively,” he told IPS. “We’ve done it in a way that muddles that message and that makes it possible for any side in Egypt to characterise it in whatever way they want.”

Robert Springborg, an Egypt specialist at the Naval Post-Graduate School, said Wednesday’s announcement should be seen more as a “political and symbolic” gesture than one “where the capacities of the Egyptian military will be really impacted.”

“The military isn’t going to change their fundamental strategy over a few tanks and planes,” he said in a phone interview. “This will have zero impact on what the military and the government do over the next few months.”

“It’s certainly the right thing to do, but it’s overdue,” said Samer Shehata of the University of Oklahoma, who stressed that the administration should have called Morsi’s ouster a coup and suspended military aid from the outset.

“Of course, when you withdraw aid, there’s always a question of whether you give up influence,” Shehata said. “I don’t know the answer, but I do know that the U.S. should not be giving military aid to this regime right now.”

“The problem is that the kind of assets we provide for border security and counter-terrorism can be readily put to use in suppressing the opposition in Egypt,” noted Wayne White, a former deputy director of the State Department’s Middle East intelligence office who is currently based at the Middle East Institute.

“The F-16s and tanks [now suspended] are not relevant to the ongoing repression, so this may not do anything to reduce it,” he told IPS.

Some lawmakers close with the Israeli lobby, which has strongly opposed cuts in military aid to Egypt out of fear they could diminish the Egyptian army’s commitment to uphold the 1979 Camp David peace accords with Israel, urged the administration to reconsider.

“I am disappointed that the Administration is planning to partially suspend military aid to Egypt,” said Eliot Engel, ranking Democrat on the House Foreign Affairs Committee, in a statement issued before the actual announcement. “During this fragile period we should be rebuilding partnerships in Egypt that enhance our bilateral relationship, not undermining them.”

After Morsi’s ouster, the administration urged the new regime to include the Brotherhood in the process to return the country to democratic rule. When those appeals were ignored, it quietly suspended delivery of some F-16s and cancelled the annual “Bright Star” joint manoeuvres that U.S. forces have carried out with Egyptian counterparts for decades.

Obama’s decision to reduce aid followed a review launched in August after several massacres in which more than 1,000 Brotherhood protestors were killed. The president decided to act after violent clashes between Morsi supporters, security forces and anti-Brotherhood mobs killed more than 50 people last weekend, according to officials.