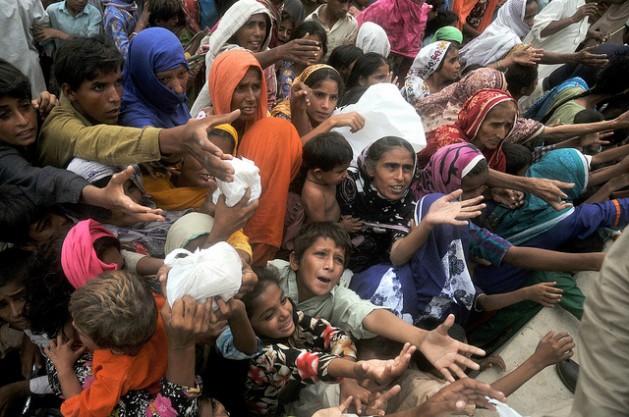 People at Labor Square in Gulshan-e-Maymar, Karachi, Pakistan wait for food aid after the 2010 floods. Forced migration and the displacement of vulnerable communities are issues of concern to U.S. national security experts. Credit: M Fahim Siddiqi/IPS

WASHINGTON, Feb 27 2013 (IPS) - More than three dozen national security officials, members of Congress and military leaders are warning of the threat climate change poses to U.S. national security, the latest in an indicator that U.S. intelligence and national security circles are increasingly worried about a warming planet.

In a new bipartisan open letter, they stress the need for urgent action and call on both public and private support to address issues that included forced migration and the displacement of vulnerable communities, as well as the dangers related to food production during extreme weather events.

“We tried to accomplish two things: First, to make a call to action on the whole issue of climate change,” Lee Hamilton, a former member of Congress and a founder of the Partnership for a Secure America (PSA), a bipartisan Washington group that organised the letter, told IPS.

“Many people are frustrated that the political system doesn’t seem to be able to deal with question of climate change. It’s not on the agenda – the president has mentioned it, politicians have mentioned it, but we really have no action taking place.”

Hamilton continued, “The second thing we did was put it in a national security context, which I think was a unique way to frame it, and hopefully it will provide an additional stimulus for action.”

They join the State Department, Defence Department, National Intelligence Council and a growing number of other security voices here in emphasising the national security implications of climate change.

“Even if you’re sceptical about any single part of climate change, it’s hard to get away from the … combination of feedback loops together with population growth and increasing consumption, which lead to a number of national security concerns,” Woolsey said here Tuesday, referring to “millions upon millions of hungry, thirsty neighbours to the south [of the United States], looking for somewhere to go.”

Unless precautionary steps are taken, the letter warns that “climate change impacts abroad could spur mass migrations, influence civil conflict and ultimately lead to a more unpredictable world.” And “protecting U.S. interests under these conditions would progressively exhaust American military, diplomatic and development resources as we struggle to meet growing demands for emergency international engagement.”

The new letter also comes against the backdrop of unfulfilled promises of action from the White House and a highly polarised Congress on the issue.

The national security aspect of climate change for the United States was given high prominence in December, when a major report from the National Intelligence Council (NIC), a high-level body coordinating all of the country’s intelligence agencies, listed climate change as one of four “megatrends” that will shape the world over the next two decades.

Other megatrends included factors relating to greater empowerment and prosperity of the individual, the growing political and economic power of developing countries, and dramatic changes in demographic patterns like rapid urbanisation.

The “Global Trends” report emphasised that climate change will severely impair the ability of food producers to meet a growing global demand for food, water and energy, each of which is forecast to increase by between 35 and 50 percent. Adding to this strain are the expanding consumer demands of a swelling worldwide middle class.

All of these issues will be exacerbated by the disrupted weather patterns associated with global climate change.

Scientists predict that the severity of existing weather patterns will intensify, with wet areas getting wetter, and arid areas becoming drier. Much of the decline in precipitation is expected to occur in the Middle East and North Africa as well as western Central Asia, southern Europe, southern Africa and the U.S. southwest.

“We are going to be see evidence of climate change beyond rising temperatures,” Jack Goldstone, a professor of public policy at George Mason University, said during an analysis of the Global Trends 2030 report Tuesday here in Washington.

“But as more thermal energy is put into the climate as a system, we will see more extreme events like the snowfalls across the country over the past couple of weeks, the floods in Thailand, floods in Pakistan, fires around Moscow … It’s very weird we’re getting ‘100-year floods’ every five years.”

Even as members of the U.S. Congress fail to arrive at any consensus on how or whether to overhaul the country’s energy sector, the Global Trends report notes that the United States is indeed moving towards “energy independence” – albeit not on the backs of renewable sources as pushed by environmentalists and others.

In fact, the U.S. recently regained its position as the world’s largest gas producer, largely due to its introduction of new “hydraulic fracturing” (or “fracking”) technologies. Experts now say U.S. reserves will be able to continue producing for the next century.

“It seems we are going to be stuck in an oil and gas world for quite some time, and we will see the impacts accumulate along with the temperature,” Goldstone said. “The poorer countries are precisely the ones left most exposed and vulnerable to climate change, and we need saleable, efficient, cost-effective solutions – and we need to keep vulnerable cities viable.”

Despite the expanding middle class and swelling urban populations and the resulting pressures on critical resources like food and water, the scientists point out that shortages are not inevitable, particularly through the effective management of natural resources.

Here in Washington, the close timing of the new letter and the report indicate a clear and growing recognition of the climate change threat as a national security issue. Yet whether this growing consensus can influence members of Congress has yet to be seen.

“It is quite clear that our national security establishment, especially over the past couple of years, has been keenly aware of the threat of climate change – but now its time to act,” Hamilton said.