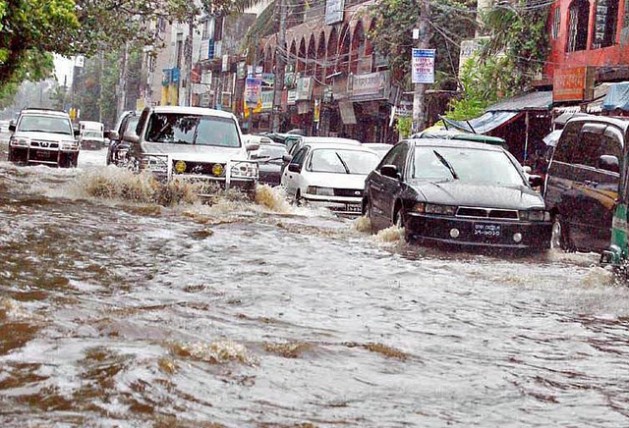 Scientists in Germany say they have found how greenhouse gases from burning fossil fuels are helping to trap the jet stream, resulting in extraordinary weather such as the 2010 Pakistan flood and the 2011 heat wave in the United States.

Giant atmospheric waves called Rossby waves are meanders in the strong, high-altitude winds known as jet streams and have a major influence on weather. These wave movements are caused by the difference in temperatures between the cold air from the Arctic and hot air from the tropics.

When the waves shift north, they suck warm air from the tropics to Europe, Russia, or the U.S., and when they swing down, they do the same thing with cold air from the Arctic, said Petoukhov.

“During several recent extreme weather events, these planetary waves almost freeze in their tracks for weeks,” he said. “So instead of bringing in cool air after having brought warm air in before, the heat just stays.”

This unnatural pattern is due to human heating of the climate through emissions of greenhouse gases that result from burning fossil fuels, according to the study published this week in Proceedings of the National Academy of Sciences.

However, this heating of the atmosphere is wildly uneven. The Arctic is warming two to three times faster than the global temperature rise of 0.8C and that affects the Rossby waves and is slowing the jet stream.

“(Our research) complements previous research that already linked such phenomena to climate change,” said Hans Joachim Schellnhuber, a co-author of the study.

IPS previously reported research showing the dramatic loss of Arctic sea ice and rapid warming of the region was affecting weather patterns in the northern hemisphere.

The unprecedented expanse of ice-free Arctic Ocean has been absorbing the 24-hour sun over the short polar summer. The heat in the water must be released into the atmosphere if the ice is to re-form in the autumn.

“This is like a new energy source for the atmosphere,” Jennifer Francis, a researcher at Rutgers University, told the Guardian.

Major declines of Arctic summer sea ice as in 2011 and 2007 have been linked to colder winters in the UK and northern Europe, Francis said. The record ice loss in 2012 has been followed by a cold and stormy winter over much of Europe.

“The jet stream is clearly weaker,” said Francis. That means weather systems, be it rain or dry conditions, are slow to move on and last longer. Ultimately, this can result in “blocking” events, such as the conditions that produced the terrible heatwave in western Russia during the summer of 2010 and floods in Pakistan, she said.

Scientists are surprised by how extreme these changes have been with a relatively small amount of warming. That has prompted some to speak out politically to urge emission reductions. On Monday, a group of Canadian and U.S. scientists pleaded with the Canadian government to stop the expansion of the Alberta tar sands oil projects and take real steps to reduce carbon emissions.

Canada ranks 58th out of 61 countries according the 2013 Climate Change Performance Index.

“The Canadian government has no credible plan for stabilizing greenhouse gas emissions, much less reducing them,” Danny Harvey, a University of Toronto climate scientist, said in a statement.

The tar sands, also called oil sands, are responsible for about 300 million tonnes of CO2 a year (production and consumption) — more than most countries. The industry, supported by the Canadian and Alberta governments, hopes to triple this amount.

In recent weeks, they have been heavily lobbying the new Obama administration to get approval for the Keystone XL pipeline. If President Obama approves it, Keystone XL will bring 800,000 barrels of tar sands oil south from Alberta to the U.S. gulf coast every day for many years.

That decision is expected in a few weeks.

Last December, at the U.N. climate conference in Doha, Qatar, Schellnhuber declared: “The first law of humanity is not to kill your children.”