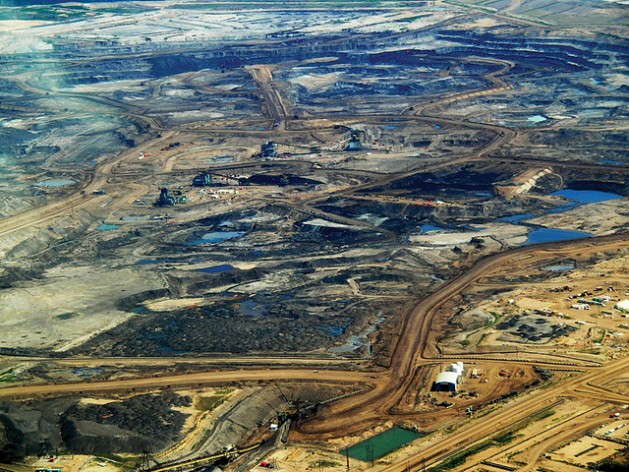 The tar sands in Alberta, Canada. Credit: howlmonteal/cc by 2.0

Activists are calling Keystone “the line in the sand” regarding dangerous climate change, prompting the Sierra Club to suspend its 120-year ban on civil disobedience. The group’s executive director, Michael Brune, was arrested in front of the White House during a small protest against Keystone on Wednesday.

“The Keystone XL pipeline is part of the carbon infrastructure that will take us to dangerous levels of climate change,” said Simon Donner, a climate scientist at the University of British Columbia.

To permit the pipeline would represent a heartbreaking acquiescence to climate change on the part of President Obama and our national leaders.

“By itself, Keystone won’t have much of an impact on the climate, but it is not happening on its own,” Donner told IPS.

Carbon emissions are increasing elsewhere, and the International Energy Agency recently warned humanity is on a dangerous path to four degrees C of warming before the end of this century. Children born today will experience this. Preventing that dire future is inconsistent with expanding tar sands production, Donner said.

A new study released this week revealed that the volume of Arctic sea ice is declining rapidly. Ice volume has fallen 80 percent since 1980, according to the latest data from European Space Agency satellite, CryoSat-2. Summers with a sea ice-free Arctic are only a few years away, scientists now agree. This will have significant and permanent impacts on weather patterns in the Northern Hemisphere.

“Keystone XL is the key to opening up the expansion of the tar sands industry,” said Jim Murphy, senior counsel with the National Wildlife Federation.

“By rejecting the Keystone XL tar sands pipeline, we can keep this toxic oil in the ground,” Murphy said in a statement.

Keystone XL is intended to bring 700,000 to 800,000 barrels of a heavy, tar-like oil from the northern Alberta tar sands 2,400 kilometres south to the refineries on the Gulf Coast. Nearly all the resulting fuels are destined for export.

Since the seven-billion-dollar Keystone XL crosses national borders, it is up to President Obama to issue a permit declaring the pipeline serves the “national interest” in order for it to be approved.

“The only way Keystone XL could be considered in the national interest is if you equate that with profits for the oil industry,” Steve Kretzman of Oil Change International previously told IPS. Oil Change is an NGO that researches the links between oil, gas, coal corporations and governments.

“It couldn’t be simpler: Either we leave at least two-thirds of the known fossil fuel reserves in the ground, or we destroy our planet as we know it,” wrote Sierra Club’s Michael Brune in explaining the decision to engage in civil disobedience.

“That means rejecting the dangerous tar sands pipeline that would transport some of the dirtiest oil on the planet,” said Brune.

Tar sands carbon emissions on a “well-to-tank” basis (i.e., production) result in emissions that are on average 72 to 111 percent higher than other U.S. transportation fuels, according to the nonpartisan Congressional Research Service.

“Climate change is a complicated problem. Lots of things need to be done to address it. We’re at a point where changes need to happen soon,” he says.

Writing in the Daily Kos Saturday, Phaedra Ellis-Lamkins, CEO of the environmental justice group Green For All, says, “Hurricane Katrina taught us a lesson – and Superstorm Sandy reinforced it. People living in neighborhoods with the fewest resources have a harder time escaping, surviving, and recovering from disasters.

“And they’re more vulnerable to the extreme weather climate change will bring. For example, African-Americans living in Los Angeles are more than twice as likely to die during a heat wave than other residents of the city,” she says in a piece titled “Why People of Color Should Care about the Keystone Pipeline”.

“To permit the pipeline would represent a heartbreaking acquiescence to climate change on the part of President Obama and our national leaders. It would be throwing our hands up helplessly in the face of one of the biggest threats our country has ever faced. That’s not the kind of leadership we voted for.

“There are certain points in history, like the Civil Rights Movement, when the consequences of inaction are so great that we have to make bold choices,” Ellis-Lamkins says. “This is one of those times.”