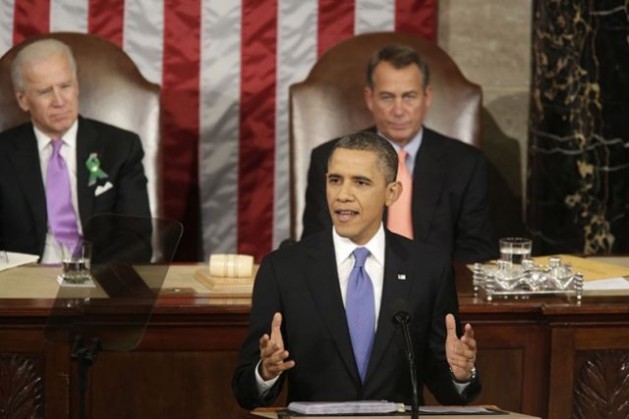 WASHINGTON, Feb 13 2013 (IPS) - In a major annual address Tuesday night, President Barack Obama offered further details on a broad and ambitious range of policy priorities, taking advantage of perhaps his single most significant opportunity to guide the public conversation on his second-term agenda.

Discussing some of the most potent debates currently taking place in Washington – including gun control, immigration, climate change, voting rights and U.S. counterterrorism efforts – the president continued a recent trend of speaking around the partisan immobility that has characterised the U.S. Congress.

Instead, he engaged in a campaign-style attempt to explain his stance on these issues to the estimated 38 million people who tuned in to primetime coverage.

While the message was mixed, there will be clarity soon. We’ll see whether or not President Obama is indeed serious about addressing the climate crisis by his choice on the Keystone XL Pipeline.

Following a surprisingly progressive – and forceful – second inaugural speech, in late-January, the first State of the Union speech of President Obama’s last term in office was overwhelmingly devoted to issues of fixing the United States’ stuttering economy and still high unemployment rate. Focus on these issues was relatively absent from the inaugural address, in favour of broader themes.

On Tuesday, however, the president sought to tie the two more closely together. He offered not only a reiteration of his current policy stance on ongoing debt and austerity negotiations, but also attempted to explain how legislative action on issues related to climate change, immigration, manufacturing and infrastructure updating – and even setting a higher minimum wage – were key to safeguarding the U.S. economy.

Energy independence was particularly key in this regard.

“Today, no area holds more promise than our investments in American energy,” the president said, speaking before both houses of Congress and other dignitaries. “After years of talking about it, we are finally poised to control our own energy future … But for the sake of our children and our future, we must do more to combat climate change.”

The president announced his intent to push for the creation of a new Energy Security Trust that would use revenues from domestic oil and gas production to fund research into renewable energy sources, and called for more spending on wind and solar energy. He also urged Congress to look again at market-based “emissions trading” solutions.

The president proposed a new focus on energy efficiency, with a goal of halving wasted energy by 2020. Importantly, unlike other initiatives, such a process could be done without the participation of Congress. Indeed, in line with a growing chorus of calls from environment groups, the president warned Congress that he would increasingly turn to executive actions – circumventing legislators if they did not move on climate-related issues.

Still, many environmentalists were frustrated by a Obama’s pledge to expand oil and gas drilling, and by his failure to clarify his stance on a contentious pipeline, currently pending authorisation, that would bring dirty “tar sands” oil from Canada through the U.S. Midwest.

“The priority President Obama placed on climate change was welcome, but his emphasis on fossil fuels like oil and gas was not at all compatible with such prioritisation,” Karen Orenstein, a researcher with Friends of the Earth, an advocacy group, told IPS.

“While the message was mixed, there will be clarity soon. We’ll see whether or not President Obama is indeed serious about addressing the climate crisis by his choice on the Keystone XL Pipeline. He must reject the pipeline if his words in tonight’s address are to be worth more than the paper on which they’re written.”

Orenstein also noted that the president’s stance on climate change will have significant ramifications for his hopes for global development.

“Decades of development gains will be undermined,” she warned. “It is impossible to eradicate extreme poverty without forcefully confronting the U.S. role in causing climate change.”

While domestic issues were the inevitable focus of President Obama’s address, he did range farther afield, including referencing the United States’ ongoing responsibility towards poor and developing countries. In this he offered few specifics, however, and tied such rhetoric directly to the national and global economy.

“We also know that progress in the most impoverished parts of our world enriches us all,” the president stated.

He pledged that the United States would “join with our allies to eradicate such extreme poverty in the next two decades”, promising to work to connect more communities to the global economy and to empower women and poor communities. The president also promised to focus on saving children from preventable deaths and to bring about “an AIDS-free generation”, Washington’s stated policy goal on the issue.

On more standard foreign policy issues, President Obama made a major announcement on U.S. military forces in Afghanistan, reportedly decided upon only earlier in the day, stating that half of U.S. troops – 34,000 – would be back home by this time next year.

That number is far higher than called for by some military top brass, but is in line with the preferred recommendation made by the former top U.S. military commander in Afghanistan, General John Allen.

And while final details are still being negotiated on whether and how U.S. troops will stay in Afghanistan thereafter, the president was clear on his own vision.

“After a decade of grinding war, our brave men and women in uniform are coming home,” he stated within the first minute of his address, noting later, “And by the end of next year, our war in Afghanistan will be over.”

Many had also hoped for a specific discussion of the president’s hopes to significantly reduce the United States’ massive stockpile of nuclear weapons.

This issue has recently been a source of regular discussion here in Washington, as the president’s nominee for secretary of defence, Chuck Hagel, is aligned with a group that prominently endorses an eventual goal of a world free of nuclear weapons. (Earlier on Tuesday, Hagel cleared a key but highly contentious Senate committee hearing on a party-line vote.)

Yet perhaps in part due to complications brought about by Tuesday’s test by the North Korean government of a nuclear weapon, Obama declined to include specifics on the issue. Instead, he noted only that “we will engage Russia to seek further reductions in our nuclear arsenals.”

“The president is making it clear that the United States will continue to reduce the size and role of outdated Cold War nuclear arsenals,” Daryl Kimball, executive director of the Arms Control Association, a Washington watchdog, told IPS.

“Further reciprocal reductions of these bloated arsenals would increase our leverage on other nuclear-armed states to exercise restraint and join in serious multilateral disarmament discussions.”

The third and most important part of President Obama’s new agenda will come when he unveils his visions for the 2014 national budget, slated for mid-March.