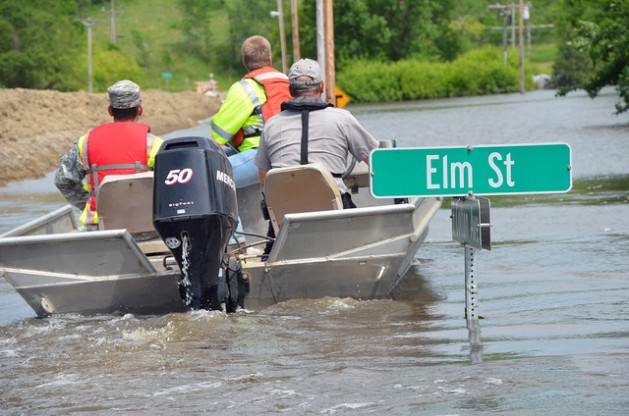 WASHINGTON, Feb 7 2013 (IPS) - Environmentalists here are warning that the United States is not on track to meet a target of a 17-percent reduction in carbon emissions by 2020, despite President Barack Obama’s stated commitment.

Yet, according to a new report by the World Resources Institute (WRI), a Washington-based environment think tank, the country can still meet that goal by using existing federal laws and state action, and investing in renewable energy sources.

“Even without Congressional involvement or new technologies, the U.S. can meet its modest goals of a 17-percent reduction,”Nicholas Bianco, a senior associate at WRI and lead author on the report, told IPS. “We don’t need to wait for new technologies, it can be done now.”

The impact of climate change in the United States is becoming increasingly apparent, in the form of extreme weather events such as record-breaking heat waves, droughts, heavy rainfall, coastal flooding and forest fires. Weather-related damage in the U.S. reportedly totalled 60 billion dollars in 2011, and these amounts are expected to rise in the coming years.

At the state level, it focuses on potential greenhouse emissions reductions from policy initiatives in transportation. Yet it also encourages states to venture into areas typically considered the realm of the federal government, focusing on power plants and industry, as well as emissions from refrigerators and air conditioners.

A significant motivation in such approaches is to circumvent the U.S. Congress, which many agree could prove to be one of the biggest obstacles to reaching agreements on reducing climate change.

“Partly due to a small but vocal number of climate-change deniers, and partly because a significant portion of the Congress is beholden to the fossil fuels industry, U.S. companies don’t appreciate the long-term benefits of an economy that is more fuel efficient and based more on renewable energy,” Michele de Nevers, a senior programme associate at the Center for Global Development (CGD), a Washington think tank, told IPS.

In lieu of legislation

Power plants are the leading cause of greenhouse gas emissions in the United States, followed by the transportation sector, which is responsible for about 30 percent of emissions.

Because state and local regulations play a significant role setting policy for both of these sectors, Bianco and his co-authors are pushing states to achieve reductions in the transportation sector through policies that encourage the use of lower-carbon fuels and lowering vehicle miles travelled. In particular, they are encouraging local governments to prioritise the creation of policies that will improve the efficiency of motor vehicles, and significantly raise standards on all types of vehicles.

If states are able to improve energy efficiency, Bianco suggested, the outcomes will be positive for both governments and the public, as investments in renewable energy will save billions of dollars in long-term costs, including to the environment.

“People save money and it’s relatively cheap,” he said. “It may require a little investment, but this will be quickly paid off.”

The report also recommends the need for increased regulation of the power sector at the state level, as the United States shifts from coal-fired generation toward natural gas-fired and renewable generation. This trend has been driven by dramatic increases in natural gas extraction.

However, scientific research is now showing evidence of significant methane emissions from the use of hydraulic fracturing (or “fracking”), the now widely used approach in the U.S. whereby millions of gallons of water and chemicals are pumped underground to break up rocks and release trapped gasses. This could mean that natural gas could have a greater impact on global warming overall than even coal, due to emissions that escape into the atmosphere during the extraction process.

On Wednesday, the EPA released data that, for the first time, suggests that fracking is the second-highest source of U.S. emissions, behind power plants.

“In fact, there is a very safe and cheap technology to capture them and prevent these emissions from escaping,” de Nevers said.

“The (WRI) report encourages states to strengthen their regulations on fracking, and doing so would go a long way toward addressing the issues that local states are most concerned about, like toxic chemicals getting into the water supply.”

Yet evaluating how much methane is leaking from an increasing number of natural-gas operations, and then limiting such emissions, will be a challenge, Bianco and others are warning.

According to Susan Tierney, a WRI board member, the United States’ goal of a 17-percent reduction in greenhouse gas emissions was actually lower than was originally recommended by environmentalists. This level was agreed upon, she says, because 17 percent was considered achievable, albeit modest.

“Even so,” she says, “the U.S. still has not made progress toward achieving the target, and emissions will continue to rise if it continues along its present rate.”

According to CGD’s de Nevers, the best thing that could happen to U.S. policymaking now would be to get agreement on putting a tax on carbon emissions.

“Only economics will motivate a lot of the actions that are referred to in this report,” she warns. “But the only way to get this‘price tag’ on emissions is through Congressional legislation, and that is just not happening.”

But, she continues, “In the meantime, states and local policies can fill this gap.”