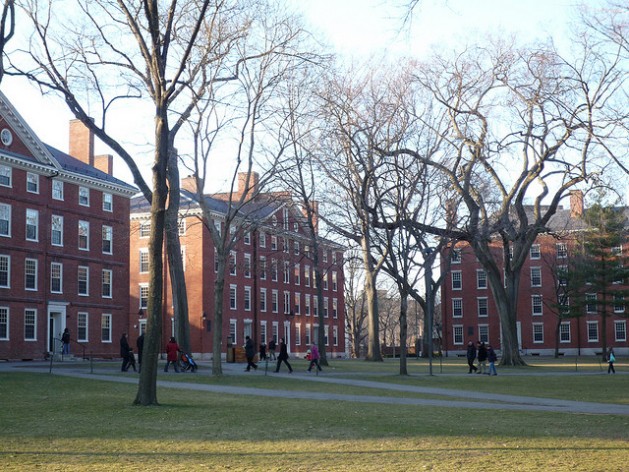 On Tuesday, a city supervisor in San Francisco introduced resolutions calling on the city’s retirement fund to “divest” all money it has in fossil fuel companies and gun manufacturers. That followed a significant recent decision by the city of Seattle’s two-billion-dollar retirement fund to actively shed its stocks in companies that contribute to climate change.

And Wednesday, former U.S. vice-president Al Gore, a prominent climate activist and Harvard alum, sided with a strengthening campaign to get that school to back out of its oil and gas investments.

“If I were a student, I would support what you’re doing,” Gore told students, speaking on campus at Harvard. “But if I were a board member I would do what I did when we took up the Apartheid issue. This is an opportunity for learning and the raising of awareness, for the discussion of sustainable capitalism.”

In fact, the divestment movement here in the U.S., which has burgeoned following the November presidential election, took its inspiration from the anti-Apartheid experience.

“During the 1980s, 155 schools came out against the South African Apartheid, and so we’re modelling a lot of what we’re doing now on that,” Jamie Henn, communications director for 350.org, an advocacy group that has spearheaded the divestment push, told IPS.

“So, it made perfect sense for us to start with universities, as these institutions have a special responsibility to make their investments live up to their missions. Many have publicly committed to sustainability and solving the big issues of the day, yet many are still putting tens of millions of dollars into companies that are wreaking havoc on the planet.”

Hampshire College, a small school in Massachusetts, was the first to follow the campaign’s lead; in 1979, it was also the first school in the United States to divest from South African holdings. Two more colleges have now followed suit.

While these are each small and notably progressive schools, Henn reports that student groups have sprung up around the issue on the campuses of at least 230 schools, including at each of the elite Ivy League schools and several large state schools. At least 20 institutions have now started processes to look at divestment options.

“We’ve been blown away by how quickly the campaign has spread – right now it’s the fastest-moving student environmental campaign of the past decade, maybe ever,” Henn says.

“And an increasing number of students are also increasing pressure on politicians to take action. Look at these numbers – Harvard’s endowment is 32 billion dollars. That perks up the ears of a lot of people.”

The Harvard administration was initially cold on the idea of divestment, however, reportedly refusing for months to agree to a meeting between the school president and student representatives on the issue. But following a concerted campaign – and a campus-wide referendum in which nearly three-quarters of students voted in favour of divestment – recent weeks have seen a significant softening of tone.

“Finally, at the end of the semester, the administration felt enough pressure to agree to a meeting with a couple of members of the school’s board, and that took place last Friday,” Alli Welton, a co-coordinator of Divest Harvard, a student group, told IPS.

“In that meeting, the board members said they were very concerned about climate change, but questioned whether divestment would have a significant impact on the issue. However, they also noted that divestment of direct holdings wouldn’t have a large impact on the school’s endowment.”

Indeed, that latter contention is supported by a recent report by Aperio Group, an investment management firm, which found that divesting of climate change-related holdings would bring with it remarkably little risk for university endowments.

Welton notes that negotiations between students and the administration are going to continue (“That’s pretty good after a semester of not talking to us”), with a decision slated for February 15. While she says she’s “very encouraged” by the administration’s new willingness to talk, Welton refers to a far larger impact on the student body.

“I’ve never seen anything like this happen around climate change on campus – it seems like students know a lot more about this issue and are feeling its urgency,” she says. “It really feels as though divestment is a very clear way that we can effect change.”

Critically for such a large issue as climate change – and one on which many activists have repeatedly felt let down by failures at the national and international levels to agree on substantive long-term solutions – Welton notes that organising around investments makes a massive issue feel more immediate.

“These local-level initiatives make climate change more accessible for people, and make it more possible for them to get involved,” she says. “We can see very clearly that we’re part of something gigantic, and that definitely creates identity for a national and even international movement.”

According to 350.org’s Henn, the second phase of the organisation’s divestment strategy will focus on city governments and pension funds. In this, Seattle’s actions have already become a model of sorts.

Led by the city’s mayor, Mike McGinn, in turn responding to exhortations by 350.org, last month Seattle’s retirement and pension funds reported that they had some 17 million dollars invested in oil and gas companies. On Jan. 31, those funds moved to create a mechanism to look into how potential divestments could take place.

“This was a critical first step, as there was no such mechanism even in existence,” Aaron Pickus, a spokesperson for the mayor, told IPS.

While no decision has yet been made on how that money should now be used, Pickus says, “There has been a general request that it not be re-invested in companies that are polluting our climate.”

The public response has been positive, he notes, even while constituents understand that the city is at the beginning of a process that could span the next half-decade.

“There is a rapidly growing sense that something – in fact, many concrete things – need to start happening to change the trend on how we approach climate change,” Pickus says.

“That includes how we invest – not just in pensions but also, more generally, how we’re spending taxpayer money. For instance, are we going to invest in new, wider highways or in green transit options?”