OP-ED: Weird, and Getting Weirder 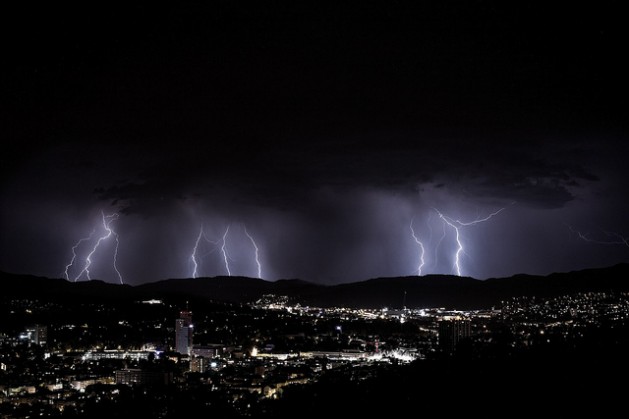 A thunderstorm over Zurich, Switzerland. Credit: Kuster & Wildhaber Photography/cc by 2.0

UXBRIDGE, Canada, Jan 29 2013 (IPS) - Weird is the only way to describe January temperatures whipsawing between record warm and arctic cold over a span of a few days. Experts say that is what climate change looks like: weird, record-shattering weather.

Here’s a fact that goes beyond weird to astonishing. Anyone who is 27 years old or younger has never lived through a month that was colder than the global 20th century average. In other words, we’ve had 334 consecutive months with above average temperatures, according to the U.S. National Oceanic and Atmospheric Administration.

Last summer, the Arctic sea ice shrunk to half of what it used to be during summers only three decades ago. Our planet’s weather is driven largely by the two cold polar regions and the warm tropics. With the Arctic defrosting, it should be no surprise our weather is getting weird. And that it’s not going to get better.

Our planet is heating up because we each year put thousands of millions of tonnes of carbon dioxide (CO2) into the atmosphere by burning coal, oil, and natural gas. CO2 acts as heating blanket keeping the planet warm by trapping some of the sun’s heat.

The amount of extra heat-energy being trapped is like exploding 400,000 Hiroshima atomic bombs per day 365 days per year, calculates James Hansen, a climate scientist who heads the NASA Goddard Institute for Space Studies.

Cautious scientists like Hansen are terrified of what’s coming. Conservative institutions like the World Bank and accounting giant Price Waterhouse Coopers (PwC) have warned we’re on a path to heating the entire surface of the planet by an average of four or five degrees C before 2100. That translates into eight to 12 degrees C hotter in places like Canada.

In the U.S., the just released National Climate Assessment projects that average temperatures could rise by five to 10 degrees Fahrenheit after 2050. This increase is akin to our body temperatures soaring to fatal feverish levels.

We all should be terrified for ourselves and especially for our children and grandchildren. As U.S. President Barack Obama put it during his Jan. 21 inauguration speech, failure to respond to the threat of climate change “would betray our children and future generations”.

What scientists, and now President Obama, are saying is that we know the fossil fuel energy that powers our societies is destroying them. Our challenge is to re-engineer our societies and lifestyles to prosper on green alternatives. Time is not on our side. The sobering climate math says CO2 emissions must start to decline in the next three to five years and continue to fall to give our kids hope for a decent future.

Because climate change affects everything from food to water, nothing is more important than this.

Here’s what we can do right now. As individuals we can reduce our CO2 emissions five percent this year, and each year after. There are a thousand ways to do this: we can walk and bike more and drive less, adjust our thermostats, add insulation to our homes, eat less meat, etc.

The typical family could reduce their energy use 60 to 75 percent, saving thousands of dollars, according to Godo Stoyke, an Alberta energy expert and author of “The CarbonBuster’s Home Energy Handbook”.

Our communities could join the Transition Town movement. This is a volunteer, non-profit movement focused on reducing community-wide dependence on fossil fuels while increasing local resilience and self-sufficiency in food, water, energy, culture and wellness.

There are over one thousand transition communities around the world. It took just one person to put the idea to friends one night at a pub in the village of Ashton Hayes in Cheshire, England. Two years later, residents had cut their energy costs by 20 percent.

Peterborough, Ontario has a Transition Town community where they’re creating their own currency – the Kawartha Loon – to support local business and strengthen their community. Find out what they are doing here.

There are over 130 transition communities in 34 U.S. states. Transition Salt Lake is focused on building resilience and having more fun with less stuff. Transition Houston has taken root in at least eight neighbourhoods. Transition Los Angles has dozens of activities and events each month. Find out more about Transition USA

Denial or waiting for someone else to tackle this guarantees a future we don’t want. Before you go, please consider this question: What is the legacy you want to leave your family and the next generation?