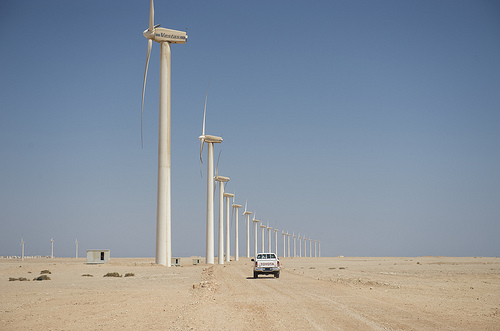 ABU DHABI, Jan 17 2013 (IPS) - Trying to predict the future of the energy sector is like trying to predict the weather in London in an era of global warming. But delegates had a go at it during the three-day World Future Energy Summit that ended in Abu Dhabi on Jan. 17.

They foresee new world leaders in the energy sector, the development of innovative forms of storing renewable power, and the creation of super grids to transport this energy, among the many possibilities. But all this will be accompanied by a host of “enormous” challenges, in the words of one expert.

As a representative of the world’s biggest oil and gas company by capitalisation, Mauritzen believes there is a future role for such corporations despite their checkered reputation. He stressed that an “integrated set of solutions” would be necessary to meet the needs of the world’s expanding population, forecast to reach nine billion by 2050, and he sees fossil fuels as being an inevitable part of the energy mix.

But many other delegates see various possibilities, especially as an increasing number of countries turn to renewable energy.

Over the past three years, the company has boosted its climate change services, and on Friday Haughland announced the creation of a new research unit in Holland that will focus on “smart grids” and “super grids”.

For the DNV executive, battery technology and super grids for energy are key to the successful development of the renewables field.

“Storage is about efficiency,” Haughland told IPS. “The demand for energy is going up and up, and so in order to be efficient, we should have the ability to store energy when we have enough of it, and to use it when we want.”

But storage technology lags behind other areas of the “green” sector, and batteries developed to store renewable energy are still way too expensive to be competitve, he said. Transportation of batteries is also a concern for environmentalists, and that’s where the grids come in.

Super grids will be used to transport high amounts of energy over long distances, and this could revolutionise the green sector as solar energy produced in one region can be sent to another, Haughland said.

“These will be essential for renewable energy over the next 20 years,” Haughland said. “We see super grids already developing in India, China and some places in Europe.”

Another scenario is the production of electricity on site where it’s needed, with the result that big traditional power plants may one day become a thing of the past. Localised production of electricity through the use of solar panels, for example, is already happening around the world and several participants at the summit predicted that it will become much more common.

“One of the things I’m most excited about is the move from a central utility business model, where utilities have large power plants and they’re feeding power into the grid, to smaller generating sources at the point of consumption,” said Scott Burger, a solar markets analyst at U.S.-based GTM Research.

“We’re already starting to see that in areas of the world like Germany and Japan where there is a high penetration of photovoltaic systems on houses and commercial buildings,” he told IPS. “So there’s going to be a need for traditional utility business models to adapt to that.”

Countries and utility companies are waking up to this prospect and trying to diversify, Buger added, but national policies differ largely around the globe. Some governments still seem reluctant to invest in new technology, while others are making a loud and clear commitment to the sector.

Abu Dhabi, for instance, aims to generate seven percent of its power from renewable energy by 2020, according to Dr. Sultan Ahmed Al Jaber, the chief executive officer of the emirate’s renewable energy company Masdar.

In fact, many of the predictions by delegates at the energy summit are already a reality at the company’s multi-billion-dollar project known as Masdar City – a showcase for “green” energy that is being built in stages and expected to be completed by 2025.

The first stage comprises a science and technology institute, with living quarters for students and several shops, all powered by solar energy that’s fed into the emirate’s electricity grid. Buildings are designed in a way to make the most of natural resources, including use of the wind to cool hot outdoor areas.

If, despite some delays and revisions, the project proves to be successful on a larger scale, it could represent a brave new world.