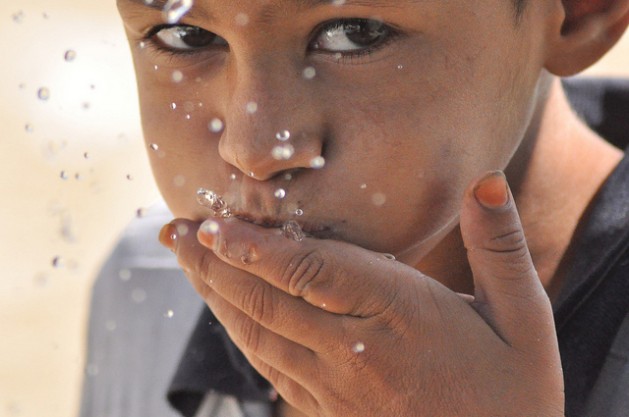 Children like this boy in Gaza face the worst of water scarcity. Credit: Eva Bartlett/IPS

ABU DHABI, Jan 16 2013 (IPS) - The volatile politics of the Middle East have long been dominated by the fluctuating fortunes of a single commodity: oil.

But when the oil-blessed region runs out of water, there could be a change in the political landscape, triggering potential conflicts. The world’s future wars, experts predict, will be over water, not oil.

U.N. Secretary-General Ban Ki-moon warned last year that water shortages contribute not only to poverty but also cause social hardships and impede development.

The lingering economic paradox was perhaps best described by an unnamed Kuwaiti official who once remarked, “Whenever we dig for water, we strike oil.”

At the first International Water Summit (IWS) in Abu Dhabi Wednesday, over 30,000 participants, including political and business leaders, met to formulate a strategy to underscore the importance of water for the political and economic stability of the region.

Munqeth Meyhar, chairman/Eco Peace, at Friends of the Earth Middle East (FoEME), told IPS the region has experienced many environmental concerns lately, including climate change. Water resources are becoming increasingly scarce, especially for the millions there who already lack access to fresh water.

He pointed out that some of these countries, including Yemen, Saudi Arabia, and Iraq, are facing unique problems that require immediate attention.

“One shared factor of all the countries in the Middle East is their lack of water resources and poor water management,” said Meyhar, who closely monitors the growing water crisis in the region.

The Middle East has some of the world’s largest oil reserves, which produces most of the area’s wealth. Even so, the region’s climate and environment make living harsh, he said.

The Middle East requires water resources and suitable land for agriculture. But much of the land available for producing food is destroyed by increasing desertification.

Desertification is a sweeping environmental problem, with vast effects in countries such as Syria, Jordan, and Iraq, said Meyhar.

Universal causes for a spread of arid environment are unsustainable agriculture practices and overgrazing. Agriculture uses 70 percent of water in this region.

It is common to misuse land by heavy irrigation in the Middle East. Droughts are more frequent, and contribute to the changing landscape, he noted.

The overuse of water in agriculture is affecting the countries’ already undersized water resources.

As the world faces possible water scarcities in the next two to three decades, the U.S. intelligence community has portrayed a grim scenario for the foreseeable future: ethnic conflicts, regional tensions, political instability and even mass killings.

During the next 10 years, “many countries important to the United States will almost certainly experience water problems – shortages, poor water quality, or floods – that will contribute to the risk of instability and state failure, and increased regional tensions,” stated a National Intelligence Estimate released in March 2011.

And in July of the same year, Chris Kojm, chairman of the National Intelligence Council, predicted that by 2030, nearly half of the world’s population – currently at more than seven billion – will live in areas of severe water stress, increasing the likelihood of mass killings.

The cost of water in Jordan increased 30 percent in 10 years, due to a shortage of groundwater, he said. And in recent years, Jordan has not been able to produce enough food to sustain its populations.

Meyhar said water scarcity has damaged the standard of living for inhabitants of the countryside, causing a big flux of movement towards major cities. This is a problem facing all Middle Eastern countries.

Asked where desalination was an answer, he said desalination plants are an overuse of water resources in the Middle East. Seventy percent of desalination plants in the world are located in this area, found mostly in Saudi Arabia, the UAE, Kuwait, and Bahrain. Israel is joining this club on a fast track, he noted.

While the plants produce water needed for the arid region, they can cause problems for health and the environment.

The seawater used most in desalination plants has high amounts of boron and bromide, and the process can also remove essential minerals like calcium.

Also, the concentrated salt is often dumped back into oceans where the increased salinity affects the ocean’s environment. The plants harm local wildlife and add pollutants to the region’s climate. In addition, desalination is the most energy-costing water resource, said Meyhar.

The high use of energy results in raised energy prices and higher prices on water produced, hurting the consumer. The water produced can be beneficial in easing a lack of freshwater, but these areas have tendencies to overuse their natural resources.

Concerns with the large amount of desalination plants in the Middle East focus on the improper dependency they will cause, instead of encouraging alternate forms of water and energy and conserving freshwater.

The Middle East has numerous struggles with its current water resources, and the region needs more than one solution to generate an optimistic environmental position for the future.

“In our view, water sector reform in domestic, agricultural, touristic and industrial usage is the first step to be taken towards solving the Middle East water challenges,” he declared.

The countries that comprise the Gulf Cooperation Council (GCC)- including Bahrain, Kuwait, Oman, Qatar. Saudi Arabia and the UAE – are expected to invest over 100 billion dollars in investments in the region.

“GCC countries have been investing heavily on water sustainability over the last few years”, says Peter McConnell, Show Director for the IWS, “and the Project Stream will in essence become a networking platform that will connect solution providers from around the world to project developers from the region.”

These projects range from multi-billion dollar government infrastructure ventures to high-tech innovations in areas such as low-energy desalination, water leakage prevention and water efficiency which will all contribute in a significant way to addressing the worldwide challenges surrounding clean water supply, he added.