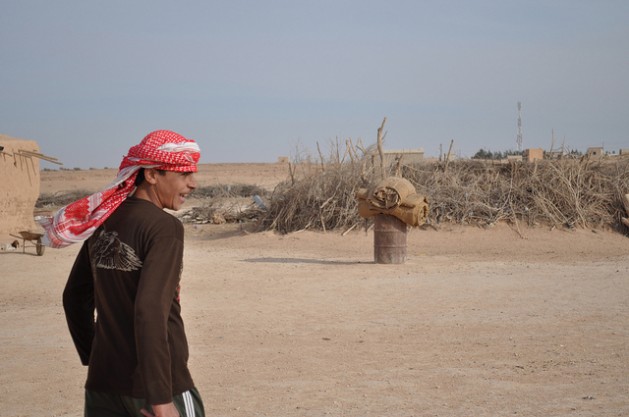 On a drought-hit farm in Syria. Credit: Caterina Donattini/IPS

UNITED NATIONS, Jan 11 2013 (IPS) - Amidst a growing water crisis in the predominantly arid Middle East and North Africa (MENA), some of the world’s most influential water experts will meet Jan. 15-17 at the International Water Summit (IWS) in Abu Dhabi, United Arab Emirates (UAE) to look for sustainable solutions.

The World Bank has already warned that MENA is the world’s “most water-scarce region, home to 6.3 percent of the world’s population but with just 1.4 percent of renewable fresh water.”

The six countries that comprise the Gulf Cooperation Council – Bahrain, Kuwait, Oman, Qatar, Saudi Arabia and UAE – are expected to spend a staggering 725 billion dollars over the next two decades on new water projects, desalination plants, infrastructure-building and high-tech innovations.

Asked to assess the water problems in the region, Dr. Anders Jagerskog, associate professor and director of knowledge services at the Stockholm International Water Institute (SIWI), told IPS, “The water crisis in the MENA region is severe.”

The region, he pointed out, ran out of freshwater in order to achieve food self-sufficiency – mainly have the water needed for irrigation – already in the 1970s.

“But since then, the region has managed through increased import of ‘virtual water’,” he noted, meaning “the water embedded or used to produce the foodstuff imported to the region, for example”.

The problem is perhaps worst in Palestine, where there is both very limited availability as well as the conflict that is severely affecting the possibilities for the Palestinians to develop a well- functioning water management since they are not in control of the water resources, he added.

Besides countries like Jordan and Yemen, the demand for renewable fresh water has also continued to increase in the six GCC countries, according to water experts.

At the Abu Dhabi summit, Project Stream will offer a major opportunity for developers and investors to “connect and accelerate the building of sustainable water solutions”.

The summit, which is is part of the Abu Dhabi Sustainability Week being hosted by Masdar, described as “a sustainable green energy city of the future”, will also bring together financiers and some of the world’s leading engineering, technology and service providers.

Peter McConnell, show director for IWS, says that GCC countries have been investing heavily in water sustainability over the last few years.

“And Project Stream will in essence become a networking platform that will connect solution providers from around the world to project developers from the region,” he added.

“These will contribute in a significant way to address the worldwide challenges surrounding clear water supply,” he added.

Asked if desalination was an answer, SIWI’s Dr. Jagerskog told IPS that part of the solution lies in increased desalination, but desalinated water is only an economically viable solution for industrial and domestic uses while it is not economically efficient for irrigation.

While cost varies – and is decreasing somewhat – the price of 1,000 litres of water to be desalinated is between 0.8 and one dollar.

While a kilo of cereal requires about 1,000 litres of water, it is evident that only the cost of water to produce one kilo of cereal is close to a dollar.

“So, the future lies in a combination of things – desalination of water for cosmetic and industrial purposes, increased water use efficiency, increased re-use of treated waste water for irrigation, as well as continued reliance on imported ‘virtual water’,” Dr. Jagerskog said.

The industry think-tank Global Water Intelligence (GWI), which is collaborating with Project Stream in Abu Dhabi, has reported major planned investments by Gulf countries, amounting as much as 725 billion dollars over the next two decades.

Between 2013 and 2017, Qatar is planning to invest some 1.1 billion dollars in desalination capacity through independent water and power projects (IWPPs).

Kuwait has a combined municipal water/wastewater capital expenditure budget of 4.4 billion dollars from 2013 to 2016, while the UAE’s budget reaches 13.0 billion dollars.

Saudi Arabia is expected to spend about 53.9 billion dollars over the next two decades to build, operate and maintain water projects to meet the growing demand in the Kingdom, according to GWI estimates.

“They create tensions in conflict-prone regions. Too often, where we need water we find guns. There is still enough water for all of us – but only so long as we keep it clean, use it more wisely, and share it fairly,” he says.

And according to the United Nations, some 700 million people in 43 countries suffer from water scarcity.

By 2025, about 1.8 billion people will be living in countries or regions with absolute water scarcity, and two-thirds of the world’s population could be living under water-stressed conditions.

With the existing climate change scenario, almost half the world’s population will be living in areas of high water stress by 2030, including between 75 million and 250 million people in Africa.

In addition, water scarcity in some arid and semi-arid places will displace between 24 million and 700 million people.

Sub-Saharan Africa has the largest number of water-stressed countries of any region, according to the United Nations.