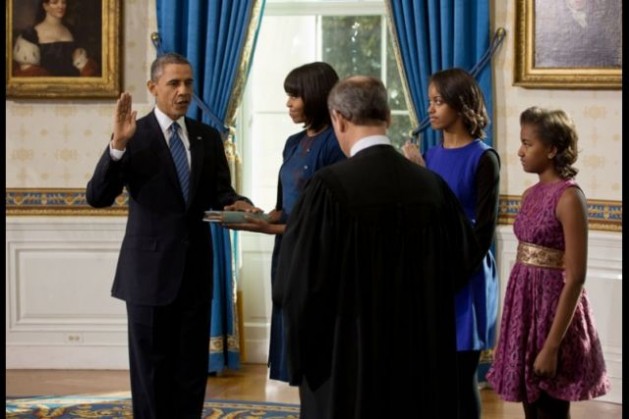 WASHINGTON, Jan 22 2013 (IPS) - Following surprisingly forceful statements on the threat of global climate change by President Barack Obama during his second inaugural address on Monday, campaigners here are expressing cautious optimism that a second Obama administration will be able to see through some of the substantive actions on carbon reduction that largely eluded the president’s first term.

“We will respond to the threat of climate change, knowing that the failure to do so would betray our children and future generations,” President Obama said Monday, speaking before a million spectators gathered in front of the U.S. Congress in central Washington.

“Some may still deny the overwhelming judgment of science, but none can avoid the devastating impact of raging fires and crippling drought and more powerful storms.”

In addition to sounding vigorously – and, for some, surprisingly – progressive themes on equality, the president also pledged to help the United States “lead … the transition” towards sustainable energy sources.

On Tuesday, his press secretary reiterated that clean energy technologies would be a “huge” part of the new global economy, “whether anyone in Washington or elsewhere likes it or not.”

Ultimately, climate change received more focus in the inaugural address than did any other policy area – a stark turnaround from the administration’s relative neglect of the issue during its first term.

“It was very heartening to hear the president’s comments on this issue, and we’re enthusiastic that he mentioned making this part of his legacy,” Adrianna Quintero, the executive director of La Onda Verde, the Natural Resources Defence Council’s Latino Advocacy programme, told IPS.

On Thursday, Quintero was involved in a joint letter, signed by 20 Latino organisations, including the Americas Business Council, calling on President Obama to take executive action to curb pollution at existing coal-fired power plants.

Latinos were a significant – some say deciding – factor in President Obama’s re-election, and demographics analysis suggests they will remain a decisive voting bloc for decades.

“We want the president to know that Latinos support him on this and want action on climate change,” Quintero says. “We care about immigration, health care and other issues, but this is central to our lives as well, as it affects the health and wellbeing of our communities.”

Environmentalists are focusing particular attention on U.S. coal reserves, both in terms of their potential use in domestic power plants but also, and especially, for their potential export. As U.S. coal use has steadily decreased in recent years, in line with trends in many Western countries, coal use in developing countries has increased dramatically.

“The big story out of the United States is the expansion of the country’s coal export – this is the biggest domestic threat to the climate,” Kelly Mitchell, a campaigner with Greenpeace, an environment watchdog, told IPS.

“Contrasted with the country’s great successes over the last couple of years in moving away from coal use, we’re now seeing risk of those emissions moving offshore.”

Indeed, a decade ago coal made up a full half of the electricity production in the United States; today, that figure is down to just a third. Since 2008, just one new coal plant has broken ground in the country, versus around 100 that had been planned under the administration of former president George W. Bush.

On Tuesday, the Sierra Club, a venerable environment group that has spearheaded a major anti-coal campaign in the United States, announced that more than 50 gigawatts – 130 plants – of coal-fired production capacity had been retired since 2010, around a sixth of the country’s total coal usage.

Yet as domestic consumption has plummeted – a trend that nearly all analysts see continuing – major coal producers in the United States have been forced to look for other avenues by which to sell their product. The industry states that the United States’ massive coal reserves account for more than a quarter of the entire global supply.

According to a new report released Tuesday by Greenpeace, the United States is currently planning on exporting 190 million additional tonnes of coal a year. “This would add 420 million tonnes of CO2 (carbon dioxide) a year to global emissions before 2020,” the report states, more than all CO2 emissions from fossil fuels in Brazil in 2010.

The report focuses on 14 major new planned oil, gas and coal operations around the world, and warns that, if these go forward, they will add 300 million tonnes of CO2 equivalent to the global atmosphere by 2050.

“That’s why exports have become such a big threat – they’re functioning as a fire exit for some of these companies,” Mitchell says.

“There is a little hypocrisy in this situation. The U.S. is moving forward to reduce emissions while at the same time the federal government is allowing a huge uptick in exports. That means we’re not living up to our responsibility to address the climate problem.”

Attempts to pinch off U.S. coal export have focused on the Pacific Northwest, where several major new proposed coal-export facilities are currently awaiting licensing and official approval at the state and federal level.

“The coal industry is inevitably going to try to find a way to utilise the reserves of coal that they still have, either domestically or internationally, so our goal right now is to work to block these export facilities,” Eitan Bencuya, a communications strategist with the Sierra Club, told IPS.

The public response in opposition to construction of these terminals has reportedly been strong. Environmentalists, health professionals and elected officials in the region have all urged regulators to look at the proposals not in isolation but rather in aggregate, including how construction of the export infrastructure could impact on global carbon emissions.

“This is the power of the grassroots,” Bencuya says. “Thousands and thousands of people are coming together across multiple states to show their opposition to these export facilities, which in turn will help the U.S. keep its coal reserves in the ground. Even if we are able to retire coal plants domestically, simply shipping it abroad and burning it elsewhere is still going to hurt our planet.”