WASHINGTON, Feb 12 2013 (IPS) - For the first time, the U.S. Environmental Protection Agency (EPA) has publicly released a draft plan on how the department’s programmes will adapt to global warming, in a move that could lay additional groundwork for important new emissions rulemaking the agency may announce in coming months. 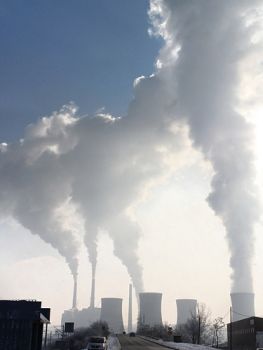 Obama is being urged to set new carbon standards on U.S. power plants, cutting their greenhouse gas emissions by at least a quarter by 2020. Credit: public domain

The EPA is tasked with oversight of the health of both human communities and natural systems, mandated with creating and implementing standards relating to air and water quality, among others. As such, the agency has emerged at the frontlines of Washington’s attempts to push through stricter climate-related regulations while circumventing the U.S. Congress, which remains fractious and politicised over the reality of human responsibility for global warming.

“We’re happy the government is finally waking up to the cold, hard reality of climate change and seeing its impacts,” Elizabeth Perera, a Washington climate policy expert with the Sierra Club, an environment advocacy group, told IPS.

“The more real and specific that you can talk about these impacts, the more we think there will be a fire lit under the government to do something on the action side. On climate change, you have to remember, we’re talking about major costs across all parts of the government and economy.”

The draft plan comes in response to a government-wide requirement, mandated through executive order in 2009 by President Barack Obama, in which this year all U.S. government agencies are required to file climate change-related adaptation plans with a newly created office within the White House, the Council on Environmental Quality.

Each of these plans will now be open to public comment for two months, although the plan by the EPA is expected to garner some of the most significant public scrutiny. According to a five-year plan, adaptation planning is to be integrated across the EPA’s operations by 2015.

The draft plan, although extending to 55 pages, is less a detailed plan of attack than a framework. Yet this framework does cover the EPA’s critical responsibility of writing regulations, and thus could lay down a few markers for what some observers are assuming will be a more aggressive President Obama in his second term.

During his second inaugural address, in late January, the president surprised many by devoting more time – and more forceful rhetoric – to climate change than to nearly any other policy area, despite the issue having received lower priority than several others during his first term.

Notwithstanding the vicious debate and policy paralysis that continues to characterise Washington’s actions on climate change, the EPA clarifies immediately how it plans to approach the issue.

“We live in a world in which the climate is changing,” the draft plan states in its first line (in accordance with a 2011 policy statement). “Changes in climate have occurred since the formation of the planet. But humans are now influencing Earth’s climate and causing it to change in unprecedented ways.”

The EPA’s focus is, of course, primarily on the United States. It notes that during the past half-century average temperatures in the country have been pushed up by more than two degrees Fahrenheit, precipitation has increased by around five percent, and sea level has risen by up to eight inches.

Yet it also notes the broader implications of a warming planet. “Around the world all countries are expected to feel the effects of climate change, although the specific impacts will vary,” the draft states. “The impacts, however, are expected to disproportionately affect developing countries and those already at risk.”

Indeed, even in the United States, poorer and marginalised communities are often at greater risk, the agency warns, recognising that “The impacts of climate change raise environmental justice issues … focus(ing) on the health of and environmental conditions affecting minority, low-income, and indigenous populations.”

As outlined by federal requirements, the draft plan focuses on adaptation to global climate change, rather than on new planning for how to combat or mitigate global warming. Nonetheless, the document makes clear that the realities of climate change – both those that are now certain and those that are yet unclear – will in coming years inform nearly all processes within the EPA, including the writing of new regulations.

Further, the agency’s positioning on the issue of adaptation will almost inevitably be coloured by its potentially central role in the U.S. administration’s plans for combating climate change more broadly over President Obama’s second term.

While the president’s only major legislative effort on the issue – a market-based “emissions trading” bill – failed to make it through the U.S Congress in 2009, many environmentalists today quietly point to noteworthy gains made without Congress’s participation, particularly on new fuel-efficiency requirements the EPA oversaw last year.

With few power dynamics changed in the Congress following the November national election (Democrats continue to hold the Senate while a smaller Republican majority remains in the House), many environment activists are now calling on the president to step up the use of his executive authority to push through rule changes with potentially far-reaching impact.

Officials close to Obama have likewise supported such options, with one noting last week that the administration will “continue to look for tools, administrative actions that we can take that don’t require Congress”.

“This is something within the government’s purview – there are so many aspects they can address for which we don’t need actual legislation,” Sierra Club’s Perera says. “That has to be why they’re moving forward so quickly right now.”

In an open letter sent last month to President Obama, nearly 70 environmental groups called on the White House to “Use your executive authority.” The letter continued: “You have the authority under existing law to achieve urgently needed reductions in the carbon pollution that is disrupting our climate and damaging our health.”

In particular, the signees are urging the president to set new carbon standards on U.S. power plants, cutting their greenhouse gas emissions by at least a quarter by 2020. Such a responsibility would fall to the EPA, which could make a related announcement as soon as April.

Against that prospect, Republican politicians and some business leaders have already begun pushing back. Referring to the agency as “overly zealous”, Representative Ed Whitfield warned last week that “If (the EPA) starts trying to do this with existing plants, they’re going to have a real battle.”

Further, with the EPA’s head having recently stepped down, Senate Republicans are currently vowing to use confirmation hearings for a new agency chief as an opportunity demand a weaker regulatory approach.