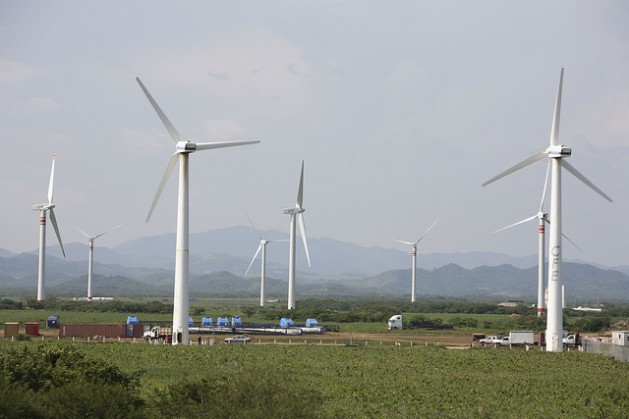 UXBRIDGE, Canada, Feb 25 2013 (IPS) - Green energy is the only way to bring billions of people out of energy poverty and prevent a climate disaster, a new study reveals.

Conservative institutions like the World Bank, the International Energy Agency and accounting giant Price Waterhouse Coopers (PwC) all warn humanity is on a path to climate catastrophe unless fossil fuel energy is replaced by green energy.

The U.N.’s Sustainable Energy for All initiative intends to bring universal access to modern energy, doubling the share of renewable energy globally, and doubling the rate of improvement in energy efficiency by 2030.

Poverty eradication, sustainable development and the transition away from fossil fuel energy go hand in hand.

If those targets are met and similar efforts undertaken to reduce deforestation, then climate disaster can be avoided, said Joeri Rogelj of the Institute for Atmospheric and Climate Science in Zurich  who headed the analysis published Sunday in the journal Nature Climate Change.

The U.N. Sustainable Energy for All (SE4All)  initiative is ambitious, but brings a wide range of benefits including improvements in health, less air pollution and makes the all-important break from increasing fossil fuel energy use. The analysis shows the costs of SE4All is far less than the public subsidies the fossil fuel industry currently receives, he said.

Nearly three billion people still use fire for cooking and heating. Of those, some 1.5 billion people have no access to electricity. For a billion more, their only access is to sporadic and unreliable electricity networks. Indoor air pollution from burning dung, charcoal, and wood for heating and cooking leads to nearly two million premature deaths of women and children every year, more than all the deaths from malaria and tuberculosis.

Dirty fossil fuel energy is also a major health hazard in industrial countries, responsible for 50,000 to 100,000 premature deaths and 400 billion dollars in health costs a year in the U.S. alone, said Mark Jacobson an energy expert at Stanford University in California.

SE4All was first announced in 2009. “Energy interacts with all of the development challenges we face,” Kandeh Yumkella, director-general of the United Nations Industrial Development Organisation told IPS at the launch.

Energy experts calculate that decentralised, off-grid technologies like wind, solar, geothermal and micro-hydro energy generation are the fastest and most cost effective solutions. Extending current electrical grids only makes economic sense to meet 15-20 percent of the need due to the high costs.

SE4All is well under way now, with more than 50 developing countries working on national plans to achieve the three goals of universal access, increasing renewable energy, and doubling the rate of improvement in energy efficiency.

Since 80 percent of human carbon dioxide emissions come from the global energy system, Rogelj and colleagues at the International Institute for Applied Systems Analysis in Laxenberg, Austria wanted to quantify the impact on the global climate.

“Achieving the three SE4ALL objectives could put the world on a path towards global climate protection,” they conclude in their paper “The UN’s ‘Sustainable Energy for All’ initiative is compatible with a warming limit of 2 °C”.

“Doing energy right will promote the Millennium Development Goals, such as poverty eradication and social empowerment, and at the same time kick-start the transition to a lower-carbon economy,” says IIASA researcher David McCollum, who also worked on the study.

“But the U.N.’s objectives must be complemented by a global agreement on controlling greenhouse gas emissions.”

Even if the targets are achieved, explosive economic growth coupled with greater energy use will overwhelm the climate protection benefits of SE4All. “There is an explicit need for a global cap on emissions,” said Rogelj .

Global carbon emissions were about 52 gigatonnes (billion metric tonnes) in 2012 and that means fossil fuel energy use must decline so emissions are about 41-47 Gt by 2020 to have a reasonable chance of keeping global warming below two degrees C.

Stanford’s Jackobson, among others, have proposed detailed plans on how to meet 100 percent of the world’s energy needs with green energy. Jacobson believes it could be done as soon as 2030.

Fossil fuel emission reductions will have to continue after 2030 and eventually decline to near zero in order to stay below two degrees C, said Rogelj.