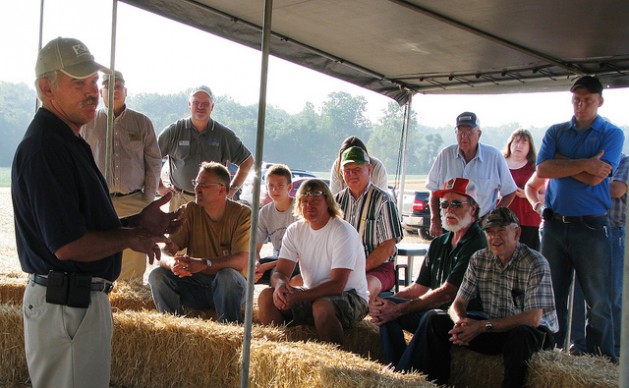 Agriculture Under Secretary for Farm and Foreign Agriculture Service (FFAS) Michael Scuse (left) speaks to farmers about the drought conditions being felt across the country. Credit: USDA photo by Jacob Maxwell

WASHINGTON, Feb 15 2013 (IPS) - For the first time, a U.S. government auditor has added climate change to a list of issues that pose the greatest financial risk to the government and country. It is also warning that Washington is markedly unprepared to deal with the scope of the problem.

The admonitions, coming amidst a newly strengthened public discussion here on climate change, could offer an opportunity for some conservative lawmakers to re-engage with what has been one of the most fractious political issues of recent years.

“(T)he impacts and costliness of weather disasters will increase in significance as what are considered ‘rare’ events become more common and intense due to climate change,” a new report by the Government Accountability Office (GAO) warns. “However, the federal government is not well positioned to address this fiscal exposure.”

As usual, this issue has bubbled up from the local level, and now the federal government has put its imprimatur on it.

According to the GAO, the federal government’s primary financial watchdog, its “high risk” list currently includes 30 issues, covering concerns of efficiency, effectiveness or fraud, with a particular focus on defence and health systems. However, this year’s inclusion of the financial risk to the government posed by the effects of climate change has the possibility to outweigh much of the rest of the list combined.

“This is of great significance, and follows trends already taking place in the private sector and local government,” Keith Gaby, communications director for climate change with the Environmental Defense Fund (EDF), an advocacy group, told IPS. “As usual, this issue has bubbled up from the local level, and now the federal government has put its imprimatur on it.”

In part, the federal government’s financial exposure is so great because Washington directly oversees such a massive swath of land – some 650 million acres, nearly 30 percent of the entire country. That’s a huge amount of infrastructure – including that meant to safeguard human communities – that could be endangered by unforeseen or dramatic changes to weather systems.

In addition, the government operates two huge insurance schemes that could be particularly stretched, covering flood damage and crops. The GAO warns that these remain based on decades-old conditions and approaches.

The issue that will most readily catch the eye of legislators is how the government’s aid responsibilities following major disasters have been increasingly called upon in recent years. This is a particular concern given that the federal government’s annual budgets do not include specific allocations for such aid.

The GAO reports that disaster declarations have steadily increased to a record 98 in 2011, compared with 65 in 2004, requiring a total 80 billion dollars during that period. Further, this figure was nearly equalled by the single request, late last year, for more than 60 billion dollars in response to Superstorm Sandy, the hurricane that ravaged much of the country’s northeast.

That storm, coupled with a severe drought last summer and strong mention of climate issues in recent weeks by President Barack Obama, has led to a sudden strengthening of the public discussion here.

“Climate is clearly back on the political agenda in major way,” Jamie Henn, communications director for 350.org, an environment advocacy group organising a major Washington rally on Sunday, told IPS.

“This report strongly underlines key points that we’ve been making about the risks of climate change and the country’s continued reliance on fossil fuels. The White House has made it clear it doesn’t yet have a full agenda, so it’s still open for input – and that’s what we’ll be providing on Sunday.”

While Washington has engaged in nascent adaptation activities regarding the effects of climate change, the GAO auditors warn these efforts remain merely “ad hoc”. That is almost surely a result of the politicisation of climate change here, which has led to almost complete legislative paralysis on the issue.

In this case, the GAO refuses to weigh in on the politics – or human causes – of global warming.

Yet it is clear that the auditors feel that “adaptation” requirements should include policy actions for cutting greenhouse gas emissions and other causes of global warming. For instance, they prominently reference findings by two other U.S. government offices that “the nation’s vulnerability can be reduced by limiting the magnitude of climate change through actions to limit greenhouse gas emissions.”

The decision to focus on the effects – and economics – rather than the causes of climate change could now offer ideological cover for some conservatives to engage constructively on the climate discussion.

“This clearly opens up the conversation between people who are worried about expenditures and future deficits and those working directly on climate change, as well as those focused on energy issues and local politicians across the country,” EDF’s Gaby says.

“Particularly due to the money spent on Sandy, the deficit hawks are waking up and saying we have to deal with this. They’re not changing their base position on climate change, but they are engaging with the issue in a way that could bring the conversation forward.”

This approach has already reaped some political rewards. Appearing at the new report’s launch on Thursday, the Republican head of the House of Representatives’ primary investigative committee offered strong report for the GAO findings.

“We in the federal government must do oversight about how you mitigate what nature either has been doing to us or may do to us, and I think that’s a non-partisan issue,” Representative Darrell Issa stated.

“I hope that all members of Congress on both sides of this issue recognise that it’s really not about where you are on climate change … it’s really about recognising that Congress has not adjusted for the amount of money we’re paying out.”

The bill – which the head of the Senate’s environment committee, Senator Barbara Boxer, described as the “gold standard” on the issue – is extremely ambitious. It includes what would be a highly contentious carbon tax, the revenues from which would be ploughed back into renewable energy and efficiency.

While Senator Sanders admits his bill has almost no prospect of being adopted, he says its details are meant to add specific policy proposals to a public discussion that has ramped up significantly in recent weeks. Senator Boxer has pledged to move the legislation through her committee by the summer.