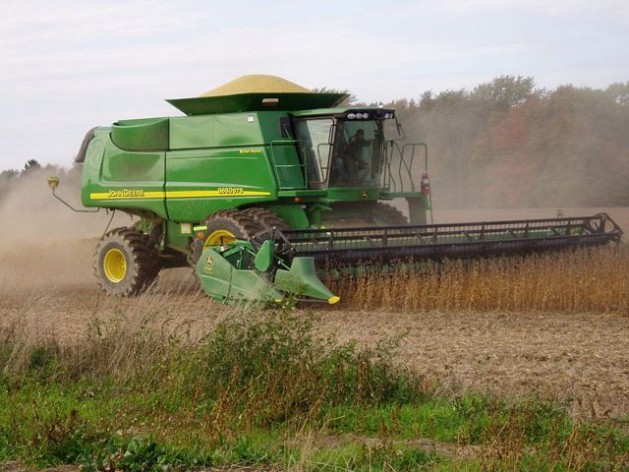 A soybean harvest in the state of Michigan. Between 2006 and 2011, U.S. farmers converted more than 1.3 million acres of grassland into corn and soybean fields. Credit: public domain

WASHINGTON, Feb 23 2013 (IPS) - The rush for biofuels in the United States has seen farmers converting the United States’ prairie lands to farms at rates comparable with deforestation levels in Brazil, Malaysia and Indonesia – rates not seen here since the Dust Bowl of the 1930s.

A new study finds that, between 2006 and 2011, U.S. farmers converted more than 1.3 million acres of grassland into corn and soybean fields. Driven by high crop prices, biofuel subsidies and a confluence of other factors, states like Iowa and South Dakota have been turning some five percent of prairie into cropland each year, according to the report’s authors, Christopher Wright and Michael Wimberly of South Dakota State University.

The researchers suggest that farmers are growing crops on increasingly marginal land, in part because the federal government offers subsidised crop insurance in case of failure. In Nebraska, North Dakota and South Dakota, for instance, corn and soy are planted in areas that are especially vulnerable to drought.

Numerous incentives have encouraged the ploughing of grasslands. The federal system of financial payments to grain farmers has long encouraged conversion of grasslands to farms, but in recent years new subsidies for corn ethanol and other biofuel production have significantly stepped up this inducement.

The resulting increase in crop prices encourages the owners of livestock to plough prairieland in order to grow crops in favour of using that land for grazing. This has lead to the growth of industrial farms and industrial confinement methods for meat production, while genetically modified seeds now allow corn and soy production in semiarid regions that before were suitable only for ranching.

According to the new research, farmers are increasingly willing to take that risk because corn and soy have become so lucrative. Further, the study finds evidence that many farmers are no longer enticed by federal conservation programmes that pay for grassland cover.

“If a lot of farmers didn’t have this support, they wouldn’t choose to produce on this land, because it is quite marginal and risky for them. But when they’re getting a 65 to 80 percent subsidy on their crop insurance premium, the risk is dramatically reduced because it has already a built-in revenue guarantee subsidised by the American taxpayer.”

While recent years have subsequently seen a shifting of risk from producer to taxpayer, Fogel warns that the latter will end up being forced to pay twice, “when we later have to pay for a conservation programme to rehabilitate and protect the destruction done to the environment on the back end.”

The loss of pasture itself could also have significant environmental impacts. According to conservationists in the Midwest, the United States’ prairie lands should be seen as a vast “carbon ocean”, with an enormous capacity to reduce climate change by sequestering heat-trapping carbon from the atmosphere.

“Native grasses are a stable repository of carbon, creating organic carbon below ground, much as trees create it above,” said John Davidson, a professor emeritus of law at the University of South Dakota.

“Grasses store carbon quickly, providing an immediate mitigation against global warming, and the carbon is stored safely underground, secure it from catastrophic events such as fire. However, ploughing releases that carbon, adding significantly to greenhouse gas concentrations while eliminating habitat used by hundreds of species.”

Indeed, an area covering the five northern states of the Midwest contains thousands of shallow wetlands and is one of the continent’s largest breeding grounds for ducks and other ground-nesting birds and waterfowl. But cornfields are now encroaching on this habitat, with wetlands disappearing and bird populations dropping.

Davidson is urging a public discussion on whether it makes sense to spend large amounts of money on attempts to control the release of carbon from coal-fired power plants and the cutting of tropical forests “while simultaneously releasing an immeasurable ocean of carbon by ploughing up our prairie”.

Further, a 2008 paper in the journal Science argued that fuels like corn ethanol and soy biodiesel lose a portion of their carbon advantage over gasoline if farmers are simply digging up virgin grassland to grow the crops.

Environmental groups and policymakers are currently pushing initiatives to ensure that federal farm and crop insurance subsidies do not exacerbate the loss of these vital natural resources. A bipartisan group of members of the House of Representatives recently introduced legislation that would create a nationwide “sodsaver” law that would slash subsidies that contribute to the destruction of native grassland and prairie.

This would dramatically lower the amount of money the government provides for native grasslands that have been recently ploughed. This doesn’t mean that farmers can’t keep farming, just that they won’t have as much of an incentive to convert prairieland to agricultural land.

The Protect Our Prairies Act, a provision of the 2013 Farm Bill, which was passed by the Senate in June 2012, would prohibit federal payments and reduce crop insurance premium subsidies by 50 percent on newly broken native sod. The bill would also close loopholes by requiring that newly converted prairieland be isolated from other crop acres when calculating insurable yields.

Proponents say these two provisions are crucial to removing the federally subsidised incentive to move agricultural operations into native grasslands. The bill would also save an estimated 200 million dollars over a decade, while ensuring that taxpayer dollars do not continue to facilitate the destruction of prairielands.

“As the House of Representatives begins developing its version of the Farm Bill, we will work to ensure that chamber does not make the same deep cuts to conservation,” said Jamie Rappaport Clark, president of Defenders of Wildlife, in a statement.

“And we will fight to make sure the House also requires farmers who receive subsidies to take appropriate measures to protect our lands, water and wildlife, as the Senate has done. We simply must find a way to provide a crop insurance safety net for farmers that doesn’t also encourage the widespread destruction of wetlands, forests, grasslands and America’s waters.”