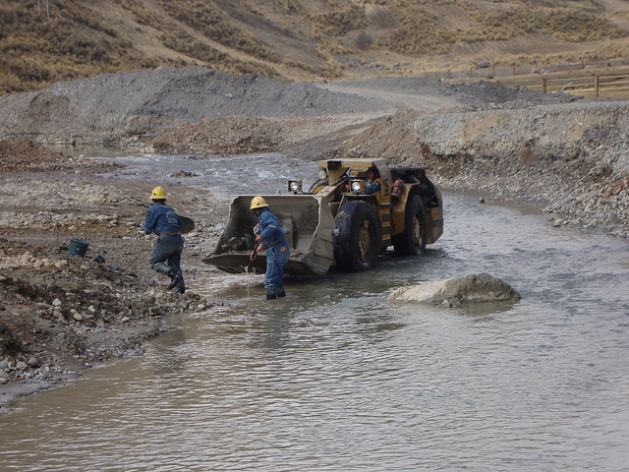 WASHINGTON, Mar 26 2013 (IPS) - Researchers have unveiled new data warning that governments in Latin America are infringing on the rights of their indigenous populations in a bid to fuel development through the extraction of natural resources.

The Rights and Resources Initiative (RRI), a Washington-based organisation, says it has documented a “natural resources giveaway” in Latin America, which highlights how an outdated development model is trampling on human rights and the environment throughout much of the region.

Governments are at a pivot point. Will they pursue massive resource extraction at any cost or create a detailed and regulated development plan?

“Without recognition of local rights, transparency of deals and decisions, and mechanisms to ensure accountability of governments and investors, there will be a rollback of environmental, human and tenure rights of forest communities,” Omaira Bolanos, RRI’s programme director for Latin America, told IPS from Bogota.

“Foreign investors prefer countries with weakened regulations to expand their investments. So, governments, citizens, civil society and businesspeople must work together to address the risks and opportunities of advancing the economic development and prosperity of all Latin Americans.”

She added: “But this must be done without harming the human and tenure rights of rural, indigenous and Afro-descendant communities.”

A new study from RRI (available in Spanish here) finds that even while some governments in Latin America are increasingly looking to natural resources extraction to fuel their economic development, several are paying scant attention to the impact of mining, oil exploration and other activities on the environment or local landowners.

Margarita Florez, executive director at Asociación Ambiente y Sociedad, an environmental and human rights group in Colombia, analyses the impacts of the extractive industries on the collective land and forest rights of people and communities in Colombia, Peru, Guatemala and Panama.

Florez writes that the mining activities in those countries increased in intensity and range over the last two decades, particularly focusing on lands owned by indigenous and Afro-descendant communities.

“A lot of the real impacts aren’t coming to light,” Augusta Molnar, director for country and regional programmes at RRI, told IPS.

“Governments think they can dramatically expand mining or petroleum exploration in their countries because it is a small percent of the total land area and, therefore, they believe the environmental impact will be small – despite the fact that 90 to 100 percent of these areas are in the middle of forests and indigenous lands. So in fact, the impacts are quite massive.”

All four countries, for instance, reported destruction to vital water sources for indigenous communities, due to the very high water demand for mining operations.

In each of these four countries, foreign direct investment (FDI) was found to be focused mainly on the extractives sector. In Colombia, for example, oil and mining investment accounted for 92 percent of FDI in 2011 – around 13.2 billion dollars.

FDI also increased in these sectors in Guatemala, Peru and Panama. Indeed, the states evidently competed to attract FDI, often reducing or eliminating restrictions or regulations in order to attract companies.

In addition, the report says little consultation appears to be taking place between affected communities and governments – let alone with the private mining companies. This sets the stage for conflict and creates precedents that undermine both legal and governance issues at the national level.

“Broadly, we found that the institutions are not in place at the state level to oversee the environment impact assessments and their implementation. There is not a broad set of standards for prior consent, and there is a prevailing assumption that a set of consultations have been carried out when in reality there is no mechanism in place for oversight.”

Opposition movements have attempted to push back, but these have been countered by government efforts to paint indigenous communities as obstacles to eagerly awaited progress.

“If you fully recognise a people’s rights, than the engagement with these peoples and decisions to go ahead with an investment make them very much in the middle of negotiations between the companies and the state,” Florez writes.

“This will require the state to be much more accountable. We know that indigenous people are very important actors in managing forests and living in harmony with forests. We also know that poverty increases if you don’t work with these local people.”

She continues, “A company cannot just collect revenues and expect the local economy is going to grow. There needs to be a balanced development.”

In 2011, James Anaya, the U.N. Special Rapporteur on the Rights of Indigenous Peoples, published a report questioning the current development model in much of Latin America. The idea that the extraction of natural resources leads to progress, Anaya stated at the time, constitutes a violation of indigenous peoples’ cultural, social, environmental and economic rights.

Florez furthers this line of inquiry. For instance, she highlights an inequitable distribution of royalties garnered from the exploitation of the region’s non-renewable natural resources, and finds that this money has failed to translate into greater well-being for local communities.

Over the weekend in Bogota, representatives from the four governments, including leaders from indigenous and Afro-descendant groups, gathered to discuss the effects of resource extraction on nearby communities. According to Molnar, both the government and indigenous representatives were happy to be able to talk face to face.

“We hope this demonstrates that the governments are at a pivot point,” she says. “Will they pursue massive resource extraction at any cost or create a detailed and regulated development plan?”

According to Melissa Blue Sky, project attorney with the Washington-based Centre for International and Environmental Law (CIEL), it is a precedent that is gaining force. A consultation law just came into force last year in Peru, and other Latin American countries are creating similar national laws.

“An increased level of dialogue and an effort to protect the rights of indigenous peoples is being seen in Latin America as more countries are beginning to implement national consultation laws,” she told IPS.