LIMA, Jan 27 2011 (IPS) - A legislative bill in Peru aims to channel the fines for environmental crimes to repair the damages to rivers, soils and other public goods that directly affect the population. Until now, the fines collected have ended up elsewhere in the government. 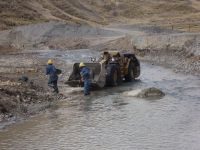 “The money would have to go to the area where the offence occurred. That’s common sense,” environmental public prosecutor Julio Guzmán told Tierramérica. He is the author of the bill that aims “to resolve one aspect of the environmental problem.”

The draft law proposes that the funds obtained through economic reparations go to an account of the Ministry of Environment. From there, the money would be distributed to the institutions entrusted with protecting the country’s environment.

“What happens now is that the money goes to the Treasury, and in the following national budget is distributed without regard to its origin,” he said.

Guzmán will present the bill in February to the Ministry of Environment as one of the tools it is seeking to better manage Peru’s environmental issues.

The General Law on Environment No. 28611 states in Article 147 that the fines paid for environmental damage “will be designated for carrying out actions that compensate the interests of those affected or contribute to achieving the constitutional objectives with respect to the environment and natural resources.”

However, Guzmán pointed out, that article “doesn’t have the power of a mandate.”

“The problem is that this norm is a dead letter and is not applied,” said attorney José Luis Capella, of the non-governmental Peruvian Environmental Law Society. “The Public Prosecutor is right to define the mechanisms so that it can be executed,” he told Tierramérica.

The Ministry’s Public Prosecutor Specialised in Environmental Crimes has existed since June 2010 to defend the government’s interests.

Prior to that, prosecutors from different institutions of the Executive branch were responsible for such cases, but often were unable to provide adequate follow up when specialised knowledge of technical aspects was required.

Currently, the Ministry of Environment’s Public Prosecutor’s Office has more than 2,140 cases against companies and individuals for serious environmental crimes.

Around 60 percent of the claims presented so far involve forested areas, followed by industrial contamination, and then mining and oil drilling activity.

The lawsuits involve representatives from more than 100 companies. But undoubtedly the majority of the claims fall on the local residents — with more than 2,000 cases. There are 450 investigations into cases against informal miners and nine against major mining firms, including the Antamina, Shougang and Caudalosa companies.

Antamina, a partnership involving the British-Swiss mining company Xstrata, the Australian-Dutch BHP Billiton, Canada’s Teck and Japan’s Mitsubishi Corporation, is under investigation for lead contamination found in the blood of residents of Juprog and Ayash, in the Andean region of Ancash. The company allegedly failed to appropriately manage its tailing basins.

The Ancash case had been shelved, but the Public Prosecutor filed an appeal, based on a law stating that crimes against health cannot be left unpunished.

Meanwhile, the Chinese company Shougang is being investigated on charges of surpassing the permissible limits of toxic agents in its mining operations. The Peruvian firm Caudalosa must answer for the 25,000 cubic-metre spill of wastewater that affected several rivers in the Andean region of Huancavelica — among the poorest in Peru.

“The idea is to improve the identification of those responsible for environmental crimes, which historically have not been penalised,” said Guzmán.

But there are obstacles. Twenty percent of the more than 2,000 lawsuits remain in the preliminary investigation phase in the prosecutors’ offices.

“The problem is that the courts often do not consider environmental crimes as serious issues that directly affect people, and opt not to penalise those responsible, or do not adequately review the evidence,” he said.

In the cases that have been resolved, several judges have decided to suspend the penalties, as occurred in a lawsuit against a resident for misappropriation of land in the Pómac Forest Historic Sanctuary, in the northern region of Lambayeque.

“Many judges consider these crimes as misdemeanours, so they set punishment of one or two years, without prison time. The problem is the weak interpretation of the laws that penalise these crimes,” said attorney Capella.

Public prosecutor Guzmán stressed the need to educate investigators and judges about the environmental issues, and increase awareness that these crimes do not just affect the landscape, but also violate people’s rights and harm human health.

One important step was the creation of 29 prosecutor’s offices specialising in environmental issues.

Meanwhile, there are many residents of areas affected by environmental crimes who are demanding that the government also set aside a portion of the fines collected for individual compensation.

Guzmán said the residents should work with attorneys of the Justice Ministry to demand their rights, and noted that one way the local population benefits from the reparations is the clean-up of water sources and soil that are vital for their communities.