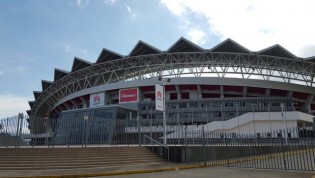 By Marcela Valente
South America has managed to withstand the knock-on effects of recession in the EU and U.S. thanks to the protection offered by the soaring Asian demand for commodities. But many things could change in the medium term.

By IPS Correspondents
Whether the world’s largest open-cut mine on this island territory of Papua New Guinea (PNG) will resume copper and gold production, after being mothballed for 22 years, will depend on how satisfied matrilineal landowners are with the proposals.

By Mario Osava
Despite challenges like high interest rates and high household electricity tariffs, the Brazilian economy has been growing at the highest rates seen in decades. Another problem that, although it has not stood in the way of growth, must be overcome is the costly use of roads for transporting farm products – an issue that is being addressed by the expansion of railway networks.

By Danilo Valladares
"We started out with 10 organisations and now we have 22 cooperatives with more than 19,000 members who grow and export crops with an environmental, social and economic focus," says an enthusiastic Marvin López, with the Guatemalan network of small-scale fair trade farmers (CGCJ).

By IPS Correspondents
As the date for South Sudan’s long anticipated Jul. 9 secession inches closer, on-going violence in the Northern state of South Kordofan threatens to destroy the country’s hopes for peace.

By Julio Godoy
The high economic growth enjoyed by many African states during the 2000s have not led to poverty elimination. This is because the growth did not happen in the sectors where poor people work, as in agriculture, or in the rural areas where poor people live, or simply did not involve labour provided by poor people.

By Peter Custers
The alarm bells this time are not being rung by climate scientists or by environmental activists. They are being rung by none other than the International Energy Agency (IEA) - the institution established in the 1970s to defend the interests of Western oil consuming nations.

By Fabiana Frayssinet
The same day that the lower house of the Brazilian Congress approved a reform of the forestry code that would make it easier to clear land in the Amazon jungle for agriculture, a husband and wife team of activists who spent years fighting illegal deforestation in the rainforest were murdered.

By Isolda Agazzi
Some of the decisions taken on trade in the Istanbul Plan of Action are likely to disadvantage poor countries while others are so vague as to be meaningless, says Abdoulaye Sanoko, counsellor at the mission of Mali to the World Trade Organisation (WTO) in Geneva.

By Marcela Valente
Food shortages may be causing hunger in the developing world, but the large Latin American agricultural countries that belong to the Group of 20 (G20) see the situation as an opportunity to exploit.

Pension Fund Investors May be to Blame for Escalating Food Prices

By Isolda Agazzi
Long-term investors like pension funds are probably the reason why the prices of commodities, including crops, have been driven to a higher level than in 2008 when food riots erupted in 30 countries, according to the British nongovernmental organisation Christian Aid.

A Sugar Boost for the Cuban Economy

By Patricia Grogg
Cuba hopes to revive its sugar industry as part of the recently announced economic changes and take advantage of good international prices for what was once the Caribbean island’s main export.
Next Page »
ADVERTISEMENT ADVERTISEMENT