RIO DE JANEIRO, May 25 2011 (IPS) - The same day that the lower house of the Brazilian Congress approved a reform of the forestry code that would make it easier to clear land in the Amazon jungle for agriculture, a husband and wife team of activists who spent years fighting illegal deforestation in the rainforest were murdered. 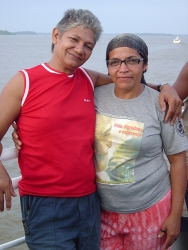 After several delays, the revised forest code was approved by the Chamber of Deputies late Tuesday, by a vote of 410 to 63, with one abstention.

Introduced by Communist Party lawmaker Aldo Rebelo, the reform of the 1965 forestry code is, in the view of environmentalists, the first major defeat for President Dilma Rousseff, as the parties allied with her left-wing Workers’ Party did not vote in a bloc with it on this question.

“It’s a law that looks to the past, not the future,” WWF-Brazil’s conservation director Carlos Alberto de Mattos Scaramuzza told IPS.

If the revised forest code is approved by the Senate and signed into law by Rousseff, it will make it impossible for Brazil to meet its greenhouse gas reduction targets, do Valle said.

The new code would grant an amnesty on fines to landowners who illegally chopped down forest on their property, as long as the deforestation took place before July 2008 and the farm is 400 hectares or less in size.

The new law on land use would also reduce the amount of forest that farmers must preserve, while allowing them to cut trees along rivers and on hilltops and hillsides. It would also retroactively legalise the clearing of land that is used for agricultural purposes, tree plantations, or rural and eco-tourism, if it was deforested before July 2008.

Rousseff has threatened to veto the amnesty portion of the law.

The vote symbolically coincided with the shooting deaths of José Cláudio Ribeiro da Silva, 52, and Maria do Espírito Santo, 51, leaders of the Projeto de Assentamento Agroextrativista Praialta Piranheira, a nature reserve where they had worked for 24 years, fighting illegal deforestation for charcoal production and cattle-raising.

Their family said they were ambushed on Tuesday morning by gunmen in the municipality of Nova Ipixuna in the northern Amazon state of Pará. The two environmentalist farmers had received death threats for their activism against illegal tree felling in the area.

“Brazil woke up to the news of the murders of two leading environmental activists, and it’s going to bed with the murder of the forest code,” Greenpeace Brazil ecologist Paulo Adario told the press.

In its current form, the forest code sets out how much of their land farmers can clear. Eighty percent of the forest must be left intact on property in the Amazon jungle, 35 percent in tropical savannah zones within what is known as the “legal Amazon” – which encompasses the nine Brazilian states partially or totally covered by rainforest – and 20 percent in the rest of the country.

But the law is not enforced. Rebelo argues that the amnesty on fines would make it possible to legalise 90 percent of rural properties that are in violation of the regulations.

“This is a victory for Congress. The current forest code carries the logo of NGOs, but this one has Brazil’s logo,” said Senator Kátia Abreu, the chairwoman of the powerful Brazilian Confederation of Agriculture (CNA), who said the new revised code would put “an end to legal insecurity in the countryside.”

A total of 700,000 hectares were deforested in Brazil’s Amazon jungle in 2009 and 2010, the lowest level of destruction since records on deforestation began to be kept in 1988.

But a government report whose preliminary results were released on May 19 stated that from August 2010 to April 2011, deforestation rose 27 percent with respect to the same period the year before, with the destruction especially concentrated in the soy-growing western state of Mato Grosso – a phenomenon that the government blames on expectations that an amnesty would be approved.

WWF-Brazil’s Scaramuzza pointed out that the agriculture lobby is pushing hard for more flexible forest legislation against a backdrop of soaring commodity prices. Brazil is one of the world’s largest exporters of soybean, coffee, orange juice, beef, poultry and other key farm products.

In Mato Grosso, soy earnings rose nearly 100 percent in a year, he said. That represents annual profits of one million reals (more than 600,000 dollars) for a 1,000-hectare farm, “which not only lets them buy new pickup trucks, but also pushes them to continue to deforest,” he added.

The activist said the amnesty, the rising profits and the fact that government monitoring and control of deforestation, although it has increased, still falls short, make “an explosive combination.”

“How can a country that aims to be a leader in the fight against climate change and that will host the next Rio+20 (Earth Summit 2012) do such poor homework?” he asked.

The revised forestry code could also end up transferring to provincial and municipal governments the authority to grant environmental permits to agricultural properties, which would weaken “the state’s oversight and control mechanisms” and make it easier for farmers who break the law to evade punishment like foreclosure, the seizure of profits from sales of illegally cultivated products, or the cancellation of loans, Greenpeace Amazon campaign activist Marcio Astrini told IPS.

“But the whole world will lose out, because Brazil is a major emitter of greenhouse gases and will not meet its goal” of cutting emissions by between 36 and 38.9 percent from projected 2020 levels, do Valle said.

If the legislation passes the Senate, the winner will be “the most backwards sector of agribusiness, which does not want to invest a thing towards meeting minimum standards of sustainability,” he said.

Astrini noted that at least 15 legislators would benefit from the amnesty because they are landowners who owe huge environmental fines – not to mention those who have received campaign donations from agribusiness.

Furthermore, “Brazil has international commitments to avoid expanding soy and beef production at the expense of deforestation. A law that encourages cutting down trees would jeopardise these commitments,” Astrini added.

Scaramuzza said the vote on the forest code and the murder of the environmentalists “are both along the same lines.”

“Things have improved a great deal in the last few years” in Brazil, but the state still does not have a presence in remote regions like the Amazon jungle area where the two rural activists were killed, and it has not created incentives for modern agricultural techniques that combine high yields with the conservation of natural resources, he said.