In this column, Roberto Azevêdo, sixth Director-General of the World Trade Organization (WTO), writes that the continuing increase in the G20’s stock of new trade-restrictive measures since the financial crisis of 2008 remains of concern in the context of an uncertain global economic outlook; individually and collectively, he says, the G20 must show leadership and refrain from implementing new measures taken for protectionist purposes while removing existing ones.

GENEVA, Jun 29 2015 (IPS) - The latest report by the World Trade Organisation (WTO) on G20 trade measures shows a slight deceleration in the application of new trade-restrictive measures by G20 economies, with the average number of such measures applied per month lower than at any time since 2013.

According to the thirteenth such WTO report, issued on Jun. 15, G20 economies had applied 119 new trade-restrictive measures since mid-October 2014, an average of 17 new measures per month over the period. 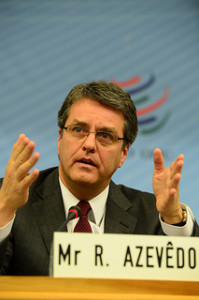 A slight decrease in the number of trade remedy investigations by G20 economies has also contributed to this overall figure.

But it is not yet clear that this deceleration will continue and the WTO calls on G20 leaders to show continued vigilance and reinforced determination towards eliminating existing trade restrictions.

The longer term trend remains one of concern, with the overall stock of trade-restrictive measures introduced by G20 economies since 2008 continuing to rise.

Of the 1,360 restrictions recorded by this exercise since 2008, less than one-quarter have been eliminated, leaving the total number of restrictive measures still in place at 1,031. Therefore, despite the G20 pledge to roll back any new protectionist measures, the stock of these measures has risen by over seven percent since the last report.

The broader international economic context also supports the need for continuing vigilance and action. According to the WTO’s most recent forecast (14 April 2015), growth in the volume of world merchandise trade should increase from 2.8 percent in 2014 to 3.3% percent 2015 and further to four percent in 2016, but remaining below historical averages.

“The longer term trend [vis-à-vis protectionism] remains one of concern, with the overall stock of trade-restrictive measures introduced by G20 economies since 2008 continuing to rise”

The overall response to the 2008 financial crisis has been more muted than expected when compared with previous crises. The multilateral trading system has proved an effective backstop against protectionism.

During this period, G20 economies also continued to adopt measures aimed at facilitating trade, both temporary and permanent in nature.

These developments confirm that G20 economies overall have shown a degree of restraint in introducing new trade restrictions. However, it is not yet clear that the deceleration in the number of measures introduced will continue in future reporting periods. It is also relevant that the slow pace of removal of previous restrictions means that the overall stock of restrictive measures is continuing to increase.

Trends in world trade and output have remained mixed since the last monitoring report, as merchandise trade volumes and GDP growth picked up in the second half of 2014 but appear to have slowed in the first quarter of 2015.

Economic activity remained uneven across countries as the United States and China slowed in the first quarter, while growth in the Euro area and Japan picked up.

Lower prices for oil and other primary commodities were expected to provide a boost to importing economies, but reduced export revenues weighed heavily on commodity exporters.

In light of these developments, our most recent forecast (14 April 2015) predicted a continued moderate expansion of trade in 2015 and 2016, although the pace of recovery was expected to remain below historical averages.

This report shows that G20 economies implemented 48 new general economic support measures during the period under review, with the majority targeting the manufacturing and agricultural sectors through various incentive schemes, often, but not exclusively, in the context of exports.

The overall assessment of this thirteenth report on G20 trade measures is that the continuing
increase in the stock of new trade-restrictive measures recorded since 2008 remains of concern in the context of an uncertain global economic outlook.

Individually and collectively, the G20 must show leadership and deliver on the pledge to refrain from implementing new measures taken for protectionist purposes and to remove existing ones. (END/COLUMNIST SERVICE)