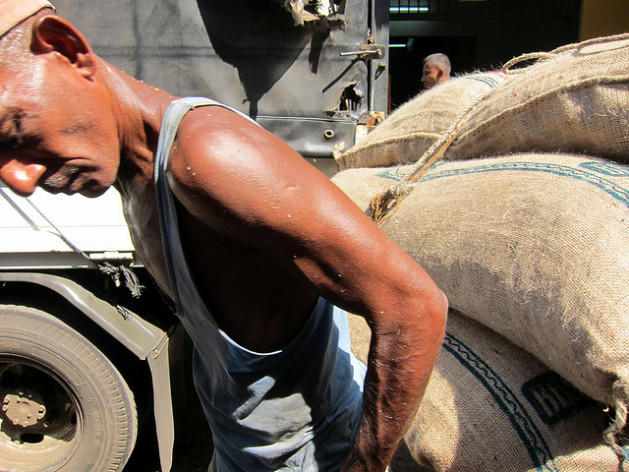 Critics say says the plight of the workers is part of a larger systemic problem, including one overseen by Washington. Credit: Indi Samarajiva/cc by 2.0

NEW YORK/WASHINGTON, Mar 19 2013 (IPS) - A spate of legal battles in the southern state of Louisiana has shed new light on the unfair recruitment and employment practices of Filipino guest workers at several companies in the United States.

On Monday, a federal judge awarded nearly 4.5 million dollars to 347 Filipinos after finding that a Los Angeles company had lured them into slave labour, working as teachers in Louisiana public schools.

The exploitative immigration system of the U.S. works hand-in-hand with the corrupt labour export policy of the Philippines.

The decision comes as more than 100 Filipino workers at a shipyard in the New Orleans area are alleging that they suffered discriminatory treatment, threats and abuse at the hands of their recruiters and employer, and have joined a class action lawsuit.

The shipyard, Grand Isle Shipyard (GIS), put the Filipinos to work on an oil production platform owned by Black Elk Energy, a U.S. company that, according to federal regulators, had racked up 315 documented “incidents of safety non-compliance” offshore since 2010.

The problems at Black Elk Energy were amplified following an explosion in November on a platform in the Gulf of Mexico that claimed the lives of three Filipino workers, while three others were seriously injured.

The incident brought increased attention to the practice of U.S. companies hiring foreign guest workers for potentially hazardous jobs – and the exploitation that can come with such arrangements.

According to BAYAN USA, a coalition of progressive U.S.-based Filipino organisations, U.S. guest worker programmes have historically bound workers to one employer at a time, making them susceptible to exploitation. The list of grievances filed against the Grand Isle Shipyard range from wage theft, unlawful deductions and theft of tax refunds to labour abuse, discrimination and unsafe working conditions.

“The main [hazardous condition] is the sleep deprivation that they experience – just long hours of work that the [U.S.] workers don’t face,” Josef Calugay, a member of Katarungan, an advocacy organisation based in Washington, told IPS. “They’re forced to work sometimes for two weeks straight, 70 hours a week.”

According to BAYAN, Filipino welders, pipefitters and scaffolders were trafficked under “fraudulent” contracts that promised high pay and safe working conditions. But many were placed for work on dangerous oil rig platforms.

By that time, former GIS workers “were already gearing up for the campaign [and lawsuit], but the explosion sort of fast-tracked everything,” Calugay says. After the November explosion, he notes, more GIS ex-employees gained confidence to speak out against the company.

The media dug into working conditions on the oil rig. A local television reporter, for instance, launched an investigative report that captured testimonials of abuse and detailed a complicated web of private contractors associated with GIS.

The Philippine government has long lauded the fact that, every day, some 4,500 Filipinos are sent abroad to work. The remittances they send back keeps the Philippine economy afloat.

But the Filipino community and diaspora are increasingly questioning why the Manila government continues to support such a strategy for development.

“The government doesn’t seem to provide any protection when these overseas Filipino workers run into distress,” Calugay says. “Yet this labour export policy is still one of their pillars of development – pushing people to other countries instead of addressing poverty or lack of jobs at home.”

Yet Jackelyn Mariano, deputy secretary-general of BAYAN USA, says the plight of the workers is part of a larger systemic problem, including one overseen by Washington.

“The exploitative immigration system of the U.S. works hand-in-hand with the corrupt labour export policy of the Philippines to maintain a steadily increasing flow of cheap, temporary migrant labour,” she said in a recent press release.

Indeed, there are relatively few regulations regarding foreign worker recruitment practices here. Many of these workers have already incurred substantial debt just to get these jobs, and this inevitably puts them in compromising situations – particularly if they encounter poor working conditions of any kind.

U.S. immigration policy allows these workers to work only for whatever employer who sponsored their visa.

“Their options are to pretty much to stick it out with the employer – who may not be paying them properly or exposing them to dangerous working conditions – or to go home,” Jim Knoepp, the deputy legal director for the Immigrant Justice Project at the Southern Poverty Law Centre, in Montgomery, Louisiana, told IPS.

“But they are often in such massive debt from the recruiters that they cannot go without first earning the money to pay off those debts first, so it puts them in a really difficult position.”

Such a situation provides employers with a near exemption from the normal supply and demand of the labour market, Knoepp says.

Filipino activists are now calling for the resignation of the Filipino ambassador to the United States, and demanding a policy overhaul that would put an end to the exploitation of guest workers.

In late February, a fact-finding mission sponsored by the National Alliance of Filipino Concerns (NAFCON), Bayan USA and the Southern Poverty Law Centre took place in Louisiana as part of the Justice for the Grand Isle Shipyard Filipino Workers campaign. At that time, those on the mission learned that GIS had filed a motion of contempt against the Filipino ex-workers, which prevents the labourers from discussing details related to the case.

“The motion for contempt shows … how threatening it is to the company that more people are becoming aware of this issue,” Katrina Abarcar, a paralegal who participated in the mission, told IPS.

“The defendants are doing whatever they can to keep a lid on the exploitation … even going so far as to allege that the Justice for GIS Filipino Workers campaign is just a façade set up by lawyers.”

She adds that all of the groups supporting the campaign have extensive involvement defending migrant and workers’ rights, and they now “pledge their continuing support of the former GIS workers until the truth is revealed and justice is served.”