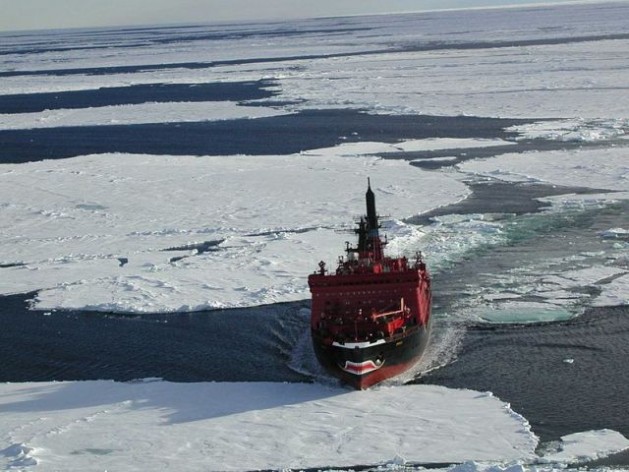 Rising temperatures mean the vast Arctic Ocean, which used to be frozen over for much of the year, is now an open shipping line for more than half the year. Credit: public domain

WASHINGTON, Feb 6 2013 (IPS) - Environmentalists are warning that a meeting of environment ministers that took place Monday in Sweden has agreed on a weak and inadequate response plan in case of an oil spill in the Arctic Ocean.

According to Greenpeace, an environment watchdog, a leaked copy of the document suggests that the eight member states that make up a group dubbed the Arctic Council have failed to agree on the technical details necessary for dealing with a large-scale disaster, even while it opens the way for increased drilling and oil exploration in the Arctic.

“We are unimpressed by what we’ve seen from this totally inadequate document,” Ben Ayliffe, a Greenpeace campaigner based in Washington, told IPS. “It does nothing to prepare governments for dealing with disasters or for protecting the Arctic from disasters.”

According to the United Nations’ global climate office, Arctic sea ice reached its lowest level on record in 2012. That process, which overwhelming scientific data attributes to human-induced climate change, has created a virtual gold rush to the Arctic.

Rising temperatures mean the vast Arctic Ocean, which used to be frozen over for much of the year, is now an open shipping lane for more than half the year, on average. This has resulted in a scramble to lay claim to Arctic territory, which is estimated by the U.S. Geological Survey to contain 22 percent of the world’s undiscovered energy resources.

However, environmentalists are concerned that no mechanisms are in place to prevent or respond to an environmental disaster.

According to Richard Steiner, a biologist and expert on oil spills based in Alaska, this past summer, a record 46 merchant ships transited through what is known as the Northern Sea Route, a 10-fold increase from just two years ago. “There has been an extraordinary increase in shipping across the Arctic Ocean, mainly with very hazardous petroleum products on board,” Steiner told IPS.

He also warns that an increase in offshore oil and gas drilling potential in the Arctic demands robust laws. Yet, he says, the Arctic Council agreement has no technical performance standards, enforcement mechanisms or operational guidelines.

“They are charging forward with this Arctic offshore oil drilling development and shipping without the proper safeguards in place, and it’s really tragic,” Steiner said. “I’m afraid they are going to wait for a big spill disaster before putting the right systems in place.”

He added that this is what happened with the Exxon Valdez case, when an oil tanker ran aground in Alaska in 1989.

“I’m afraid this is what’s going to happen in the Arctic, too,” he continues. “Despite the lessons learned … very little has changed as far as prevention policy is concerned.”

The Arctic Council, established in 1996, is made up of states with territory in the Arctic, and comprises Canada, Denmark (including Greenland), Finland, Iceland, Norway, Russia, Sweden and the United States. The new oil spill treaty will be formally voted upon by members in May, and would become the second binding agreement reached by the Arctic Council since a search-and-rescue agreement was signed in 2011.

Yet Ayliffe says the document doesn’t adequately deal with the complex issues involved with a potential spill.

“It’s a nightmare scenario,” Ayliffe says. “The technical difficulties of responding to a disaster a mile beneath the ice make the kind of operation that BP had to do in the Gulf impossible in the Arctic.”

Despite earlier assurances by the Arctic Council that any agreement would include specific environmental protections, including oil spill recovery and prevention strategies, Ayliffe says the agreement “fails to outline any essential response equipment, methods for capping wells, or cleaning up oil-affected habitat and wildlife, relying instead on vague statements of steps Arctic nations should take within available resources.”

The document contains ambiguous language regarding oil spills, only asking countries to take “appropriate steps” to deal with a spill, without specifying clear demands or requirements. It also lacks guidelines relating to the liability of oil companies in case of a disaster or guidelines on how to adequately deal with a spill.

“No oil company has ever proven it can respond to an oil spill in ice, and the agreement offers nothing in regard to how a company would stop or clean up a Deepwater Horizon-style disaster,” Ayliffe said, referring to the massive 2010 spill in the Gulf of Mexico, when nearly five million barrels of oil spewed from a blown oil well in the sea floor for nearly three months.

“We are hoping that, because of the outrage that has been caused by this document, before the May vote there will be time to fill some of the holes.”