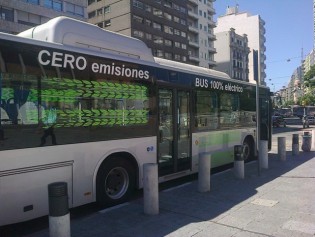 By Inés Acosta
Uruguayan schoolchildren are learning that cookies, candy, potato chips and soft drinks are bad for their health. Some schools have taken the initiative and banned junk food from school snacks.

By Inés Acosta
Uruguay needs to reinforce and expand its electric power grid to absorb the 1,200 megawatts of wind energy that it plans to generate by 2015.

By Inés Acosta
A record number of sea turtles are turning up on Uruguayan beaches along the Atlantic Ocean and Río de la Plata this Southern hemisphere winter, suffering from cold shock and hypothermia.

By Inés Acosta
The government of the Uruguayan capital plans to reduce greenhouse gas emissions from the solid waste produced by its 1.3 million inhabitants, through a project set to enter into operation in March. The carbon credits generated will be purchased by the World Bank.

By Inés Acosta
The waters of the Río de la Plata (River Plate) estuary flowing into the Atlantic Ocean suffer the effects of poor management along the Uruguayan coast, though there are some signs of improvement.

By Inés Acosta
Water-borne diseases and illness related to natural disasters are on the agenda for plans of officials and civil society to help the precarious settlements in the outskirts of the metropolitan area of Montevideo and in other Uruguayan cities.

Tools Needed for Those Most Vulnerable to Climate Change

By Inés Acosta
A global forum in Uruguay is evaluating the country's plans for dealing with the problems that arise from increasing variability and unpredictability of the climate, especially for poorer populations.

By Inés Acosta
More and more Uruguayans are keen on building ecological homes. The problem is that there is hardly any market or specialised labour for what is known as "bio-building."

Uruguayans Return to Mud and Straw

By Inés Acosta
Soil and straw from the Uruguayan plains were the raw material for the homes of the indigenous peoples over the millennia, and they are in demand again.

By Inés Acosta
Marisabel's modest home had no plumbing, like the rest of the dwellings in this poor suburb on the outskirts of Montevideo, the capital of this small South American country.
ADVERTISEMENT ADVERTISEMENT