MONTEVIDEO, Jan 18 2012 (IPS) - The government of the Uruguayan capital plans to reduce greenhouse gas emissions from the solid waste produced by its 1.3 million inhabitants, through a project set to enter into operation in March. The carbon credits generated will be purchased by the World Bank. 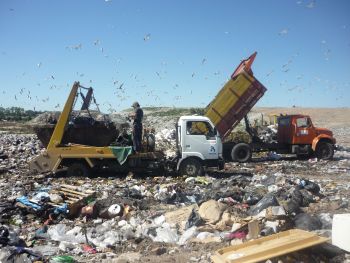 The Landfill Gas Recovery Project being undertaken by the Intendencia de Montevideo (IM), the city government, encompasses the design, construction, operation and monitoring of a plant for the capture, extraction, treatment and burning of methane gas released by a municipal urban waste landfill.

“Work on the plant should be completed in March, and the company responsible, Aborgama SA, will operate and monitor the system for a year, during which time we will determine whether it is performing up to its expected capacity,” Jorge Alsina, the technical coordinator of the IM Department of Environmental Development, told Tierramérica.

Around 2,200 tons of solid waste are dumped daily at the Felipe Cardoso Final Waste Disposal Site, a vast area with numerous treatment plants located in the southeastern Montevideo neighborhood of Malvín. An endless stream of garbage trucks drive around the site clearing a path through thousands of seagulls scavenging for food.

The waste is then compacted and buried with special machinery, which implies the constant growth of the landfill.

Two processing plants at the Felipe Cardoso complex were permanently shut down in the late 1990s because they had reached their full capacity, leading to the creation of what is now a sort of “green mountain” 40 metres in height.

This mountain of waste gives off methane gas, which is 25 times more potent as a greenhouse gas than the carbon dioxide (CO2) released by the burning of fossil fuels, according to specialists on the subject.

“The methane gas is captured through a system of wells constructed on the site, and is then extracted and transported through a series of pipes where it is subsequently cleaned and burned,” Manuel Luengo, senior specialist at the World Bank Carbon Finance Unit, explained to Tierramérica.

When the methane is burned, CO2 is released into the atmosphere, but since it has a less harmful greenhouse effect, the environmental impact and contribution to climate change is reduced.

For his part, Juan Canessa, director of Environmental Development at the IM, told Tierramérica that “solid waste is the second leading source of emissions (of greenhouse gases in Montevideo) after electricity generation.”

“The Clean Development Mechanism (CDM) project agreement signed between the IM and the World Bank is aimed at reducing the greenhouse effect produced by the release of this gas,” said Luengo.

Under the terms of the agreement, the World Bank will purchase 377,500 carbon equivalent credits, which is 50 percent of the projected value of the emission reductions that the IM will achieve when it extracts and burns the methane gas during the 2012-2017 period.

Luengo added that the agreement also includes “the option to purchase the remaining 50 percent if the estimated amount is produced, although historically in CDM landfill projects the generation of credits has been less than foreseen.”

However, if 100 percent of the credits stipulated are produced, “the World Bank would be interested in purchasing them,” he said.

Alsina explained that each ton of CO2 equivalent that is prevented from being released into the atmosphere generates one carbon credit. The price of these credits could drop by the end of the year due to the uncertainty looming over the market in the absence of an international agreement on climate change.

There is also the possibility of generating electricity with the captured methane, although, according to Canessa, a concrete agreement in this regard has yet to be reached, and it will partly depend on the amount of gas that is successfully captured.

The IM is currently working on a number of other projects to improve waste management. This month construction will begin on a treatment plant for the liquid waste resulting from the leaching process, at a cost of 75 million pesos, Canessa reported.

A plant is also being constructed for the disposal of hazardous industrial waste, financed and managed by the Uruguayan Chamber of Industry, and another for public works waste, which cannot be compacted and is not biodegradable.

But these advances are not enough to ease the concerns of city authorities, who are worried by the limited space left for the continued growth of the sanitary landfill at the Felipe Cardoso site. Alsina estimates that there will be room to continue processing waste until 2018.

Canessa, however, is confident that the IM will be able to reduce the volume of solid waste transported to the municipal dump through the sorting and separation of trash in households to facilitate recycling.

“There are mountains of garbage that we have to dig through by hand, because of the lack of infrastructure and machinery,” Rodríguez told Tierramérica. “All we have is the manpower and the desire to progress. We are warriors against pollution,” declared the leader of the cooperative created five years ago, now made up of some 60 members.

When questioned by Tierramérica about the social impact of the Landfill Gas Recovery Project, Ricardo Schusterman, a consultant and social specialist for the CDM project, maintained that “in all projects financed by the World Bank, we verify that actions to be undertaken will not lead to negative social impacts or, failing that, the impacts will be minimised and compensated.”

“I understand that COFECA is facing difficulties in its organisation as a cooperative, and as a result the IM has not disbursed the financial assistance that had been allocated to it to improve working conditions,” he explained.

According to Schusterman, “the World Bank will continue supervising the strengthening of COFECA by the IM in order for its members to benefit from improvements in working conditions,” as well as to meet the IM’s own goal of reducing the amount of solid waste buried in the landfill.